Les Miles to be Featured on SPIKE TV's 'Sod Wars' 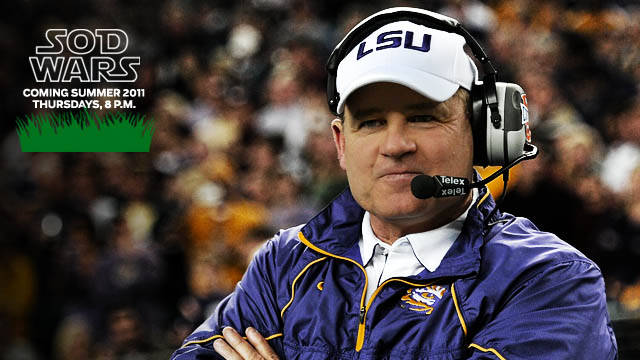 Sod Wars pits two homeowners against each other to determine who has the best yard in the neighborhood. Each contestant is given a $10,000 budget for the week to create a dream landscape in their yard, with celebrity judges determining the winner.

Within the week-long period there will be bonus points based on challenges and obstacles such as wild animals and destruction of flower beds with explosives that wreak havoc on the contestants.

Miles was asked to be on the debut episode by the show’s executive producer, Bob Sacamano.

“Having Coach Miles involved in the premiere episode is an absolute coup,” Sacamano said. “Think Star Wars meets Curb Appeal mixed in with elements of the Amazing Race and the excitement of Survivor and you have Sod Wars. Coach Miles will have a significant role in the series premiere being a part of one of the sod taste-test challenges and serving as the celebrity judge.”

Miles, who starts his seventh year with the Tigers in 2011, became a fan favorite of yard enthusiasts everywhere in 2010 when he was seen on national television sampling a piece of turf from Tiger Stadium prior to big play late in the fourth quarter in a win over Alabama. Since then, Miles has become a coveted spokesperson for many lawn and garden companies throughout the country.

“This opportunity came about at the right time,” Miles said. “I have always enjoyed reality television and the want to be a part of a project with Bob Sacamano is something that has always interested me. I take pride in both of my yards – the one at my house and the one in Tiger Stadium. I think with my expertise in grass growing and my ability to spot talent makes this a perfect fit. I can’t wait to get started.”

Sod Wars will be hosted by David Puddy, no stranger to reality television as he has hosted the popular syndicated shows Grease Monkeys and Devils Fandom.

“I am totally stoked about Coach Miles on the show,” Puddy said. “Nobody in the sports world screams reality television more than Les, plus I am a huge football fan, the kind of fan that paints his face. Having Les involved is going to make it a smashing success.”

For more information visit www.sodwars.com, and get updates about the show at twitter.com/sodwars.