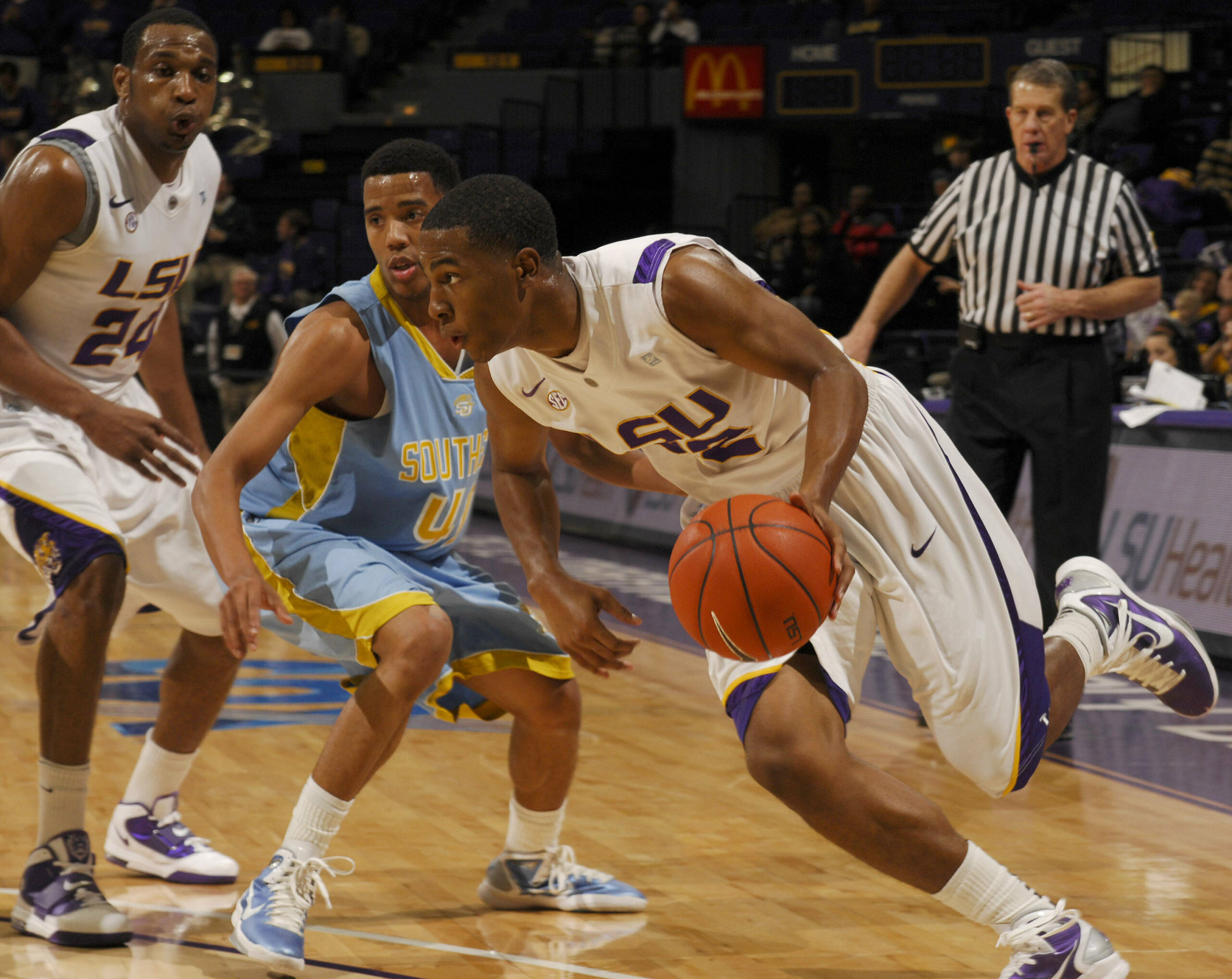 BATON ROUGE – The LSU men’s basketball team held Southern to just 12 first half points and then used the offense of Ralston Turner and Malcolm White to score a 62-41 win over the Jaguars Monday night at the Pete Maravich Assembly Center.

The Tigers are now 8-5 on the season going to Houston for a Wednesday night game with Rice while Southern loses for the ninth-consecutive game to fall to 1-11 on the year.

White, coming off the bench for the first time, recorded his second double double of the year with 16 points and 11 rebounds in 24 minutes, hitting 7-of-11 field goals, while Turner had 15 points in 26 minutes with three treys.

After Southern jumped out to a 2-1 advantage in the first two minutes the Tigers scored 10 straight points to go out to an 11-2 advantage. The Tigers stalled the cold-shooting Jaguars most of the way, jumping out by 10, 17-7 with 7:35 to go in the game while LSU finished with a 7-1 run to go up 28-12 at the intermission.

Southern shot just 4-of-26 from the field in the opening 20 minutes, while LSU had 10 field goals, shooting 30.3 percent. Southern got the lead down to nine four minutes deep into the second half, but the Tigers offense came alive and didn’t allow the cross-town rivals to get any closer.

LSU had a good night in the assist-to-turnover categories with 16 assists (to 23 made buckets) and just 11 turnovers and out rebounded the Jaguars, 45-39.

LSU and Rice meet Wednesday at 7 p.m. at the Tudor Fieldhouse in a game televised by CBS College Sports. The Tigers final non-conference game is Sunday at Virginia on FSN’s ACC Sunday Night Hoops. The Tigers open SEC play on Jan. 8 at Auburn. LSU’s next home game isn’t until Jan. 12 against Arkansas, one of just two home games for LSU in the month of January.

On if he was worried about the offense at halftime …
“Quite frankly I wasn’t even worried about the offense. The offense wasn’t a concern. The only thing we talked about going into this game was holding this team under their average of 58. Obviously if you want to talk about offense, basketball is a game of rhythm. We had Christmas break for a few days, we came back and had a hard practice (Sunday). Our shoot around wasn’t really a shoot around, it was a practice based off of defense. Again, as much as everyone wants to talk about offense and scoring, this basketball team needs to develop an identity where their defense, rebounding and their effort dictates how good they feel about themselves. That is going to put us in situations to win games. I have said this before, and I’m going to share this with you because I share it with them all the time, if we get three more stops, if we get two more block outs and if we come up with two more loose balls we would probably only have two losses. What does that have to do with the big scheme of things? It just puts a band-aid on it because we are not very good consistently in effort, rebounding and taking care of the ball. I wasn’t concerned about offense.

“The reason I started Garrett (Green) over Malcolm (White) is because the day before the game we break down and go one-on-one and the winner will have an opportunity to start. The reason we go one-on-one is because defensively you are keeping people out of the lane, you are putting a body on a guy and if you are blocking a guy out you are going to rebound the ball. It was a very competitive drill, and Garrett beat Malcolm 10-2. Moving forward everything we do from a standpoint of defending, rebounding and taking care of the ball we will work on in practice, but we are going to have to take it to another level because that is going to give us a chance to compete.”

“I am not one who feels sorry or worries about that stuff. It is like I tell them, and I know they understand it but sometimes it is hard for them to understand it, but you don’t worry about your fouls, your points, or your rebounds, you worry about winning. We won. They are lifting right now, when they get through lifting we will have another meeting and then we will get on the bus tomorrow and head to Rice.”

“As opposed to coming back and breaking down video and talking about it, you have to get out there and let your actions speak for you. Understand that what happened three or four days ago is not acceptable. We have to put in as many competitive drills as possible, and that means you have to sacrifice parts of your practice and for us that is offensively. We will get back to that tomorrow, but it doesn’t have to do with the youth of the team it has to do with the lack of competitiveness up front. There is no way around it, you have to put guys in situations where they are going up against each other where they are out of their comfort zone and everything is physical. They have to fight through that.”

Opening Statement …
“Defensively I think we did everything we wanted to do. Rebounding wise it was nip and tuck, but it wasn’t that bad. Offensively we were awful. I haven’t seen so many balls on our end go in and out of the basket, they were right there and those balls could easily have fallen. You get those easy ones and do a little better on the free throw line it could have been an interesting game.”

“As a team you have to take advantage of the situation offensively. We only went 1-for-10 from three, and we missed some close shots there. Those things are correctable and everything that happened to us out there is correctable. We have a week now to work on some things to get better leading into conference play. We will see what we can get accomplished over the next week, but we have to shoot the ball better and we have to execute better offensively. Our execution wasn’t all that bad at times, we just couldn’t make anything.”

On what positives he takes into conference play …
“I think the intensity level and the effort, and the mental concentration that we have been working on. Those things mean we are going to have chances in every game, but what we do offensively is going to be the key. We need to get Blake (Sanford) shooting the ball and we have to get Julius (Ingram) to give us what he has given us. We need Jameel (Grace) to be a point guard and orchestrate things, and if we can get those things we have a chance.”