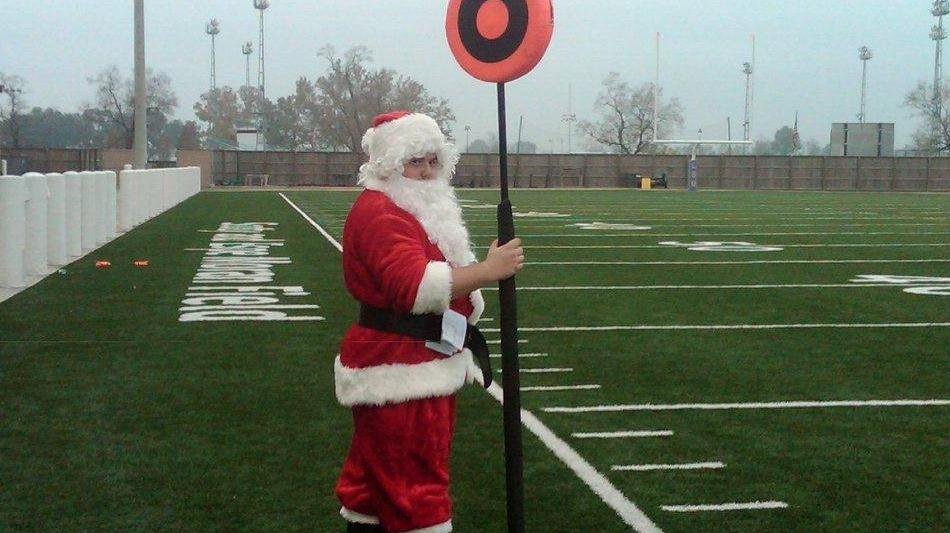 BATON ROUGE – Les Miles sent the LSU football team off on Christmas break on Wednesday but not before the 11th-ranked Tigers went through one final practice as preparations for the 75th annual AT&T Cotton Bowl continued at the Charles McClendon Practice Facility.

LSU goes into the game with a 10-2 overall record, while Texas A&M is 9-3 overall after closing its regular season with six straight wins.

The Tigers got an early start on Wednesday, hitting the practice field at 6 a.m. The practice was the sixth for the Tigers. LSU will return to campus and practice on Dec. 27. LSU departs for the Cotton Bowl on  Jan. 1.

Before hitting the practice field on Wednesday, Miles led the team in the singing of a couple Christmas carols, including Rudolph the Red Nosed Reindeer and Jingle Bells. Miles also said that there was a Santa Claus sighting at practice as one of the equipment managers went through the entire workout wearing a Santa outfit.

“We started the day by singing Christmas carols during our team meeting,” Miles said. “After that, we went out and had a good practice. It was a shorter practice, but we got a lot done. We’re going to give them a few days off for Christmas and bring them back on the (December) 27th.

“We are making progress and getting better each day. I like what I’ve seen out of the team during these first six practices. We still have a lot to do once we get back but I think we’re off to a good start.”

The Cotton Bowl matchup between the Tigers and the Aggies will be the first meeting between the teams since the season-opener in 1995 when Texas A&M posted a 33-17 win over LSU in College Station.