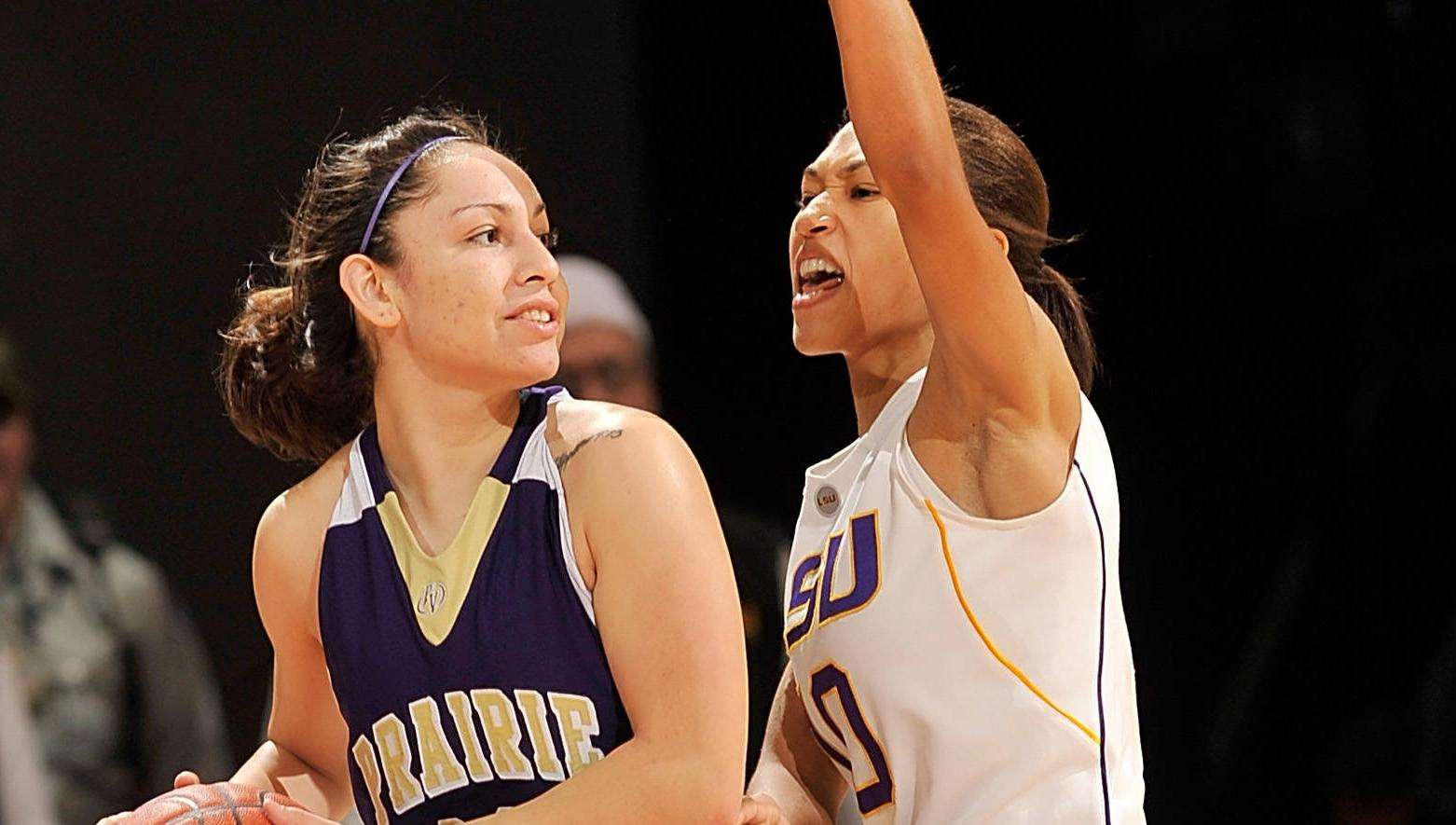 BATON ROUGE — Courtney Jones and Adrienne Webb poured in 18 points apiece and the LSU women’s basketball team overcame a five-point second-half deficit with a decisive 17-2 run to put away Prairie View A&M for a fifth straight victory by a score of 70-48 on Tuesday night at the Pete Maravich Assembly Center.

The Lady Tigers (9-4) saw an eight point first-half lead turn into a 31-28 halftime deficit after the Lady Panthers shot a blistering 55.0 percent (11-of-20) from the floor in the first 20 minutes, including a 6-of-8 effort from three-point range.

Prairie View (4-5) was playing its first game in 10 days, while LSU was putting the finishing touches on a stretch of four home games in eight days. The Lady Panthers dressed only eight players and ran out of gas in the final 12 minutes of the game.

“In the first half, Prairie View made some shots, and they made some plays,” said LSU head coach Van Chancellor, who won his 80th game at LSU.  “Give them credit. The second half was 42-17, but in the first half, they were knocking down everything.”

Jones turned in her second straight 18-point game and Webb scored all 18 of her points on six treys. The six three-pointers tied for the seventh-most in LSU single-game history and the most since Allison Hightower buried six at Alabama last season.

Katherine Graham scored all 10 of her points in the second half, and LaSondra Barrett reached double-figures for the seventh straight game with 10 points.

“It’s hard to believe she (Webb) made six,” said Chancellor. “I didn’t realize she made six threes. I thought that was a major contribution, but I thought Courtney off the bench was pretty salty.”

Prairie View held its largest lead after a Latia Williams jumper made it 38-33 with 15:58 to go in the game. LSU then mounted its comeback with a 17-2 spurt over the next five minutes that turned the margin to a 50-40 Lady Tiger lead.

Webb and Jones got it going with a three and a putback on a foul. Jones missed her free throw but Graham gathered the offensive rebound and got it back to Webb for another trey from the corner. Graham converted her first shot attempt of the game on a lay-up with 12:30 remaining.

Jones knocked down a pair of free throws to culminate the run. Meanwhile, Prairie View cooled off from the floor and did not record a field goal for over six minutes. The Lady Panthers got within six points, but LSU put the game away with a 10-0 run in the final minutes.

The Lady Tigers outscored Prairie View 42-17 in the second half. LSU improved to 53-5 when holding an opponent to 50 points or less under Chancellor. LSU finished at 45.5 percent shooting for the game.

The Lady Tigers break for the Christmas holiday and return back for practice on Dec. 26. LSU then faces one final non-conference challenge at undefeated and ninth-ranked UCLA on Dec. 28 in Los Angeles. Tipoff is scheduled for 9 p.m. CT from Pauley Pavilion.

On the holiday plans …
“The majority of us are going home tomorrow morning, and then we have practice on the 26th at 4 p.m. so we have to be back by then to get ready for UCLA.”

On what she has done to work on her three point shooting …
“I think getting in the gym more and working on my outside shot. Also just being able to read where the gaps are in the offense so I can make myself available for the shot.”

On coming out flat in the first half …
“I think we came out a little over excited. I don’t think we were rushing, I think a lot of times we come out and force it in and overdo it, but we should have just come out relaxed and play our game.”

On the three-point shot by Adrienne Webb after the missed free throw to put LSU up …
“It gave us some momentum. (Adrienne) Webb has been shooting the ball very well throughout the season, and when she knocked it down you could tell that the whole bench, crowd and fans were excited. It really gave us a push and got us excited.”

On shutting down Prairie View A&M’s three-point shot in the second half …
“Their three point shots were pretty good, but we just had to play them a little more tight and take away the shots. We had to take away the easy baskets.”

On her second straight good game …
“I just think I was a little more relaxed. The last couple of years I have been going full speed on offense, and I think this year I found my roll on the team and it’s the screen. A lot of times they say the person setting the screen is the one who will eventually be open, so I just screen, screen, screen and then make a second cut and have the shot.”