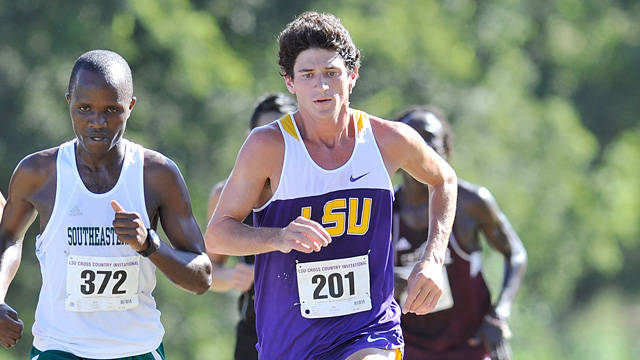 BATON ROUGE — The LSU men’s and women’s cross country teams’ seasons recently came to an end at the NCAA South Central Regional. Despite failing to advance to the NCAA Championships, the Tigers and Lady Tigers compiled successful seasons.

At the prestigious Chile Pepper Festival, the Tigers and Lady Tigers battled some of the country’s top competition, including eventual men’s national champion Oklahoma State, and came away with 25th and 26th-place finishes, respectively.

The 2010 SEC Championships saw the men finish in the midst of a four-team jumble, claiming a ninth-place result. Meanwhile, the women left Hilton Head, S.C., with an 11th-place finish. While the teams did not place as well as they had hoped, individually, many runners ran strong races.

“Everyone ran better at this season’s conference meet,” Elliott said. “Even though the course was easier, I was pleased with everyone’s effort.”

The teams closed out the season at the NCAA South Central Regional in Waco, Texas, where the Tigers and Lady Tigers fought to come away with respective 14th and 16th-place finishes.

Individually, the men were led by senior Richard Chautin. After sitting out the 2009 season, Chautin closed out his career as a Tiger in grand fashion. The Arnaudville, La., native collected three top-five finishes, led the Tigers in each of their six races and was recently named to the 2010 All-Louisiana team by the LSWA.

“Richard was very consistent the entire year,” said Elliott. “He had a great season.”

Seniors Ken Ehrhardt, Kyle Hecker, Alan Sticker and Sean Swanner and junior Paras Shah all had productive seasons as well. Sticker and Swanner each came away with season-best finishes at the SEC Championships while Ehrhardt’s best race came at the MSU Invitational where he finished 20th. Hecker and Shah picked up their best results of 2010 at the four-mile McNeese Cowboy Stampede, earning respective 22nd and 36th-place finishes.

The Lady Tigers were led in 2010 by junior Laura Carleton, who paced the team in five of its six races, gathering three top-10 finishes in the process. The all-state selection set career-best times in both the 5k (18:03.61 at Chile Pepper Festival) and 6k (21:24.28 at LSU Invitational).

“Laura had a very good season,” Elliott said. “The thing about both Laura Carleton and Richard Chautin is, outside of being very good runners, they are also terrific students.”

The women’s team was greatly benefited by the additions of twin sisters Brea and Dakota Goodman who transferred to LSU from Nicholls State prior to this season. Both Brea and Dakota accumulated a top-ten finish at the MSU Invitational as well as top-20 results at the LSU Invitational. In addition, Dakota led the Lady Tigers at the NCAA South Central Regional, placing 60th with a 6k time of 22:12.90.

Lauren Ybarzabal, the lone senior that competed in 2010, managed to close out her career at LSU with her best performances. She set a career-best 5k time at the McNeese Cowboy Stampede and ran her best 6k race at the LSU Invitational, finishing with a time of 22:34.35.

After starting the season slow due to injury, sophomore Charlene Lipsey ended 2010 with two top-20 finishes. Her best race came at the McNeese Cowboy Stampede where she finished fifth and set a career-best 5k time of 18:14.06.

The sophomore quartet of Laura Aleman, Anna-Cherie Daigle, Leigh-Ann Naccari and Hope Phelps along with junior Lindsay Roe also provided the Lady Tigers with strong depth this season. They all racked up career-best times in the 5k and 6k while Aleman and Daigle collected top-20 finishes at the MSU Invitational and Naccari placed in the top 20 at both the MSU Invitational and McNeese Cowboy Stampede.

“Hopefully everyone that is returning next year will improve and we can be even better next year,” said Elliott. “We lose Lauren Ybarzabal from the women’s team and several guys off the men’s team. As long as we lose them to graduation, I am ok with losing them.”