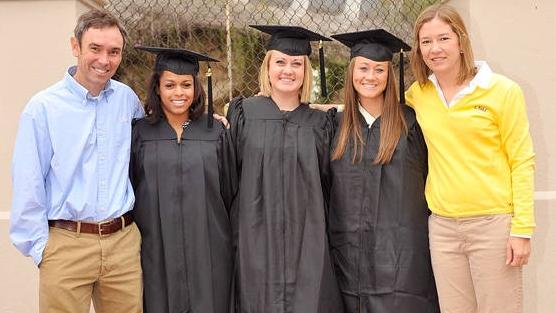 BATON ROUGE – On Friday morning, four distinguished members of the LSU soccer program officially closed the book on their collegiate careers and opened a new chapter of their lives as college graduates following commencement ceremonies held on the LSU campus.

Following their senior seasons in 2009, former LSU soccer stars Nikki Bush (general studies), Brittany Lowe (English) and Malorie Rutledge (general studies) fulfilled their educational requirements to earn a degree from LSU as each walked with their classmates during Friday’s exercises.

Senior standout and 2010 team captain Courtney Alexander (kinesiology) also earned her degree this fall while competing in her final season with the Tigers on the soccer pitch.

These graduates have continued in the tradition of excellence established by the LSU soccer program over the last six seasons under head coach Brian Lee. In 17 seasons as a head coach at Furman and LSU, Lee has witnessed 100 percent of athletes completing their four years of eligibility in his program earn degrees as college graduates before establishing successful careers in their respective professions.

Their success on the field is just as impressive as Bush, Lowe and Rutledge were part of the winningest senior class in the history of the LSU soccer program while compiling a 50-21-17 overall mark with three SEC Western Division championships and three NCAA Tournament appearances from 2006-09.

“I am so proud of these four young women for their commitment to this program both on the playing field and in the classroom and that they can now enter a new chapter of their lives as college graduates,” Lee said. “For me to have the opportunity to see them mature and grow as students, players and people during their time at LSU has been very rewarding as a head coach.

“Carole Walker and the staff at the Cox Academic Center for Student-Athletes deserve a special word of commendation today. She is so much more than an academic advisor to our athletes and the role she plays in making days like this happen for them cannot be overstated.”

The LSU soccer program is recognized each year with its performance on and off the field in representing the University, which also includes community service in addition to athletics and academics.

The team has been the recipient of the Tiger Cup for team performance in each of the last two years as the Tiger Athletic Foundation has honored LSU soccer as being the leading athletic program on campus when combining a program’s final conference and national ranking with its cumulative grade-point average and community service hours accumulated off the field during the previous academic year.

“We take great pride in our program in the way we represent LSU in all aspects. Our kids are deserving of the recognition they’ve received over the last few years,” Lee said. “There’s no doubt that our players can be 100 percent sure that if they commit themselves to this program for four years and meet the standard of excellence that’s been set before them that they will leave LSU as a graduate with their degree.”