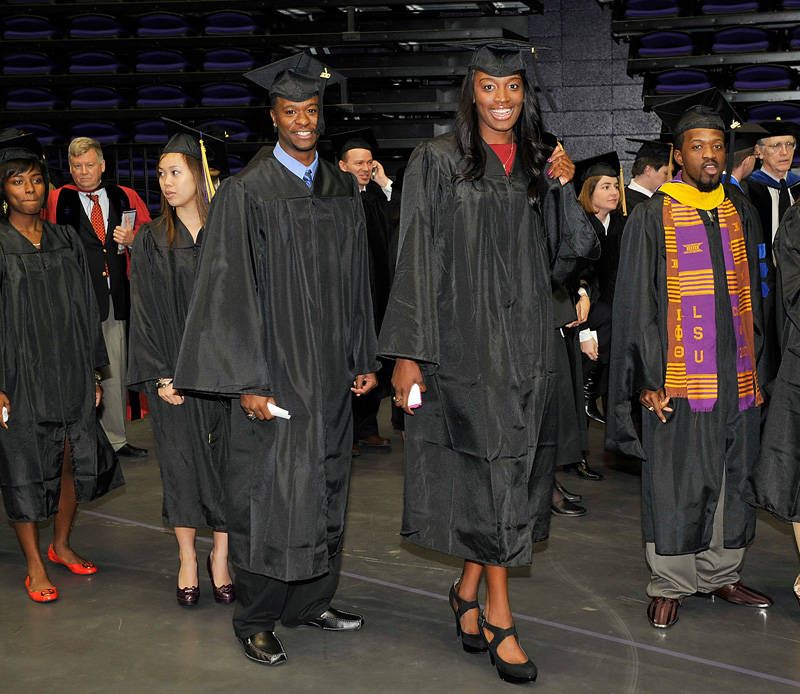 Football shared the top honors with eight graduates highlighted by a trio of defensive standouts Lazarius Levingston, Drake Nevis and Kelvin Sheppard. Both Nevis and Sheppard were named All-SEC First-Team performers by the Associated Press and SEC Coaches. Nevis, who also earned second-team All-America honors, headlined the Tigers with 13 tackles for loss, six sacks and three forced fumbles, while Sheppard racked up a team-best 108 tackles to eclipse the century mark in each of the last two seasons.

On the women’s side, Kim Williams was an All-SEC hammer thrower in 2009 after a runner-up finish at the outdoor championships. She also competed at the NCAA Championships in 2010.

Soccer produced a quartet of graduates. Malorie Rutledge was the most decorated player to ever wear the LSU uniform after being named a three-time All-American. She racked up 2008 and 2009 SEC Offensive Player of the Year award. Her 46 assists and 28 goals are second and fourth on LSU’s career list, respectively.

Three gymnasts walked across the stage to collect their degrees. Susan Jackson has collected a multitude of prestigious awards, including 2009-2010 Roy F. Kramer SEC Female Athlete of the Year, the Honda Sports Award and 2010 SEC Gymnast of the Year. A winner of 12 All-American honors during her career, Jackson captured the first NCAA All-Around national title in LSU history and also won the NCAA Balance Beam title in 2010.

Women’s basketball star Allison Hightower, a member of the WNBA’s Connecticut Sun who graduated in the spring of 2010, walked across the stage on Friday. Hightower was unable to attend graduation last spring due to the WNBA schedule so she was allowed to participate in Friday’s ceremony. Hightower was a two-time All-America who finished her LSU career with 1,509 points and 89 blocked shots

After earning 2009 SEC Player of the Year, Brittnee Cooper joined Monique Adams and Angie Miller as the only volleyball players in school history to earn AVCA All-American First-Team status. Her .409 hitting percentage in 2009 was a program single season record. She also ranked fifth with 504 career total blocks.

Softball was represented by Rachel Mitchell, who finished her career as LSU’s all-time home run leader. The historic blast came during a nationally-televised contest against Georgia in 2010. She garnered multiple NFCA All-South Region honorees. The LaPorte, Texas, product also is among LSU’s Top 7 in nine other offensive categories, including hits, RBIs and runs scored.