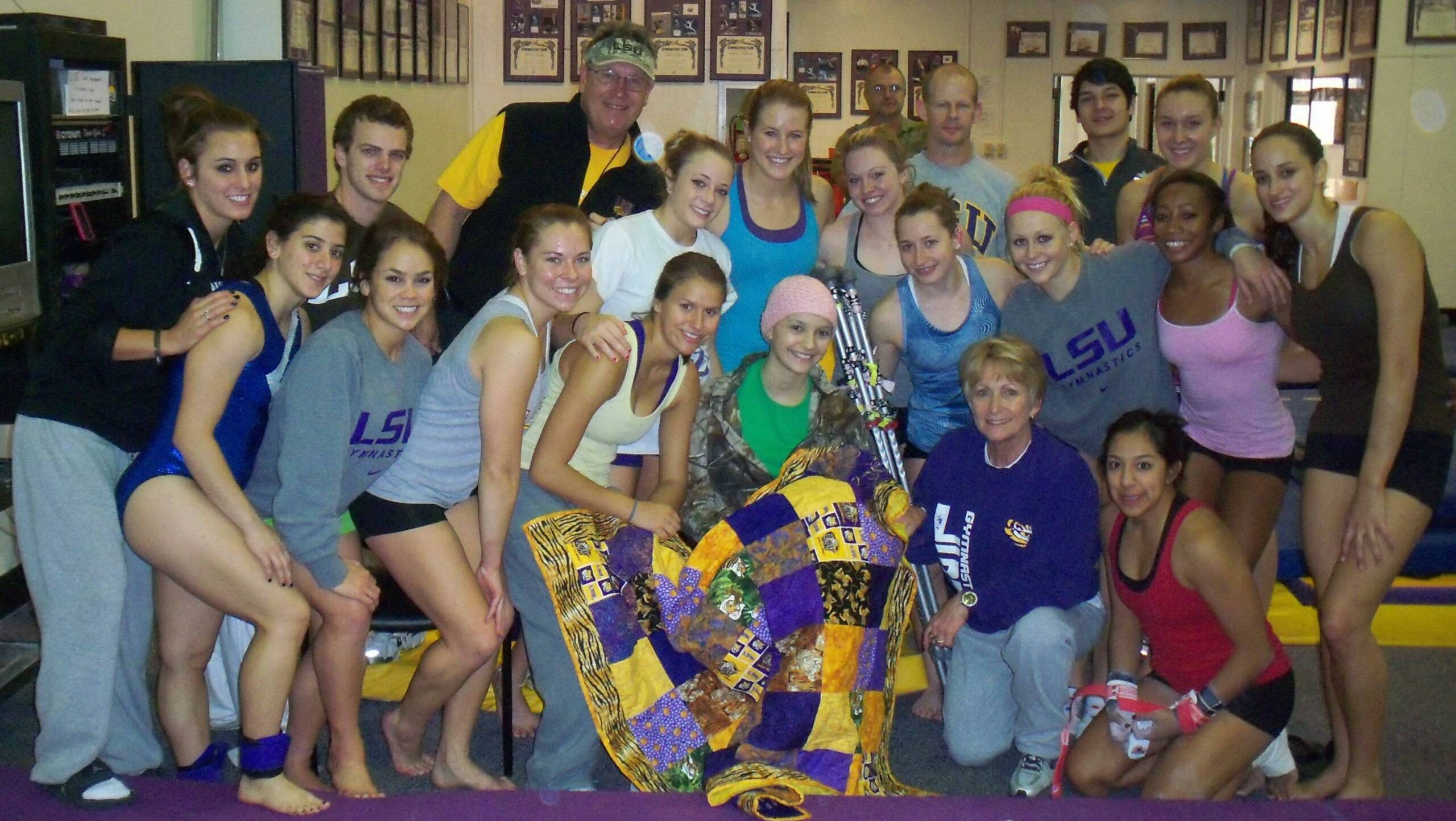 BATON ROUGE – The LSU gymnastics team had the pleasure of meeting with local gymnast Brenna Huckaby to offer encouragement after practice Thursday.

Huckaby, 14, has osteosarcoma which is an aggressive form of bone cancer, and the Baton Rouge native has undergone chemotherapy and has also had an above-the-knee amputation on one leg.

However, she and her family are determined to put up a fight. Brenna is currently doing physical therapy as well as more chemotherapy, and she is working toward being fitted with an artificial limb to start walking again.

Brenna is a level 9 gymnast and wants nothing more than to experience the thrill of tumbling on the floor exercise mat again.

“I really want to be a coach or a judge when I get older,” Huckaby said. “Right now I really want to start doing floor again once I get my prosthetic leg and start tumbling and see how that goes.”

Head coach D-D Breaux arranged for Brenna and her father Jeff to come by the gym after practice because the entire team wanted to meet the girl who refuses to give up on her dreams.

“I’ve known about her for a very long time because the gymnastics community in Louisiana is very close,” head coach D-D Breaux said. “The entire gymnastics community was shocked when we heard of her cancer, so for us to be able to do something that lifts her spirit and takes her mind of what she has faced and what she is facing is comforting to me and my team.”

When Brenna and her father arrived at the gym Breaux presented them with a quilt made by D-D’s mother.

“The quilt is one of a kind,” Huckaby said. “It’s really cute, and it has a collage of different LSU things on it. I love it.”

The entire gymnastics team met with Brenna after she received the quilt and shared words of encouragement.

“It was amazing meeting them,” Huckaby said. “I always see them competing, and I really liked meeting them face to face and talking to them. It was awesome, and I felt like I was a part of the team.”

Breaux said the team was equally as excited to meet Brenna.

“Without really knowing who she was, a lot of the team attended a fundraiser for her in October out of respect for her and the situation, and they came away impressed and humbled by her spirit.”