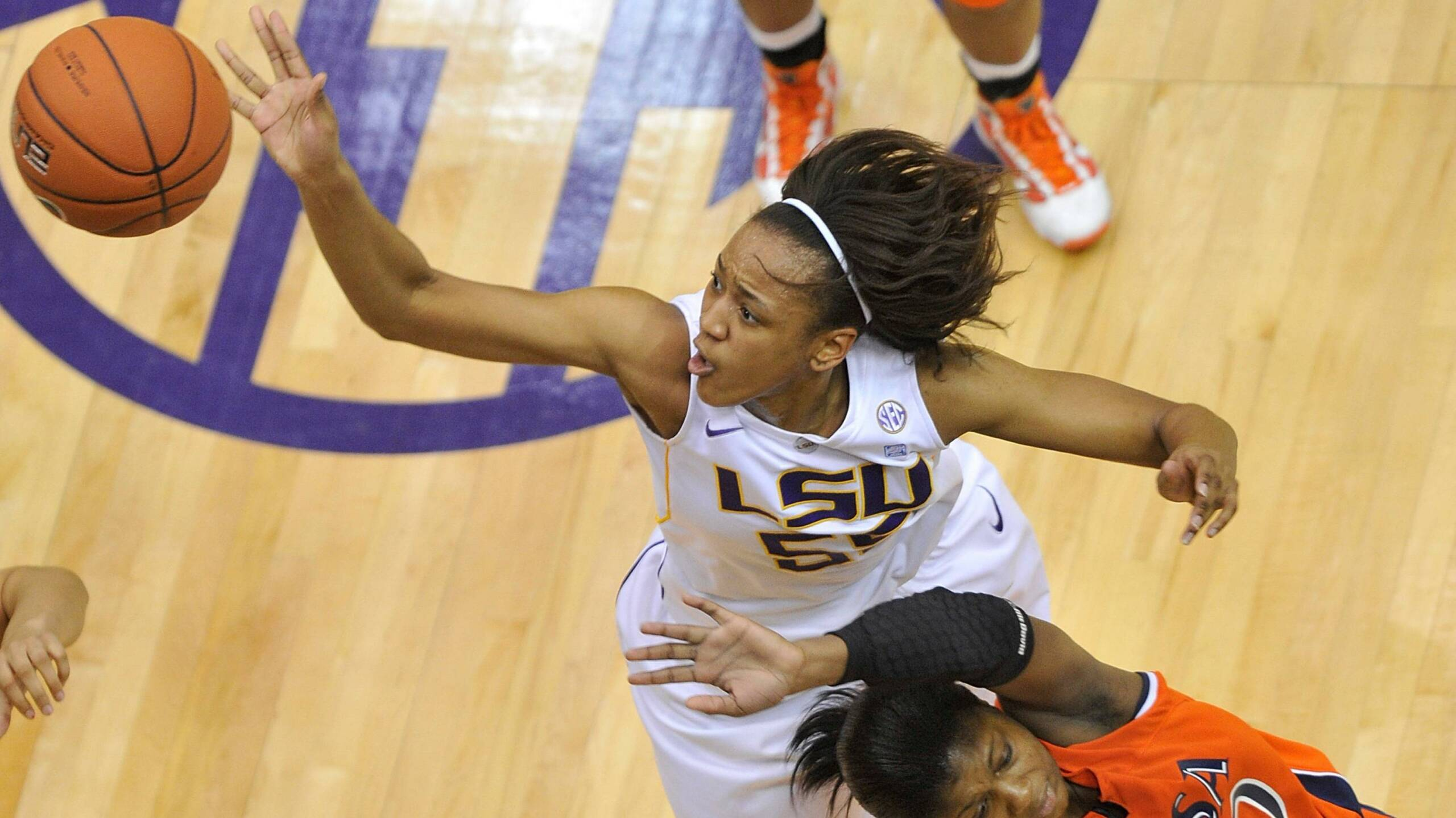 BATON ROUGE – Junior All-Southeastern Conference forward LaSondra Barrett scored a season-high 19 points and the LSU women’s basketball team used a 23-2 run out of halftime to run away from the UTSA Roadrunners, 74-41, in front of a paid crowd of 4,689 on Thursday afternoon at the Pete Maravich Assembly Center.

Over 2,000 elementary school students from the Greater Baton Rouge and surrounding area turned out for the game, creating a boisterous environment for a rare midweek matinee tipoff. They witnessed LSU (7-4) win its third straight game by 30 or more points and stifle the opposition with shutdown defense.

“I thought our first ever (midweek) day game was an outstanding success,” said LSU head coach Van Chancellor. “The elementary students really enjoyed it, and I was thankful that they got to come out and attend. I thought our players enjoyed it.”

Barrett shrugged off a 1-for-6 first half and scored 14 of her 19 points in the second period. Taylor Turnbow grabbed a game-high 10 rebounds and finished with eight points. Bianca Lutley tossed in a season-high 10 points to go along with a career-best six rebounds, and Adrienne Webb had her seventh straight double-figure game with 12 points.

Destini Hughes and Katherine Graham combined for 12 assists, including a career-best seven from Hughes in 17 minutes of action.

It was once again a tale of two halves for LSU, who struggled mightily in the game’s first seven minutes. The Lady Tigers misfired on their first 13 shots and found themselves trailing 11-1 with 14:58 on the clock. UTSA (3-6) scored the game’s first nine points to a stunned crowd.

Webb finally broke the dryspell with the first of three treys on the evening to make it 11-4 with 13:17 to go. That’s when LSU turned up its defensive pressure, holding the Roadrunners scoreless for eight consecutive minutes. The Lady Tigers took their first lead when Lutley buried a three from the top of the key. LSU led 12-11 with 7:56 remaining in the stanza.

The Lady Tigers led by as many as seven points in the first half following a Barrett jumper and they took a 22-18 lead into halftime after a sluggish start.

LSU was in a similar situation on Tuesday against Texas Southern and the Lady Tigers responded the same way, pouring in the second half’s first 10 points. Turnbow ignited the run and was all over the offensive glass, highlighted by a putback with 17:28 left in the game.

“We got more patience,” Chancellor said. “We began to run more plays. We ran a deal called ‘five’, where we make five passes before we shoot. We just began to reverse the ball and go inside out to try and have some offense from patience.”

The impressive spurt grew to a 20-point advantage following another three from Webb that made it 41-20 with 15:39 on the clock. Meanwhile, UTSA found nothing offensively during the 10-minute span, connecting for only one field goal.

Chancellor lifted his starters 10 minutes into the second stanza with the game well decided. Courtney Jones scored on three straight possessions with six points near the eight-minute mark. Lutley buried her second trey with 4:15 to go that increased the lead to 64-34.

The Lady Tigers led by as many as 35 points when Theresa Plaisance got into the three-point contest with one of her own at the 1:22 mark.

After shooting only 18.2 percent in the first half, LSU netted a blistering 56.3 percent in the second frame to finish at 36.9 percent for the game. UTSA finished at 25.9 percent from the floor and committed a season-high 23 turnovers. The Lady Tigers dominated the glass, out-rebounding the Roadrunners, 49-36.

Tickets can be purchased online at LSUtix.net, by calling 1-800-960-TKTS or 225-578-2184 or in person at the LSU Athletic Ticket Office on the first floor of the LSU Athletic Administration Building.

On gameday, tickets go on sale on the upper concourse of the Maravich Center starting at 1:30 p.m. Fans are urged to purchase tickets in advance of gameday to avoid long lines.

Opening Statement…
“I thought our first ever day game was an outstanding success. I thought the elementary students really enjoyed it. I thought our players enjoyed it and I enjoyed the game. I thought everything about it was good except for one thing. Was that one of the worst start in the history of basketball? We went five minutes without scoring, and if you were to tell me we were going to go five minutes without scoring, go seven minutes and score one point, and then score 74 for the day, I’d say that is pretty good. That is pretty good considering we couldn’t have thrown one in form anywhere early in the game. I was proud of our team. We bounced back. I thought Boogie (LaSondra Barrett) got hot at the half and Bianca (Lutley) gave us a real lift in the first half.”

On what contributed to the slow start…
“I don’t think it was the layoff. I think we got in here and all of the elementary kids got to yelling, and we got too pumped up. Maybe we wanted to do too good. We got great looks by shooters that have been making them all year. We just couldn’t knock it down.”

On the early defensive stops…
“They only scored 28 points in the last 33 minutes of the game. Our defense after the score was 11-1 was the best that it has been this year.”

On what sparked the offense…
“We got more patient. We began to run more plays. We run a deal called ‘five’, where we make five passes before we shoot. We just began to reverse the ball and go inside out to try and have some offense from patience.”

On hitting the shots right out of halftime to get back on track offensively …
“It was big. One thing the coaches said at halftime was we let our defense carry us because our offense wasn’t. Our defense is strong enough to get us over that hump, and we knew once we started knocking shots down we would progress the lead even more. Just coming back we had to rely on our defense since the shots weren’t falling.”

On the early start and the loud kids in the stands …
“I don’t think it was the 11:30 a.m. game, it was the 6:30 a.m. shoot around we had. The kids were pretty loud. I was on the free throw line and I couldn’t even hear myself think. It was great to have them come out and to have some fans in here at 11:30 when a lot of people are at work. It was great.”

On finally finding her offensive rhythm in the second half …
“My teammates were telling me the whole time to shoot, I didn’t really want to keep shooting it, but coach kept calling the plays for me. My shot was not on and I was not really confident in shooting it, but in the second half (Coach Chancellor) told me ‘You are All-SEC, you have to play like it.’ My teammates were right there, and every time I missed they said to shoot it again. I just credit them and I just have to keep fighting through it. If it wasn’t for them my confidence probably wouldn’t be so high right now.”

On Sunday’s Pack the PMAC game against Louisiana Tech …
“The history of the rivalry with LSU and Louisiana Tech, it is an in-state rivalry.  I think the loss to Tulane is a bad taste in our mouth with another in-state team, so we know that they want to beat us pretty bad, especially with how the game ended last year. We are not taking this team lightly, they have a great group of girls and they are a tough matchup for us. We have been preparing for them, we are going to keep preparing tomorrow and Saturday at practice and come prepared to play. We are ready.”

On her offense helping the team start to find a rhythm on offense in the second half …
“Coach always tells us to be ready for when our opportunity comes. I felt like that was the time of my opportunity, and I came through and helped my team.”

On the early start being different …
“It was just like us having a practice, because our practice is very intense. It was nothing different to us.”