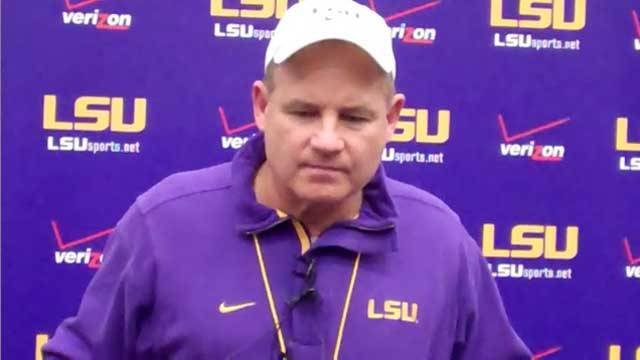 BATON ROUGE – LSU wasted little time in getting the intensity up at bowl practice as the Tigers practiced in full pads on Wednesday for just over two hours in what was their first workout geared to preparing for Texas A&M.

LSU will face the Aggies in the 75th AT&T Cotton Bowl on Friday, Jan. 7 at Cowboys Stadium in Arlington, Texas.  It will be the 50th meeting between the teams, but the first since a 33-17 Texas A&M victory in 1995. LSU goes into the Cotton Bowl with a 10-2 overall mark, while the Aggies are 9-3 after winning six straight games to close out their regular season.

The Tigers will practice again on Thursday afternoon, take Friday off and then practice for the third time this week on Saturday. LSU will practice three times next week before breaking for Christmas.

“These first three practices are designed to get the speed of the game back,” LSU coach Les Miles said after Wednesday’s workout. “We are going to go more LSU versus LSU than we are going against Texas A&M.

“It was probably a pretty good first practice considering the number of practices we’ll have in this bowl season, but it’s just not fast enough and not good enough. Our guys understand that, and it’s part of the process. It’s the first one, but we were just a little bit too sloppy for our liking.”

The Tigers closed out Wednesday’s session with a pair of 10-minute periods that allowed the younger plays and opportunity to get practice reps.

“We finished with a young guy’s go,” Miles said. “We took a 10-minute period and did individual drills and took another 10-minute period and ran our plays. If we can get an extra 100 plays in during a bowl season for our young guys, that prepares them for the spring, and it’s a nice start to spring practice.”

Against the Aggies, the Tigers will face a team that finished the regular season on a roll, beating teams such as Nebraska, Oklahoma, Texas, Texas Tech and Baylor on its way to sharing the Big 12 South crown with Oklahoma State and Oklahoma.

“Texas A&M is a very talented football team,” Miles said. “I’ve watched every game that they’ve played and I don’t see any weaknesses. They execute, and they do the right things. It’s really a very quality football team with a nice running attack and a quarterback who is mobile and can make all of the throws.

“Defensively, they have playmakers all over the field. They are very strong at linebacker and safety and they have a good front. They have a very good scheme. This is going to be two very talented teams playing nose to nose for four quarters to decide victory. I can’t imagine it won’t be a great game.”

On moving into bowl preparation…
“We are looking forward to it. Texas A&M is a quality opponent. We’ve finished the season with a loss, not the way we really wanted to do it, but I think we’ll be motivated for this game toward the end of the year. Coach Miles always does a great job of getting us prepared for the bowl games and things of that nature. Having two or three weeks to prepare for the game, I think we’re going to be ready to go once we hit the ground in Dallas.”

On the primetime game slot…
“I hate to say it, but I don’t think it gets any bigger than Saturday night in Tiger Stadium. I think we are used to it. I don’t think it will be a shock to us. We’re just playing in a new place for us. To be able to go down there and play in Cowboy Stadium is going to be big. I think that will be enough motivation for this whole team to actually play on a pro field because that’s everybody’s dream as a kid, to be able to play for the pros. I guess we get to play a little bit and sample getting out there on Sunday what it will feel like a little bit.”

On if he is considering forgoing his senior year for the NFL…
“Everybody thinks about it. I can’t say I don’t, but I really haven’t made a decision on that yet. I’m just focusing on this last game. We have to finish this season with a win, so that is really my main focus right now, not what could be. I just focus on taking it day-to-day, one day at a time.”

On receiving all of his awards and honors …
“It was special, that was my whole goal coming into college. I can say that I set each and every goal that I set for myself, and it is just a blessing to be named in those categories.  I think there were a few things I think I could have done better, but I am always hard on myself. It was fun receiving those awards.”

On having a trophy case like Glen Dorsey’s …
“It is special. When I first came here he was leaving, and (the trophies) weren’t (in the case) yet. I first saw them going into my sophomore season, and I thought ‘Wow, that is cool. I want to get some of those in the trophy case before I leave.’ I have some now.”