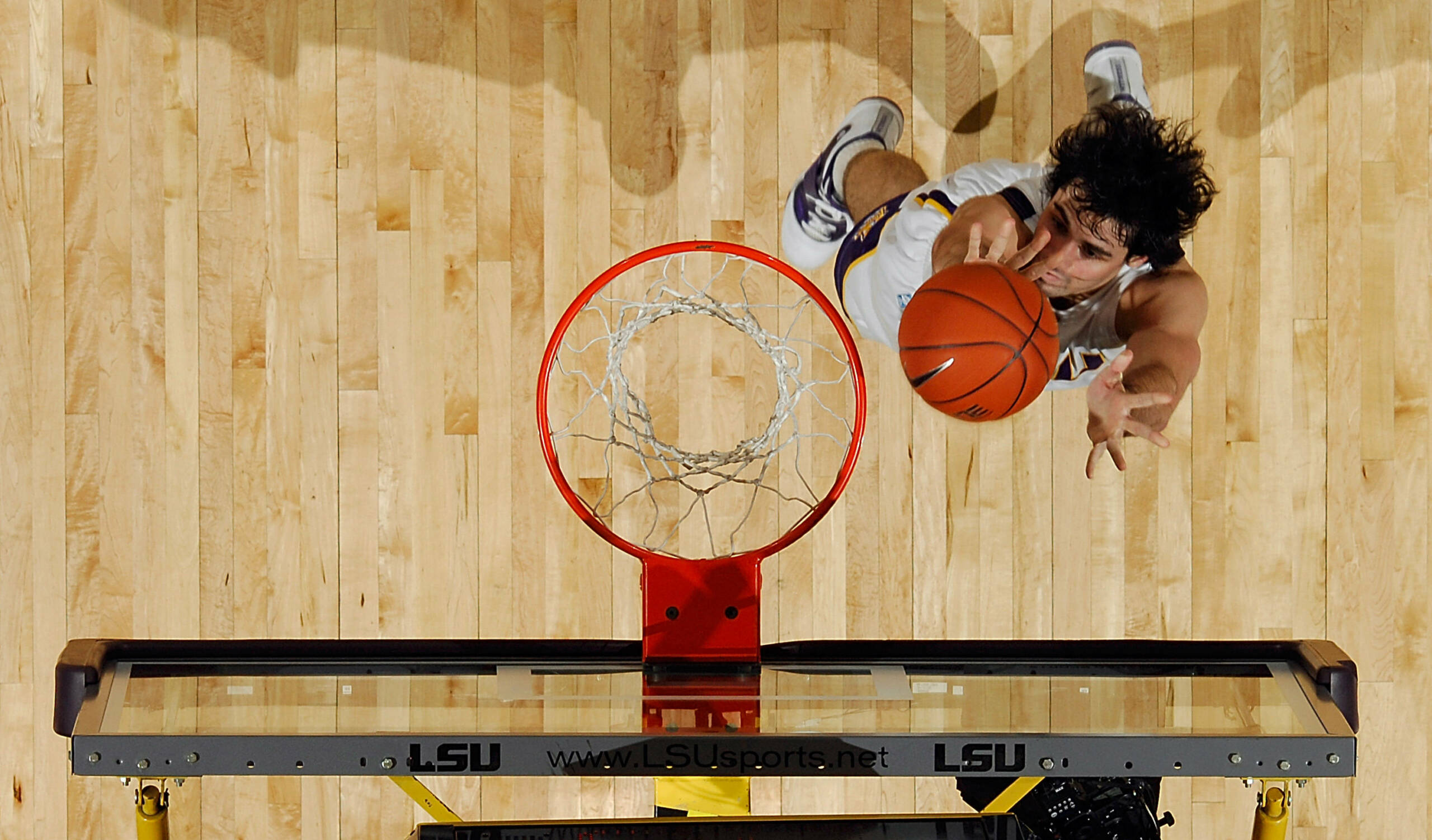 BATON ROUGE – Chad Gray drilled consecutive three-pointers over a 36-second span during overtime en route to a game-high 22 points to lift Coastal Carolina to a 78-69 decision over the LSU men’s basketball team Monday at the Maravich Center.

Gray also added seven rebounds, two blocks and a steal as the Chanticleers (8-2) reeled off a 14-5 advantage in the extra period to claim their sixth straight victory. LSU (6-3) had its four-game winning streak dating back to Nov. 24 come to a close.

Coastal Carolina connected on 27-of-60 from the floor for a 45 percent ratio, the highest LSU has allowed since dropping a 71-60 affair to Memphis on Nov. 21. After shooting a scorching 14-for-25 in the first half, the Tigers cooled off to a 10-for-32 clip in the second half.

Andre Stringer poured in a team-high 16 points and has reached double figures in eight of nine games this season. He also handed out five assists and tallied two steals.

Stringer was joined by Ralston Turner with 15 points and six rebounds. LSU also received nine points apiece from Aaron Dotson and Garrett Green. The nine points for Green on 4-of-6 shooting was a career-high as he saw extended minutes due to Malcolm White‘s foul trouble.

Gray’s back-to-back threes stretched a 68-66 edge into an eight-point spread with 2:06 remaining. After an Andre Stringer three-ball brought LSU back within 74-69, the Tigers couldn’t draw any closer after two empty possessions. Coastal Carolina regrouped behind four straight free throws during the 33 seconds to secure the 78-69 win.

Desmond Holloway tacked on 18 points, while Mike Holmes added a double-double with 14 points and 10 rebounds for Coastal Carolina.

LSU fought back from a 50-41 deficit with 11:22 left in regulation. Turner and Stringer ignited the comeback with three-pointers to pull the Tigers back to 52-48 at the 8:55 mark. LSU continued to chip away and evened the tally at 58-58 on a White free throw with 3:03 on the clock.

The Chanticleers surged back ahead 64-60 with 53 seconds to go on a pair of Gray free throws. Five seconds later, Turner brought LSU back within a possession with two free throws of his own.

Then, Turner forced a steal on the defensive end, which turned into a Storm Warren bucket in transition for the equalizer with eight seconds on the clock. Warren garnered eight points and five rebounds.

LSU raced out to a 15-6 lead in the game’s opening minutes as the Tigers fired in six of their first nine shots before Stringer, Turner, Warren and White were saddled with two fouls. Coastal Carolina used seven points from Anthony Raffa to trim the margin to 35-30 at the break.

LSU continues a four-game stretch in eight days Thursday as McNeese State visits the Maravich Center. Tip-off is slated for 7 p.m. and the game will be televised by Cox Sports Television.

Opening statement…
“It was 45-35 off the glass, we gave up 16 offensive rebounds, and obviously if you don’t shoot the ball, and we’ve been shooting the ball pretty well, it’s going to be tough to beat anybody, so that was pretty much the game right there. We got off to a good start. I thought our execution was pretty good. We were doing a decent job defensively. Then, right before the half we had a breakdown defensively. We probably should have been up eight, and then, in the first five minutes of the second half we struggled. They did a good job of execution and taking advantage of our unforced turnovers and at times, our bad shot selection. It is what it is.”

On if he was confident LSU would play well in overtime considering how the Tigers fought back…
“There were no tired legs. There were no tired shots. I just felt confident that if we execute and we do the things that we do in practice, then we have a chance to get good shots, and we have a chance to win our share of games. Therein lies the problem. We didn’t execute coming out of a couple of timeouts. There were a couple of situations where there was a five-second count on Aaron (Dotson). One of the things we talked about a lot and tell them a lot in timeouts is you have a full (timeout), you have a 30, you have a two, and if anything, on the end line call a timeout. On the half-court or the full-court in certain situations like that, take the five count.  Like I said, the bottom line for us is it is real simple but it’s hard to do; we’ve been very inconsistent in our ability to block out and rebound the ball, and just the unforced silly turnovers have really hurt us. It hurt us against Central Michigan, but we were lucky. I don’t fault their effort, but we have to get to the point where we got to execute. We have to be consistent for us to be the kind of team we want to be. That’s what I mean when I talk about when you win, you’re playing with fool’s gold. Well, fool’s gold smacked you in the face tonight.”

On Coastal Carolina pulling away at the end of the game…
“It was very disappointing. It was a competitive game. We shouldn’t have let it get to that point and we should have taken care of business from the get-go. A couple of things didn’t go our way and they ended up pulling away from us.”

On team’s frustration…
“Obviously, we don’t ever want to lose. We take our losses hard. All of our guys love winning, so every loss is disappointing whether we are on a streak or not.”

On foul trouble…
“We had foul trouble early. I know that I had two early. We’re still a young team. I have issues with fouls, and I have to get myself into the gym and work on keeping my hands off.”

On Coastal Carolina pulling away at the end of the game…
“We had a lead and we needed to do a better job of executing it early. We had some breakdowns, we got beat on the glass and that allowed them back into the game. Down the stretch, they made some crucial baskets. We came up short.”

“It’s still early in the season. There are a lot of things out of this game. We got beat defensively and on the glass. Those are things that are necessary to win. It’s still early. We do have time to correct it, but at the same it is going to have to be corrected fast. We don’t have forever. We need to take imitative on ourselves to get it corrected.”

On physical nature of the game…
“They were very well prepared. They had 11 days off to prepare for us and they were calling out our plays. We just came out and didn’t run our offense. At the end of the game they just came out on top.”

On Coach Trent Johnson‘s message after the game…
“As a team, we were all down on ourselves and we can’t let that get at us. We need to come out tomorrow, keep on working at getting offensive and defensive rebounds, and on boxing out. That really killed us tonight.”

On the win …
“I am very pleased for our team. I am very excited for them. It is a signature win for us, and our players are very excited right now. I told them I wanted them to savor this because it is a special moment. At the same time, it is early and there are a lot of games that have to be played and we need to focus on not getting too high just as you focus on not getting too low. This is one that will make our players feel good. I am just very pleased with our entire team. It took a lot of grit and determination to pull this off. They controlled the game early and we came back and got control, but then we let it slip away and get into overtime. It kind of reminded me of the Charlotte game that went into overtime, even though in that game we had to come back to send it to overtime. We were able to go to overtime tonight, and a team can easily fold in that situation as momentum changes, but we didn’t. We actually ended up winning the game by nine points, surprisingly. I thought our changing defenses kept them at bay, and we had some big plays by a lot of people. Chad Gray made some big shots, and Mike Holmes was tired as he had not played in over a year, but was able to play 24 minutes and score 14 points and get 10 rebounds. Those guys came back to an SEC environment where they have been. This is a special moment for them because this is a chance to come back and show people who they are and they certainly made a statement tonight. I thought Desmond Holloway played well. Danny Nieman ran the team in the second half and Anthony Raffa came in and gave us his usual gutty performance. Brandon Crawford came off the bench and gave us some good minutes. Sam McLaurin got seven rebounds in 20 minutes of play. The thing that is impressive is that they were bigger and stronger – a typical SEC team – and we outrebounded them 45-35. That is the thing that stands out in this game. I thought our defense was good and we hit our foul shots, but outrebounding this team says a lot about our basketball team and why we won here tonight.”