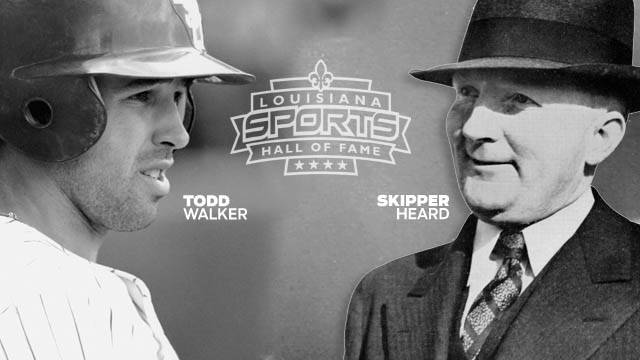 NATCHITOCHES – Former LSU baseball star Todd Walker and innovative former athletic director Thomas P. “Skipper” Heard are among the inductees of the 2011 class of the Louisiana Sports Hall of Fame announced Saturday night in an exclusive broadcast announcement of the class on “CST Tonight!” on Cox Sports Television.

They will be officially enshrined Saturday, June 25, 2011 in Natchitoches to culminate the June 23-25 Louisiana Sports Hall of Fame Induction Celebration. Heard, who died in 1980, will be honored posthumously.

The 2011 inductions will be conducted in the shadow of construction of the Louisiana Sports Hall of Fame museum, operated by the Louisiana State Museum system in a partnership with the Louisiana Sports Writers Association. The steel beam framework of the two-story, 27,500-square foot structure is up facing Cane River Lake in the National Historic Landmark District of Natchitoches. The museum could be ready for its grand opening as early as the June 2012 Hall of Fame Induction Celebration.

The eight new inductees will raise the total of Hall of Fame members to 285 men and women honored since the first induction class  – baseball’s Mel Ott, world champion boxer Tony Canzoneri and LSU football great Gaynell Tinsley – were enshrined in 1959 after their election a year earlier.

A complete membership list and biographical information on all 277 current members is available at the www.lasportshall.com website.

The 2011 Induction Celebration will kick off Thursday evening, June 23 with the La Capitol press conference and reception. It includes three receptions, a Friday afternoon celebrity pro-am golf scramble at Oak Wing Golf Course in Alexandria, and a Saturday morning youth sports clinic hosted on the Northwestern State University campus. Tickets for the induction ceremonies and dinner, and golf entries, will go on sale in April through the www.lasportshall.com website, said Hall of Fame chairman Doug Ireland.

Also to be honored at the event will be the winner of the 2011 Dave Dixon Louisiana Sports Leadership Award and the recipient of the 2011 Distinguished Service Award in Sports Journalism presented by the LSWA. Those award recipients will be announced in the spring.

Walker, a member of the LSU Athletic Hall of Fame (2006) and College Baseball Hall of Fame (2009), was named to the 28-person College World Series Legends Team announced in May 2010. An All-Southeastern Conference infielder at LSU from 1992-94, Walker ranks as one of the greatest hitters in SEC history. The Bossier City native became the league’s all-time leader in hits (310), runs (234), RBI (246) and total bases (557).

A first team All-American in 1993 and 1994, he earned CWS MVP honors while helping LSU to its second national title in 1993 after being named SEC Player of the Year that spring. Going into the 2011 season, he still ranks first in school history in batting average (.396) and triples (15), second in total bases, third in hits and RBI, and fourth in home runs (52), runs and doubles (61).

Heard was LSU’s second athletic director, serving from 1933-54, and his innovations included creating “Saturday Night In Tiger Stadium” and spearheading expansive radio coverage of LSU football and two Tiger Stadium expansions, one installing 1,500 dorm rooms. He was AD when LSU became a charter SEC member in 1933.

Heard, then in the position of graduate manager of athletics, pushed Saturday night football in part to solve scheduling problems and conflicts with Tulane and Loyola. It also allowed the refinery workers in Baton Rouge time to get off their shifts and get to the stadium in time for an 8 p.m. kickoff. Legendary sports writer and author, and Louisiana Sports Hall of Fame member Peter Finney wrote Heard “might well be considered the father of the tremendous sports plant on today’s Baton Rouge campus.”

Known for his accuracy and game-winning kicks after joining the team as a fourth-round draft pick in 1982, he made 40 field goals of 50 yards or more for New Orleans.  He scored a club record 121 points in 1987 when they reached the NFL postseason for the first time ever and after parting ways with the Saints in 1995 went on to play 12 more years with four teams, making 25 of 28 field goals at the age of 47 with Atlanta in 2007.

Johnson was part of the Saints’ famed “Dome Patrol” four-man All-Pro linebacking corps in the late 1980s and early 1990s. A sturdy 6-foot-3, 235-pounder who was a four-time Pro Bowl pick from 1989-92, Johnson was a feared inside linebacker and perhaps the hardest hitter alongside Louisiana Sports Hall of Fame members Rickey Jackson, Sam Mills and Pat Swilling. In 1991, he, Mills and Swilling became the first set of three linebackers from the same team to start the all-star contest; one year later they were joined by Jackson to become the first club with four linebackers in the Pro Bowl game.

Johnson became a starter in 1987 — the first year the Saints made the playoffs — and collected more than 100 tackles three times (including a career-high 114 in 1988) while starting 98 of the 120 games he played with the team. He also had 12 sacks, four interceptions, 11 forced fumbles and five fumble recoveries in his NFL career.

After a stellar four-year career at McNeese State, Jordan was Louisiana’s all-time rushing king with 4,106 yards when he left the school and now ranks third statewide behind Kevin Faulk and Mewelde Moore. Jordan, a prep star in Iota, was a four-year All-Southland Conference pick for the Cowboys who played nine pro seasons – including seven with the Saints (1986-92).

A fullback during his Saints career, Jordan helped the team win 69 games as the Saints posted their first winning season and first playoff appearance (1987), along with their first division title (1991). He rushed for 687 yards on 184 career attempts and scored six touchdowns while blocking for Rueben Mayes and Dalton Hilliard, two of the team’s top all-time rushers. Jordan also played in the USFL in 1984-85 and in 1984, he was the league’s fourth-leading rusher (behind Joe Cribbs, Kelvin Bryant and Herschel Walker) with 1,276 yards and eight TDs, while catching 45 passes for 427 yards and four TDs.

Watts was an NAIA All-American at Xavier of New Orleans and a first-team NBA All-Defensive selection. A 6-foot-1, 175-pound guard, Watts averaged 18.3 points and 3.5 assists per game during a three-season career at Xavier from 1970-73, earning All-America honors as a junior and helping the Gold Rush post back-to-back 20-win seasons for the first time since the late 1930s.

An undrafted free agent who played six NBA seasons, he led the league in assists, assists per game, steals and steals per game in his third season with the Seattle SuperSonics (1975-76) en route to making the All-Defensive team. He was the first of only four players ever to lead the NBA in assists per game and steals per game in the same season. averaged 8.9 points and 6.1 assists in 437 career NBA games and ranks eighth in NBA history with 2.2 steals per game for his career with the SuperSonics, the New Orleans Jazz and Houston before retiring in 1979 because of injuries.

Watts is credited by NBA.com as the “first NBA player to turn a bald head into a fashion statement.” In 1975-76, he was the second winner of the NBA’s J. Walter Kennedy Citizenship Award for exemplary community service.

When he arrived at West Monroe in 1989, the Rebels regularly finished last in their district, going 3-6 in 1988. Shows built one of Louisiana’s greatest prep football powerhouses complete with remarkable facilities and sellout crowds.  West Monroe’s program, with two mythical national championships to go with 17 district titles, was the focus of an ESPN season-long reality show in 2008.

Hall, a three-time All-American — twice a first-team selection — was a record-setting pitcher for Louisiana-Lafayette and led the Ragin’ Cajuns to their first Women’s College World Series in 1993. Former ULL and current LSU coach Yvette Girouard, the winningest coach in state history and already in the National Fast-Pitch Softball Coaches Hall of Fame, called her a “pioneer” in state softball.

The Cajuns had a combined 155-24 record in her final three years, and she had a win over top-ranked Arizona in the 1993 WCWS in leading the Cajuns to a third-place national finish. More than half of her career wins (56 of 104) were shutouts, and she holds school records for no-hitters (17) and perfect games (five). She is now the successful head coach at the University of Houston.

Six LSU baseball players appear in the 2022 Perfect Game list of Top 100 College Sophomores, as the Tigers lead the nation with the most prospects in the Top 100 ranking.
Skip To Main Content