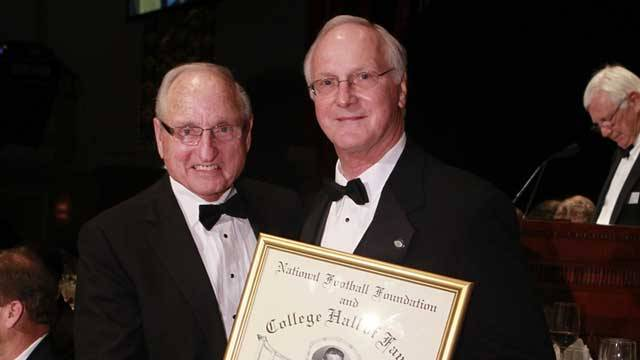 NEW YORK – Stating at a press conference Tuesday that “no one looking at that 6-1 skinny young man” in his first uniform could have envisioned his future, Jerry Stovall began the day that would culminate in his induction into the National Football Foundation and College Hall of Fame later in the evening at the Waldorf-Astoria.

The Class of 2010 met briefly with the media Tuesday morning leading to the banquet that would induct the 1962 Heisman Trophy runner-up to become the 12th player or coach from LSU to make the college Hall. His enshrinement ceremonies at the site of the College Hall of Fame are set for July 15-16 in South Bend, Ind.

Stovall was All-SEC as a junior in 1961 and in 1962 as a senior. He finished second to Oregon State’s Terry Baker in the Heisman Trophy race. Stovall rushed for 1,071 yards and caught 462 yards in passes, with seven interceptions a defensive player and punted for an average of 42.1 yards. He was the second pick in the 1963 NFL draft, playing nine seasons with the St. Louis Cardinals.

He then was an assistant coach and later head coach for four seasons at LSU.

“When I was 12 years old I had my first uniform and played on my first organized team. I promise you no one looking at that 6’1″, skinny young man would have envisioned today,” said Stovall. “I am flattered and I’m honored and I’m humbled by all the coaches that I played with and the tremendous fans of this great sport. This is a tremendous honor for me and my family and our university. I’ll be eternally grateful to LSU and the administration to allow me the privilege to be a part of this class.”

The 69-year-old Stovall is a native of West Monroe who currently serves as the CEO of Baton Rouge Area Sports Foundation, a position he has held since 1994.