December?s Student-Athletes of the Month 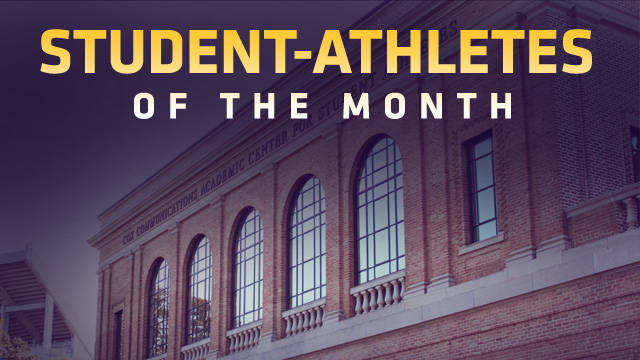 BATON ROUGE – The Cox Communications Academic Center for Student-Athletes honored six LSU student-athletes for their academic achievements and community service for the month of December.

Humanities of social science are Nevis and Sheppard majors. Duvall is a biochemistry major, while Nola is majoring in sports administration. Human nutrition is Stower’s major and pre business is Ernst’s major.

Nola, a junior infielder from Baton Rouge, is currently leading all student-athletes in community service honors for the school year. His November projects included Thanksgiving with the Tigers, Big Buddy’s Day of Mentor, serving food at the Bishop Ott Shelter and carving turkeys at St. Vincent de Paul. On the field, Nola batted .320 with 16 doubles, two triples, five homers, 50 runs and 52 RBI during the 2010 campaign. Nola, an All-SEC Second-Team selection at shortstop, committed only 10 errors in 306 chances and represented LSU at the 2010 USA Baseball Collegiate National team trials over the summer.

A freshman gymnast from Gretna, Duvall was a member of the 2009 LHSAA Division I Team championship. Competing as a level 10 gymnast, Duvall captured the floor title at the 2010 New Orleans Jazz Invite along with the beam title at the 2009 Judges Holiday Classic.

Ernst, a freshman golfer from Seneca, S.C., put together a pair of strong efforts during the fall season.

She earned a 10th place at the Tar Heel Invite and was LSU’s top golfer at the SEC/Pac-10 Challenge. The Tigers enter the spring season with a No. 4 national ranking.

A senior defensive tackle from Marrero, Nevis was an All-SEC First-Team performer by both the Associated Press and SEC Coaches. A four-time recipient of the SEC Defensive Lineman of the Week award, Nevis  paces the squad with 13 tackles for loss, six sacks and three forced fumbles  to go along with 54 tackles.

Sheppard, a senior linebacker from Stone Mountain, Ga., joined Nevis as an All-SEC First-Team selection by both the Associated Press and SEC Coaches. He’s racked up a team-best 108 tackles and has eclipsed the century mark in each of the last two seasons. Sheppard also has notched 11 tackles for loss and tallied four sacks.

A freshman from Pendleton, S.C., Stowers is an extremely decorated hurdler and ranked No. 1 for the Class of 2010. She is a two-time USA Today All-USA Track & Field Team pick and two-time champion of the 100-meter hurdles at the Nike Outdoor Nationals.