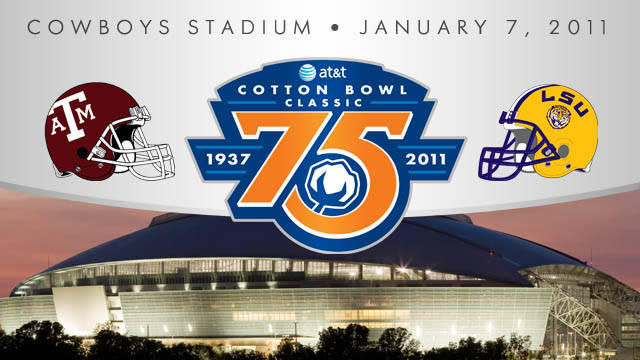 BATON ROUGE – LSU will renew its longstanding football rivalry with Texas A&M on Jan. 7 in Dallas as the Tigers will face the Aggies in the 75th-annual AT&T Cotton Bowl, officials from the bowl announced on Sunday night.

Kickoff for the 75th annual AT&T Cotton Bowl Classic is scheduled for 7 p.m. on Friday, Jan. 7, 2011 from Cowboys Stadium in Arlington, Texas. The game will be televised to a national audience on FOX.

The Cotton Bowl appearance will be the fifth for the Tigers and the first since the 2002 season.

“This was one of those years where everything really fell into place,” Bain said. “LSU formally accepted our invitation today, and the Tigers took all the remaining tickets to make the 75th Classic a hard sellout. I can’t wait to see the atmosphere at Cowboys Stadium in primetime on January 7th.”

“We formally announced Texas A&M last week and the phone lines started to light up like a Christmas tree,” Rick Baker, President of the AT&T Cotton Bowl Classic said. “With the announcement of LSU and the game now being a sellout, I couldn’t imagine a better way to celebrate 75 years.”

“Our Team Selection Committee looked at all the scenarios involving multiple teams from both conferences,” Fin Ewing, Team Selection Chairman of the AT&T Cotton Bowl Classic said. “In the end, the consensus was that a Texas A&M vs. LSU matchup would create one of the best matchups among all the bowl games. Not many bowls can say they have a matchup of old rivals that dates back over 100 years.

“We are very excited about going to Dallas for the AT&T Cotton Bowl Classic,” LSU Director of Athletics and Vice Chancellor Joe Alleva said. “Once it looked like we were out of the running for a BCS bowl game, we turned our attention to Dallas and getting into the Cotton Bowl. This is the bowl that our players and coaches wanted to play in. Dallas is a great city with a strong LSU following and to play in the 75th anniversary of the game will be something special.

“We have sold every ticket that we’ve been given so I know that our fans are excited about renewing our rivalry with Texas A&M in one of the great bowl games in college football.”

LSU coach Les Miles will be taking his second team to the Cotton Bowl as he brought his 2003 Oklahoma State squad to the Classic in Dallas.

“The Cotton Bowl is one of the all-time great college bowl games and to be able to participate in what is the 75th anniversary of this legendary game will be special for our team,” Miles said. “I’ve been here before as a head coach so I know firsthand what a first-class bowl this is. The hospitality is second to none and the atmosphere is no different than if you were playing in the national championship game.

“I’m excited and I know that our players are excited about this opportunity. Texas A&M has an outstanding program and we are looking forward to renewing our longstanding rivalry with them.”

LSU, ranked No. 11 in the latest AP Top 25 and No 12 in the USA Today Coaches’ poll, brings a 10-2 overall mark into the game as the Tigers have reached double-figure victories for the 10th time in school history. LSU will be making its school-record 11th straight appearance in a bowl game, a streak that dates back to the 2000 Peach Bowl. LSU is 4-1 in bowl games under Miles, which includes a pair of wins in BCS bowls.

Texas A&M, coached by Mike Sherman, is 9-3 overall and will be after its first bowl victory since a 28-9 win over TCU in the Galleryfurniture.com Bowl in Houston in 2001. The Aggies, who shared the Big 12 South title with Oklahoma State and Oklahoma this year, are ranked No. 17 in the latest USA Today Coaches’ Poll and No. 18 in the AP Top 25. Last year, Georgia posted a 44-20 win over the Aggies in the Independence Bowl in Shreveport.

“First of all, it’s going to be great experience going to Dallas and playing in the largest stadium in America. We get to renew a rivalry with a great Texas A&M team. I watched them against Texas and they are a great team with a traditional offense but can still run spread and I-formation. This is a big time opportunity for them as well getting to play us.”

“This will be a wonderful setting to showcase our talents in primetime with two really good teams. It’s going to be a lot of fun, especially with our fans coming into ‘Jerry’s World.’ I am looking forward to it, and I can’t wait until we get down there after New Year’s. I want our fans to come out too. It will be a blast for them.”

“Playing in the Cotton Bowl in Cowboys Stadium is going to be an awesome experience. Any time you play a team outside your conference, especially a team the caliber of Texas A&M gets you fired up. They come from a competitive conference in the Big 12 and I’m sure they will pack the place with their fans nearby. I hope our fans can grab up some tickets too. It’s going to be a special experience playing in a stadium that size. We get to play two games in a row there and open up the season next year there (against Oregon). I think that will be huge. We can soak in the atmosphere and remember what it’s like when we head there next year.”