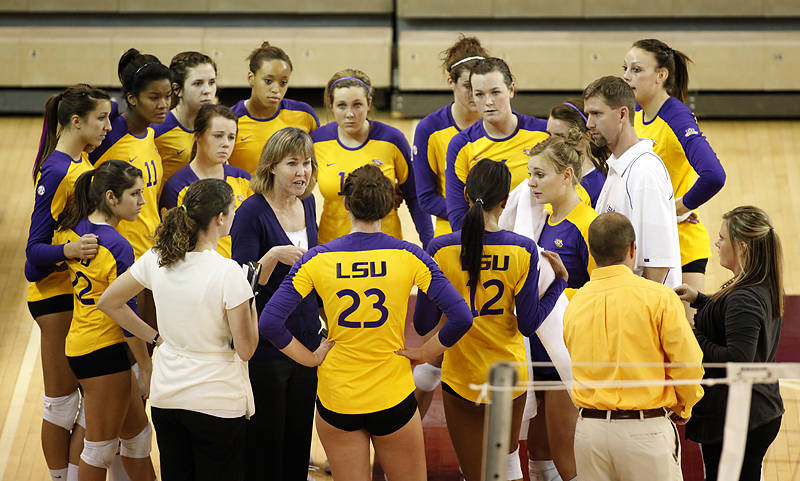 LSU (25-5) was making its sixth straight NCAA appearance, while Tulsa (31-2) extended the nation’s longest streak to 30 matches. The Golden Hurricane square off with either Oklahoma or Wichita State for an opportunity to advance to the Sweet 16.

“We had a great season, but the wrong ending for this group,” head coach Fran Flory said. “They played hard, but Tulsa is a very talented team. We knew Tyler Henderson was the real deal, and she certainly showed that tonight. Tonight doesn’t diminish what this team accomplished this season. At this time last year, no one could have dreamt we would be in this position.”

Desiree Elliott, the SEC Freshman of the Year, smacked nine kills on a .364 hitting percentage and added five blocks to pace the Tigers. Michele Williams knocked eight kills followed by Madie Jones with six kills. However, the duo was held in check to a combined .064 ratio.

On the back row, Lauren Waclawczyk reeled in 10 digs for her 17th consecutive double digit dig performance. Meghan Mannari and Sam Delahoussaye tacked on six and five digs, respectively.

Brittney Johnson handed out 26 assists to go along with six digs and four blocks, while Angela Bensend finished with five kills and six digs. At the net, Tania Schatow tacked on three blocks. It was the final match in Bensend, Johnson and Schatow’s careers.

“Those three players have left their mark with four SEC West championships, an overall SEC title and in the NCAA’s every year,” Flory said. “We can’t ask for much more. All three are going to graduate on time and know where they’re going. It’s just the end of their playing career in the Purple and Gold.”

The first set was a back-and-forth affair that featured 16 ties and six lead changes. Down 15-13, LSU reeled of seven of the next 11 points. During the spurt, the Tigers received two Jones kill and a Williams spike. An Elliott ace put LSU ahead 20-19, but Tulsa ran off six straight points fueled by a quartet of Henderson spikes to take a 25-20 victory.

Henderson, the Conference USA Player of the Year, continued her strong play and posted another nine-kill frame in set two.  The Golden Hurricane used a 17-5 finishing kick to turn an early 10-8 hole into a 25-15 win. Diana Silva powered home six of her nine kills during the second set.

“We stopped Henderson early, but she took it to another level,” Flory said. “We hadn’t seen that level on film; we made her adjust what she was already good at. Unfortunately, our defense didn’t answer the call as we knew we had to. Our blocking was good, and we channeled the ball into our defenders. We had a tough time reading them and being able to make good touches. Our defense didn’t match theirs. That was the difference in the match.”

Out of the locker room, Elliott cranked four quick kills coupled with a pair of Williams spikes to push LSU to a 11-8 edge to start the third set. Tulsa regrouped with five straight points out of a timeout to gain a 13-11 lead. Kelsey Hancock connected for four of her nine kills during the frame as the Golden Hurricane secured the sweep with a 25-18 triumph.

“Desiree played very well, but we couldn’t create enough swings for her,” Flory said. “She showed some great leadership as a freshmen and certainly proud of her. The bottom line is we weren’t able to find our consistent offensive rhythm and get our transition game. That’s our bread and butter. Our transition game is what creates for us, and we weren’t able to sustain any momentum.”

The six-time defending SEC Western Division champions are scheduled to return 11 letterwinners, including four starters for the 2011 season.