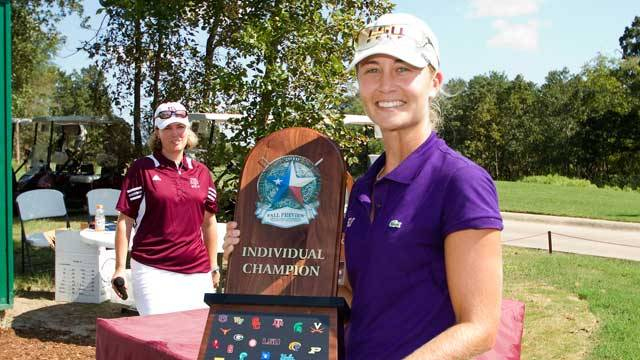 BATON ROUGE – The performance of the LSU women’s golf team in the fall has been recognized by two major golf publications in their review of the fall season.

Much of the attention is focused on All-America senior Megan McChrystal who finished the fall as the top-ranked player in the GolfWeek/Sagarin rankings. In fact, Golfweek called McChrystal’s emergence as the third-best story of the women’s fall golf season.

GolfWeek’s Julie Williams wrote:  “The last anybody heard of Megan McChrystal at the conclusion of the 2009-10 golf season, she had put up a final-round, 8-under 64 at the Country Club of Landfall in Wilmington, N.C., to set a school, course and NCAA Championship scoring record. After a quiet summer that included more summer school than tournament action, McChrystal burst onto the scene at the beginning of the fall with a win at the NCAA Fall Preview.

“The LSU senior finished out the season with a T-4 at the Mason Rudolph and a runner-up finish at the Tar Heel and will take the top ranking in the Golfweek/Sagarin into the spring.”

Golf Digest College Insider Ryan Herrington dubbed McChrystal the women’s player of the (mid) year: “The way the 22-year-old from Stuart, Fla., finished her junior year at LSU last May, shooting a record 64 in the final round of the NCAA Championship, foreshadowed what she has done this fall. Still, with final-day scores of 65, 68 and 66 in three starts, McChrystal’s closing-round 66.3 average was lower than even she could have predicted, helping her claim victory at the NCAA Fall Preview, a T-4 finish at the Mason Rudolph and second (lost in a playoff) at the Tar Heel Invitational.”

LSU coach Karen Bahnsen credits McChrystal’s concentrated work on her short game for a 68.89 overall average. “I wish it was as easy as she makes it look,” Bahnsen said. “She’s a real competitor. I’m just glad to have her see some results from all the hard work because the girl has worked her tail off.”

Speaking of Bahnsen, Herrington named her Coach of the (mid) year writing: “She was inducted into the NGCA Hall of Fame in December 2008, an achievement that might have been accompanied by some looking in the review mirror rather at her accomplishments. Instead, Bahnsen has been stepping on the accelerator, her team winning the Mason Rudolph Collegiate this fall and finishing second at the NCAA Fall Preview and the Tar Heel. Her 2010-11 squad has more depth than any group she has had in Baton Rouge in recent memory, plus it has the go-to player in Megan McChrystal that helps win championships. For Bahnsen, keeping her players focused shouldn’t be a problem considering conference rival Alabama isn’t going to go away anytime soon. If she can get them to find the proverbial extra gear, she will have a good shot at making her 27th season with the Tigers her best yet.”

In calling LSU the surprise team of the year so far, Herrington said this of the Lady Tigers: “In the fall of 2009 the Tigers won the season-opening Hooters Collegiate Match Play title, and had many like me wondering if it was a fluke or a sign of things to come. Thanks to illness, injuries and other assorted reasons, the answer turned out to be the former, as the team managed just one other top-five finish the rest of the season.

“Fast forward, then, to this fall and a one-stroke loss to Alabama at the NCAA Fall Preview followed by a two-stroke win at the Mason Rudolph. Once again the same question surfaced regarding the ladies from the bayou? Is LSU for real this time?”

The difference between this year’s squad and last year’s? LSU coach Karen Bahnsen says it’s a simple one. “It’s depth,” she notes. “I have six players in the lineup that can go low. You’ll see some teams with three or four. I have a legitimate six.”

LSU will open its spring season as the No. 4 team in the country, playing its first tournament on Feb. 21 in Parrish, Fla., at the Central District Challenge. The team then is in Louisiana for two events, the Sugar Bowl Intercollegiate hosted by Tulane at English Turn Feb. 27-March 1 and then the return of the LSU Golf Classic at the newly-renovated University Club March 11-13.

The spring season concludes April 1-3 at the Liz Murphey Invitational in Athens, Ga., April 1-3. The SEC Championships are scheduled for Auburn April 15-17.