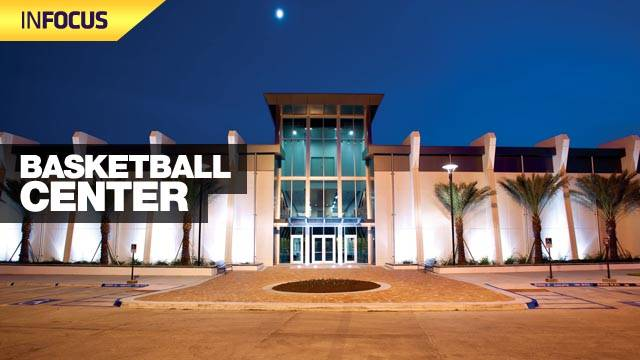 Take a step inside LSU’s new state-of-the-art basketball practice facility, and one will quickly see why LSU players, coaches and administrators are beaming with excitement.

While paying tribute to LSU’s illustrious past, the opening of the complex begins new eras for the men’s and women’s basketball programs. In a time where facilities are vitally important to the success of collegiate programs, LSU now has a basketball facility that rivals any school in the country.

“This building gives our coaches the opportunity to acquire the talent that we need to win and compete for championships,” said Vice Chancellor and Director of Athletics Joe Alleva. “That is what we are all about here – striving for excellence and competing for championships.”

Formerly the Director of Athletics at Duke University, Alleva especially grasps the value of the new complex.

“The facility is tremendously important for us to compete,” he said. “What this building symbolizes to me is excellence and the striving for excellence.”

LSU coach Trent Johnson, while not one to get too caught up in the glitz and glamour of the facility, also recognizes that the complex will provide a tremendous boost to the Men’s Basketball program.

“I am not a guy that is really caught up in the facilities,” said Johnson, “but this helps, obviously this helps.”

With a team that is already one of the best in the country, women’s basketball coach Van Chancellor appreciates the significance the building will play for the future of his program.

“Sincerely it is a great day for us. This is so valuable to our whole basketball team, and for all of you who have made this possible, thank you,” Chancellor told the crowd at the ribbon-cutting ceremony.

While it is easy to get caught up in the glamorous aesthetics of the complex, the new structure goes far beyond simply looking nice. With each basketball team having its own practice court now, the teams will be able to practice when they choose. Before, the teams had to coordinate practice schedules, sometimes limiting the amount of practice each team received.

The new complex is all about basketball, though.

As the basketball programs look forward to a bright future, Johnson wants to be sure to honor the outstanding past.

“Our responsibility and my responsibility is to make sure that in some way, shape or form, whether it is by putting their picture on the wall or with the graphics, that every former basketball player that has been involved with the men’s program, there is a place for him here,” Johnson said. “Every guy that has ever worn this jersey, I want him to be acknowledged in some way, shape or form in this practice facility.”

So as the programs pay tribute to their renowned histories, LSU Basketball turns toward the future. With coaches in place and facilities completed, get ready for the new eras of LSU Men’s and Women’s Basketball. Eras that are sure to produce many wins and likely a championship or two.