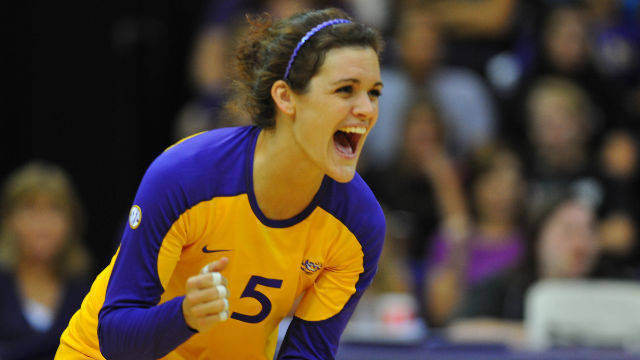 BIRMINGHAM, Ala. – One day after making program history with its 13-0 start, Angela Bensend and Desiree Elliott of the No. 16 LSU volleyball team secured SEC weekly awards Monday as announced by the league office.

Bensend notched SEC Defensive Player of the Week accolades, while Elliott earned her second consecutive SEC Freshman of the Week honors. LSU (13-0, 4-0 SEC) is one of five remaining undefeated teams in the nation.

“We’re extremely proud of Angela and Desiree for receiving these awards,” head coach Fran Flory said. “Both players have executed at a high level in all facets of the game and been vital pieces to our success. At the same time, they would be the first to tell you that their teammates are the ones that allow them to gain these accolades. Angela has been an excellent floor leader for our group, while Desiree continues to grow with each match she plays in.”

Bensend’s defensive effort rivaled her offensive output as she reeled in 3.67 digs and added 1.00 blocks per set. The Plano, Texas, native corralled 16 digs and added 16 kills en route to her fourth double-double of the season versus Mississippi State. Bensend also racked up a 97 percent serve-receive passer rating and equaled a season-best four blocks at Alabama.

Elliott was a key component of LSU’s road sweeps over Alabama and Mississippi State. Playing only front row, Elliott contributed 2.33 kills and 0.83 blocks per set. She hammered 10 kills, one away from a career-best, on a career-high .588 hitting percentage against Mississippi State. The Cypress, Texas, native has posted a .458 hitting clip in league matches to pace the SEC.

LSU heads into the second leg of its four-match road swing Friday at No. 2 Florida. First serve against the Gators is scheduled for 6 p.m. CT. Live stats for Friday’s match is available on LSUsports.net, while fans also can follow live in-match updates on the team’s official blog at http://lsuvolleyball.posterous.com.