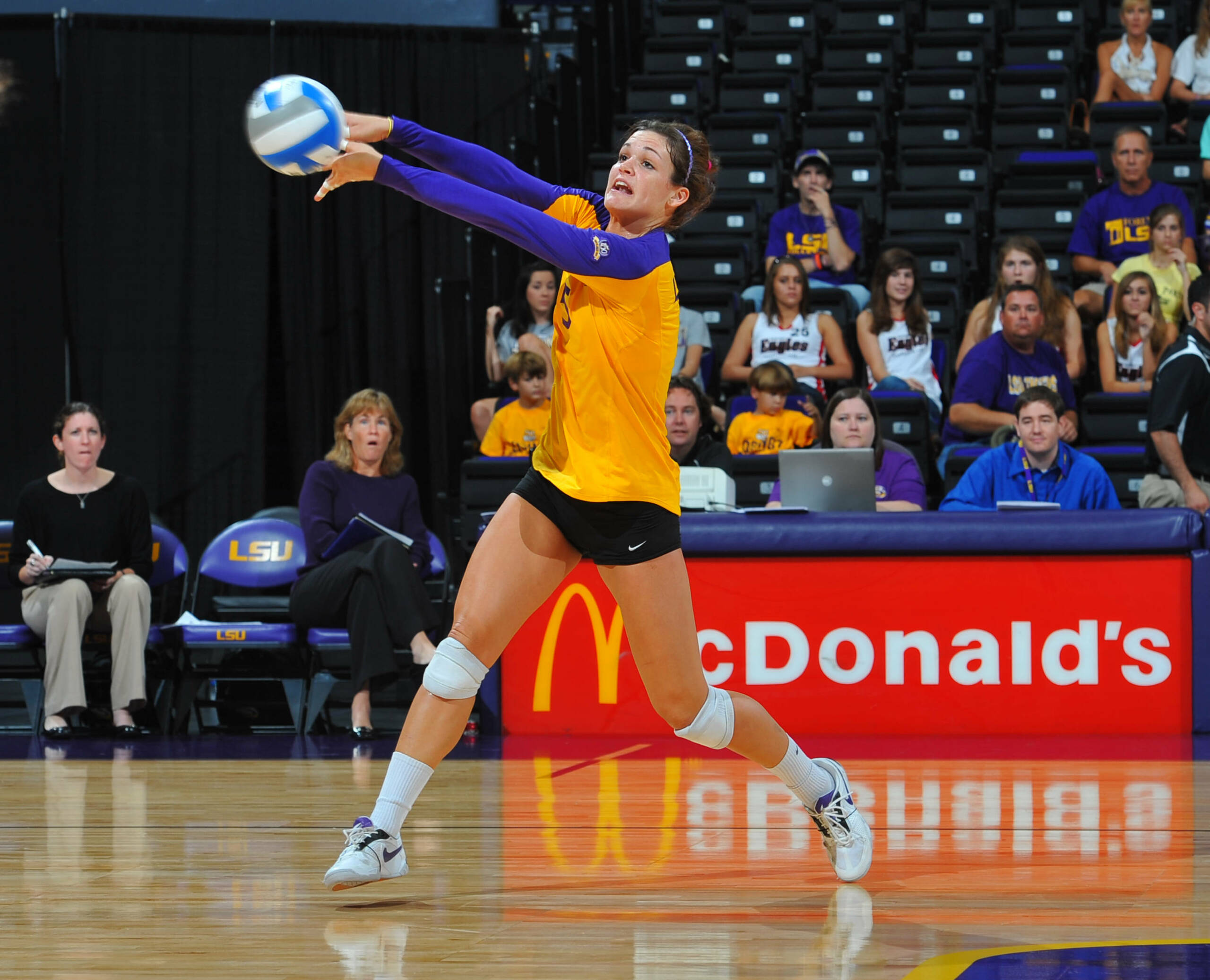 Angela Bensend, OH, Sr., Plano, Texas
Bensend put together an impressive SEC opening act as LSU improved to 11-0 on the season to remain the SEC’s lone undefeated team. Bensend, the SEC kills per set leader, took her game to a new level. She hammered home 5.14 kills per set and reeled in 3.71 digs per frame. She equaled a career-high 22 kills highlighted by eight spikes in the fourth set to go along with 18 digs against Auburn. Bensend registered five or more kills in five of her seven sets over the weekend.

Angela Bensend, OH, Sr., Plano, Texas
Bensend’s defensive effort rivaled her offensive output as LSU picked up sweeps at Alabama and Mississippi State as the Tigers eclipsed the 12-0 start set by the 1991 team. She secured 3.67 digs per set and added 1.00 blocks per set making the most of playing all six rotations. Bensend garnered 16 digs as part of her fourth double-double of the season against Mississippi State, who was unbeaten at home entering the match. The Plano, Texas, native also recorded a 97 percent serve-receive rating for the weekend and matched a season-high four blocks at Alabama.

Desiree Elliott, MB, Fr., Cypress, Texas
Elliott, the reigning SEC Freshman of the Week, was a key contributor to LSU’s road sweeps over Alabama and Mississippi State as the Tigers set a new program mark with a 13-0 start. Playing only front row, Elliott bettered her numbers from a week ago with 2.33 kills per set and ripped kills on over 50 percent of her swings. She powered home 10 kills, one shy of her career-high, on a career-best .588 hitting percentage against Mississippi State. The Cypress, Texas, native also recorded 0.83 blocks per frame as LSU limited its opponents to a .196 hitting percentage for the weekend to remain one of only five undefeated teams in the nation.

Notes on the Tigers
LSU made program history and notched its fifth straight undefeated weekend to secure the program’s first 13-0 start, eclipsing the 12-0 mark set by the 1991 team during the Tigers second consecutive Final Four run. The Tigers also moved up one spot to No. 16 in the latest edition of the AVCA Top 25 poll and are one of only five remaining undefeated teams in the nation after handing Alabama and Mississippi State their first home losses of 2010. Overall, LSU continues to rank among the SEC’s Top 2 in six of the seven major categories, including occupying the league’s top spot in kills per set [14.70], assists per set [13.72], hitting percentage [.288] and opponent hitting percentage [.148]. Angela Bensend and Brittney Johnson are the SEC leaders with 4.56 kills per set and 10.98 assists per set, respectively. Bensend has strung together 10 or more kills in 11 of her 13 matches, including seven straight dating back to September 10. She connected for five or more kills in four of her six frames over the weekend. Johnson has fueled LSU’s offense to a .338 hitting clip during SEC matches highlighted by three consecutive over .300 performances. Her .343 hitting ratio also is sixth in the SEC. Michele Williams checks in among the SEC’s Top 10 in three different categories, including hitting percentage [.362 – 4th], kills per set [3.33 – 7th] and blocks per set [1.00 – 9th]. Madie Jones and Desiree Elliott have opened conference play with a vengeance. Elliott has powered home a league-best .458 hitting clip, while Jones has popped 3.23 kills per frame on a .367 hitting ratio, both among the SEC’s Top 10 in conference matches. LSU’s back row has maintained its persistent, high execution play sparked by Lauren Waclawczyk, Sam Delahoussaye and Meghan Mannari. The group has been a major part of the Tigers, producing a 73 percent sideout efficiency [194-267] in addition to a 97 percent serve-receive rating [227-233] during conference action. Waclawczyk has reeled in double figure digs in 10 of 13 matches and her 4.14 digs per set are fifth-best in the SEC. Waclawczyk and Delahoussaye likewise come in at sixth and ninth in aces per set. LSU wraps up a four-match road swing against No. 2 Florida [6 p.m. CT, Friday] and South Carolina [12:30 p.m. CT, Sunday].