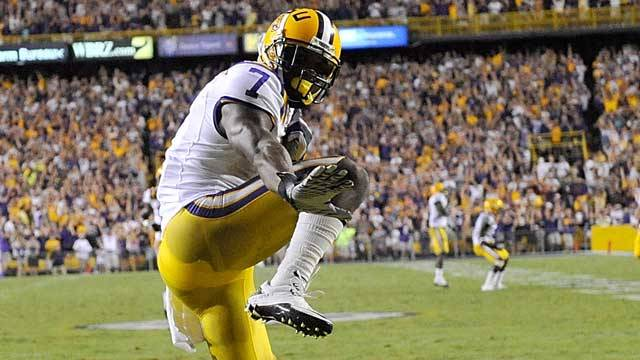 BATON ROUGE — A 60-yard punt return for a touchdown by LSU cornerback Patrick Peterson gave the 15th-ranked LSU football team a 17-point lead, while the Tigers defense allowed only 157 yards in a 20-14 win over No. 22 West Virginia on Saturday Night in Tiger Stadium.

LSU’s defensive unit was the Tigers’ most potent offense, as the Tigers had two takeaways that setup 10 points, blocked a 28-yard field goal, had four tackles behind the line of scrimmage and spent most of the game harassing Mountaineers freshman quarterback Gene Smith.

“I was just in the locker room with an undefeated, 4-0 college football team,” LSU head coach Les Miles said. “I think there are a lot of teams that would like to be in that position. We just played our second nationally-ranked team and won. Our football team is playing great on defense.”

The Tigers improved to 4-0 overall and next face Tennessee on Oct. 2 in Tiger Stadium. The matchup with kickoff at 2:30 p.m. CT on CBS.

“We can run the football well,” Miles said. “We didn’t throw it as well as we would have liked. Our quarterback play has got to get better. It’s just that simple. Our guys know it. We are going to work on it. We’ll start yet again on Monday.”

LSU running back Stevan Ridley proved the biggest offensive weapon in the game, outgaining his teammates with 20 carries for 116 yards and a 1-yard touchdown. The rest of the Tigers combined for 114 yards.

LSU starting quarterback Jordan Jefferson was 10-of-22 passing for 75 yards and was interceptioned twice. Backup Jarrett Lee entered for one series in the fourth quarter and completed his only pass for five yards.

“We needed a change right there,” Miles said. “We put in Lee. Lee came in, he made a pass, and he did some things we wanted him to do, and then, we wanted to run the clock out, and we felt better with Jefferson running the clock out. That’s why we put him back in.”

The Tigers were penalized 12 times for 120 yards, including 30 on West Virginia’s opening drive in the third quarter that cut the Tigers lead to 17-14.

Smith finished the half 14-of-29 passing for 119 yards with two touchdown passes on consecutive drives sandwiching halftime.

Smith’s lone interception was caught by LSU cornerback Tyrann Mathieu, who also picked up a fumble recovery in the first quarter. Mathieu’s takeaways accounted for 10 points.

Peterson showed his prowess before the Tigers offense touched the ball, returning a punt 26 yards into West Virginia territory to start LSU’s first drive. He wasn’t tackled until he reached the redzone, but it was ruled that he stepped on the sideline at the WVU 37.

LSU was unable to capitalize offensively, as a pass from Jefferson was tipped by Toliver and intercepted by cornerback Keith Tandy at the West Virginia 15.

The Mountaineers began a 67-yard that included 30 yards on two LSU personal fouls. LSU stiffened inside the redzone and forced a 28-yard field goal attempt which was blocked by  Levingston and rolled harmlessly in the endzone for a touchback.

After an 18-yard completion to Ridley, three more penalties on the LSU offense stymied the ensuing drive and Derek Helton was called upon for a 55-yard punt.

West Virginia started from its 12-yard line when Jock Sanders elected to field the punt at the 5 and was smothered by Ron Brooks and Alfred Blue.

On third-and-10, Mountaineers fullback Ryan Clarke was separated from the ball by LSU defensive tackle Drake Nevis. Mathieu picked up the ball inside the 10-yard line.

LSU was able to convert the turnover into a touchdown, as Ridley scored on a 1-yard touchdown with 27 seconds left in the first quarter.

Mathieu then intercepted Smith on third-and-2 at the WVU 41, as LSU linebacker Barkevious Mingo pressured the quarterback and Mathieu cut in front of the intended receiver for his first interception as a Tiger.

After a three-and-out by West Virginia, Peterson fielded the punt with four defenders bearing down. Slicing between them and zigzagging through waving Mountaineers, he outran defenders and scored from 60 yards in front of the LSU student section in the North endzone. Then, he struck the Heisman pose on national television, drawing a personal foul.

Peterson became the first Tiger with multiple punt return touchdowns in one season since Skyler Green in 2003.

The penalty on Peterson allowed West Virginia to start the next drive with a short field, as Jasper’s kick from the 15-yard line was returned to the WVU 47. A 19-yard pass to Sanders moved the Mountaineers into LSU territory at the 34. Smith converted a fourth-and-1 at the LSU 9 before connecting with Stedman Bailey for a 5-yard touchdown on third down with 48 seconds left.

LSU took a 17-7 lead into the lockerroom.

The Tigers took the opening possession of the second half, with West Virginia kicking away from Peterson. Ridley picked up a quick first down at the West Virginia 49, but a holding penalty again put the Tigers in poor down and distance. On third-and-15, Jefferson’s pass was intercepted by Eain Smith and returned to the LSU 15 where he slipped to the turf.

After a 15-yard penalty for unsportsmanlike conduct, West Virginia needed only two plays to get within three points of LSU. Smith completed a 13-yard catch and run to Sanders, and LSU’s lead was trimmed to 17-14 with 12:22 left in the third quarter.

LSU responded with a 14-play, 72-yard drive that resulted in a 23-yard field goal by Jasper. LSU had first-and-goal from the 10 but wasn’t able to take a shot at the endzone.

Trailing by six with 3:57 remaining, West Virginia took over after fielding a Helton punt at its 9-yard line. In the shadow of his endzone, Smith wasn’t able to stand the Tigers’ pressure and wasn’t able to pickup a first down.

A 35-yard punt from the West Virginia endzone was fielded by Rueben Randle at the WVU 42.