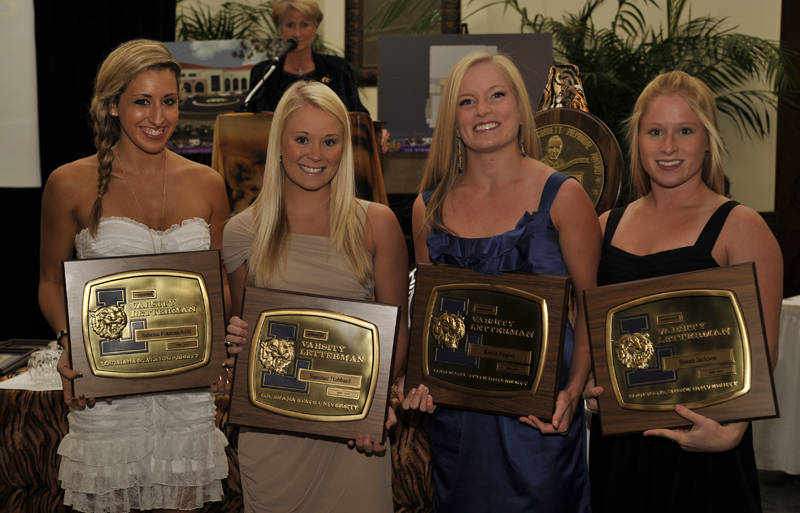 BATON ROUGE – The LSU gymnastics team celebrated the accomplishments of the 2010 season Friday night at the annual team banquet held at the LSU Faculty Club.

Head coach D-D Breaux and her staff honored the team by presenting letter awards, SEC certificates, national awards and team awards, and the coaches recognized the 2010 senior class for all the accolades they racked up during their careers.

“The reception is a great opportunity in the fall for us to honor our team and graduating seniors for all the team and individual accomplishments from the prior season,” Breaux said. “It’s so fitting to honor this senior class because this one is particularly special because of what they accomplished in their careers and how they added to the tradition of our program.”

Sonny Gilbert, the husband of the late DeeDee Gilbert, presented the senior class of Sabrina Franceschelli, Summer Hubbard, Susan Jackson and Kayla Rogers with the DeeDee Fulmer Gilbert Award that is given annually to the gymnasts who consistently demonstrate a strong commitment to academic and athletic excellence.

Daniel Nunes, Marketing Coordinator for gymnastics, served as master of ceremonies for the event, and Joe Alleva, Vice Chancellor and Director of Athletics, gave an introduction at the event.

The event concluded with a highlight video from the 2010 season that was prepared by Tate Guillotte, a student member of the LSU football video staff.

LSU will continue preparation for the 2011 season when the Tigers resume fall practice Monday.