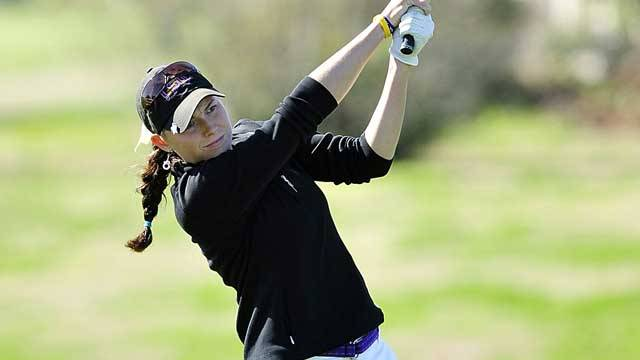 FRANKLIN, Tenn. – The new motto for the LSU women’s golf team may now be “Under Par and Loving It.”

Not only did the under par string of rounds for the Lady Tigers reached a program-best four straight, but for the second straight round they broke the school single round record, firing a 10-under par 278 to take the first round lead of a low-scoring Mason Rudolph Women’s Championship Friday at the Vanderbilt Legends Club.

On the heels of firing eight-under 280 in the final round of the NCAA Fall Preview, the Lady Tigers played the final three holes in six under par to reach double digits at 10-under to set the school mark lower. They needed every shot of it to get the opening day lead of the 54-hole tournament as defending national champion Purdue is just one shot back at nine-under par 279.

LSU’s second place finish in the Preview put them No. 2 in the country in the initial Golfstat performance rankings that came out on Thursday.

The round was a perfect example of team golf as LSU’s low counting score was an even par 72 by Jacqueline Hedwall. But the junior’s scores proved pivotal as she birdied the 16th and 17th holes to get back to even par, setting the tone for the play over the final three holes.

Junior Tessa Teachman led LSU with a five-under par 67 to stand in a tie for second in the individual competition, two shots behind Wake Forest’s Michelle Shin at seven-under par 65. The Baton Rouge native had six birdies on her card to just one bogey and brought one one-under plays also on the 16th and 17th holes.

Sophomore Mary Michael Maggio continued her solid play with a three-under round of 69. Maggio birdied three of the first seven holes and had pars the rest of the way to stand in a tie for 10th at the end of the opening round.

Junior Megan McChrystal, a winner in the Fall Preview, also played steady, making all pars until a bogey at the ninth hole. But birdies at the 14th, 17th and 18th holes brought her back to two-under par 70 for the day and a tie for 17th place.

“We really played a steady round of golf and then those last few holes we tore it up,” said LSU Head Coach Karen Bahnsen of the round. “We finished strong and that was a key that we wanted to try to finish the rounds stronger. It was really windy, but the girls kept within themselves and didn’t let that fluster them. The scores overall were very good with the wind. I was very pleased for Jacqueline (Hedwall) with the way she finished. That was mentally big for her. Everyone kept their focus and it continues to show what this team can do.”

LSU will be paired with Purdue and California in the second round on Saturday which begins at 8 a.m. CDT. The Lady Tigers wave will go off hole No. 1 beginning at 9:30. Live scoring can be found at LSUsports.net through Golfstat.com.