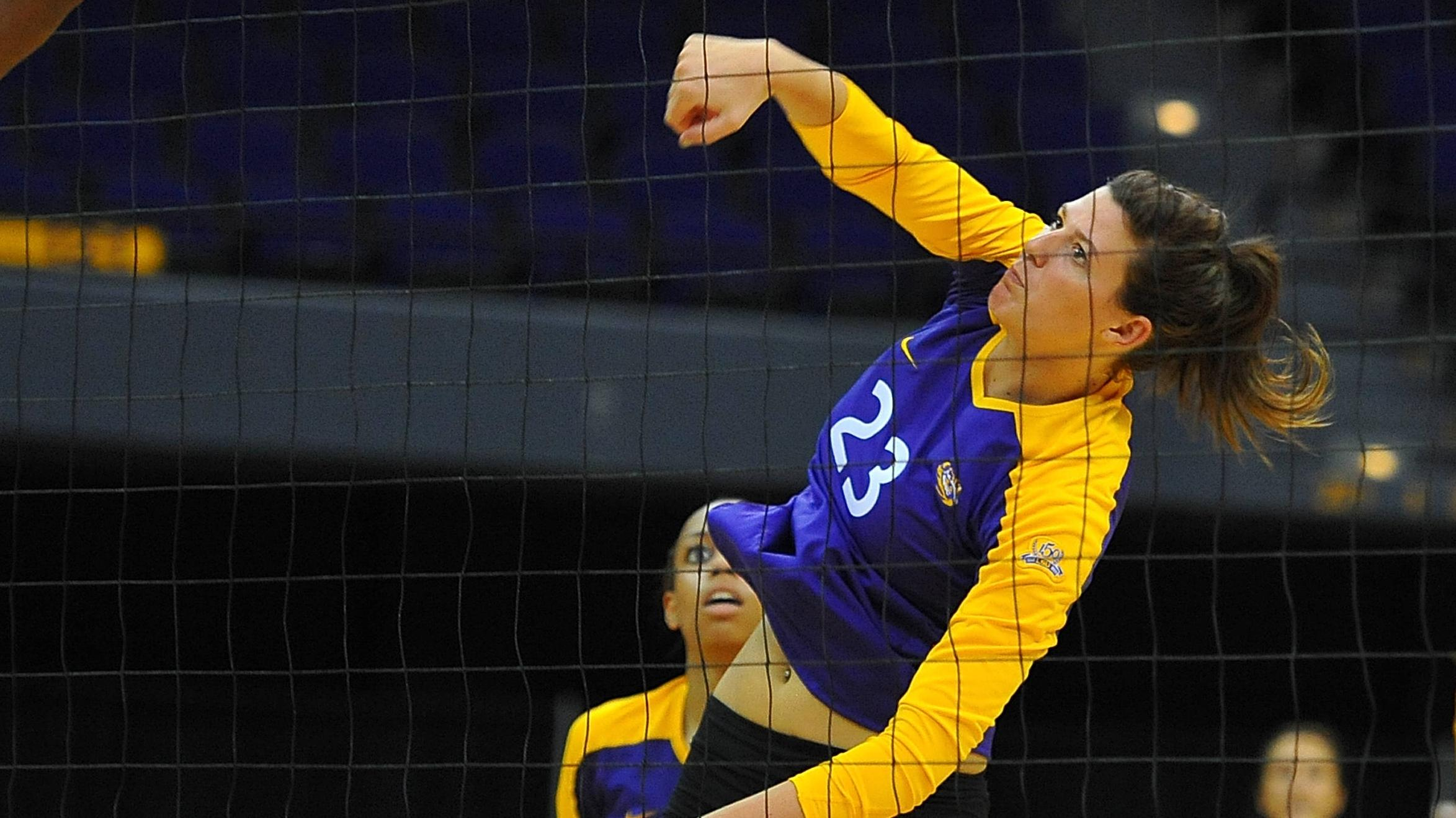 TUSCALOOSA, Ala. – Brittney Johnson handed out a match-best 40 assists and fueled the No. 17 LSU volleyball team to a scorching .393 hitting percentage en route to a proficient 3-0 sweep over Alabama [25-20, 25-22, 25-22] Friday at the Coleman Auxiliary Volleyball Extension  to open its SEC road slate.

“This was not a normal match for us in terms of our getting into our rhythm,” head coach Fran Flory said. “I can’t say enough about the poise, confidence and composure that our team showed to stay the course. We made every important touch. I’m proud of our hitters for taking care of the ball and finding a way to score when it counted most.”

Johnson also scooped up 10 digs to compile her fifth double-double of the season as LSU (12-0, 3-0 SEC) moved to 12-0 to equal the 1991 team for the best start in program history. The Tigers also compiled their eighth straight win over Alabama (8-4, 0-2 SEC) and pushed their winning streak to 32 matches over SEC Western Division foes, both streaks date back to the 2006 season.

“It’s always important to win on the road,” Johnson said. “We didn’t have one go-to person; it makes my job easier when we have multiple options. I trust that they’re going to take care of it when I put up a hittable ball.”

Michele Williams tallied 13 kills on 23 swings for a .435 clip, while Madie Jones chipped in 11 kills on 21 swings on a .429 ratio. The Tigers also received four kills each from Desiree Elliott and Tania Schatow.

LSU registered a dynamic 75 percent sideout efficiency for the match highlighted by an 82 percent ratio in the third set. The Tigers have tallied a 70 percent mark or better during all 10 of their SEC sets.

“We’ve been working really hard on siding out in practice,” Bensend said. “Everything is getting put into place, and we’re playing really well with each other.”

After six early ties and a pair of lead changes, LSU took control of the first set and reeled off 10 of the next 15 points to turn a 7-6 deficit into a 17-11 advantage to force Alabama to burn both of their timeouts. Williams cranked three kills and Schatow added two spikes to aid the spurt. The Crimson Tide got back within three points on a trio of occasions, the latest at 23-20, before a Bensend kill coupled with a Jones-Williams block gave the Tigers the 25-20 win.

At 14-14, LSU put together a 6-2 run to pull away in set two. Johnson set the perimeter to Bensend and Jones, who provided two kills each. Down the stretch, the Tigers converted on 5-of-6 sideouts capped by Bensend and Williams kills to secure the 25-22 victory.

Both offenses turned up the intensity and powered home over a .300 hitting clip during the third set. Behind 15-13, LSU seized momentum with five quick points as Williams knocked two kills and Waclawczyk fired in an ace. The Crimson Tide charged back to 23-22 and with LSU out of substitutions, Jones dug out a pair of critical balls that led to Bensend spikes for the 25-22 triumph.

“Madie was the hero of the night for me,” Flory said. “She had a great offensive night, but the digs she made at the end of the third set were extensions we haven’t seen from Madie do before. That’s a huge step for us, and I’m really proud of her.”

LSU continues its four-match road swing Sunday against Mississippi State with first serve slated for a 1:30 p.m. start at the Newell-Grissom Building.

Live stats are available on LSUsports.net, while fans also can follow live in-match updates on the team’s official blog at http://lsuvolleyball.posterous.com.