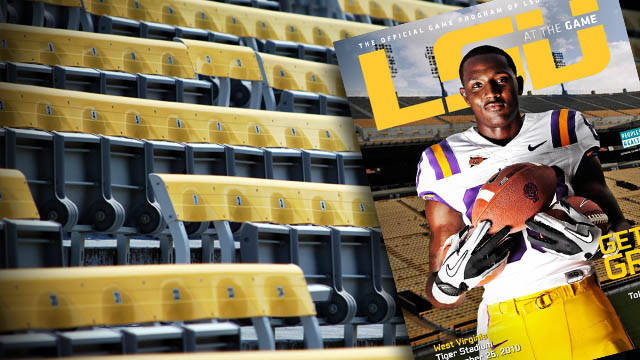 BATON ROUGE – Two of college football’s winningest programs over the last five years will meet for the first time as 12th-ranked LSU hosts 21st-ranked West Virginia in one of the nation’s top non-conference games on Saturday.

Kickoff for the Tigers and the Mountaineers is slated for 8:10 p.m. in a sold out Tiger Stadium. The game will be televised on ESPN2 and can also be seen on the internet on www.ESPN3.com with Ron Franklin and Ed Cunningham calling the action for the national telecast. The game can also be heard on the LSU Sports Radio Network as well as in the Geaux Zone on www.LSUsports.net/live with Jim Hawthorne and Doug Moreau on the call.

LSU and West Virginia, both 3-0 overall this year, have each won 54 games dating back to the start of the 2005 season ranking them among the top 10 nationally for victories over that span.

“We are excited about getting back in Tiger Stadium and playing in front of a sellout crowd on national television,” LSU coach Les Miles said. “West Virginia is a quality football team that will present a challenge for us in all three phases of the game.

“We’ve had a good week of preparation. I think our team understands that we are going to have to come ready to play for 60 minutes.”

Against West Virginia, the Tigers will face perhaps one of the nation’s top all-around running backs in senior Noel Devine. Devine, who has rushed for over 3,500 yards in his career, leads the Mountaineers with 354 rushing yards and two TDs and he’s third on the team with 13 receptions.

Quarterback Geno Smith, who will be making just his fourth career start, has tossed for 800 yards and seven touchdowns this year.

“There offense is a little different,” Miles said. “It’s their version of the spread and it is a very good one. It is one they have been in for quite some time and have a very good understanding of. It is going to require good defense and for us to tackle well and be around the ball.

“I think it is going to be a great matchup. Certainly it is more than just Noel Devine, it is a very quality West Virginia offense, but when the ball is handed to him it will be a bunch of fast guys going after it.”

The Tigers will counter the West Virginia offense with a defense that is allowing only 11.3 points and 80.3 rushing yards per game. LSU has not allowed any first quarter points this year and the Tigers haven’t given up a first quarter touchdown during the regular season since the Mississippi State last season.

Linebacker Kelvin Sheppard paces the Tiger defense with 27 tackles, while Drake Nevis has been named the SEC Defensive Lineman of the Week two straight weeks. Nevis has 3.5 sacks, 5.0 tackles for losses, one interception and 18 total tackles to his credit.

Offensively, the Tigers will face a defensive scheme the features three down linemen and five linebackers.

“Honestly there is a different challenge to it,” Miles said of the West Virginia defensive alignment. “We are not unaccustomed to it, we just don’t see it. You can have some familiarity with it, but you just don’t play it with any regularity. So even though it is old learning for the coach it is new learning for the players. It requires a focus to get it right, and I think our guys are working hard toward that.”

With its defensive scheme, West Virginia has a tendency to crowd the line of scrimmage presenting opportunities in the passing game.

Quarterback Jordan Jefferson, now 12-5 as a starter including a 6-1 record in games played in Tiger Stadium, has thrown for 344 yards and two TDs to go with 68 rushing yards and a score. Jefferson connected on 10-of-16 passes last week and ran for a  TD in the win over Mississippi State as he continues to look to regain his early season form from 2009.

Junior Stevan Ridley leads the Tigers and ranks third in the conference with 318 yards and two TDs, while Russell Shepard is second on the team with 128 rushing yards and a pair of scores. Shepard has also caught six passes for 58 yards and a touchdown.

The Tigers will get the services of tight end Deangelo Peterson back on Saturday after he missed the first three games of the season with a foot injury.

Post-Game Traffic
The traffic issues have been reviewed following last week’s home opener and adjustments have been made to correct problems with southbound traffic on Nicholson and Burbank.

Parking on Campus
The LSU Athletic Department reminds fans that reserved parking spaces are for vehicles only. The purchase and use of a parking pass for other reasons, such as port-o-lets, tents, chairs, etc., is not permitted.  In addition, for your safety and for the courtesy of other drivers, we ask fans not to tailgate in travel lanes.  This prevents other fans from parking in valid parking spaces which cause further traffic congestion on game day.

The 13th Gate
LSU football fans driving to the game are also reminded that the 13th Gate Haunted House, located on St. Phillip Street in downtown Baton Rouge, will be open this weekend and could cause delays when heading northbound on Nicholson Drive.

Live Sports Radios
If you purchased a Tiger Live Sports Radio last year, you can have it re-programmed to receive the live broadcast of LSU football games during the 2010 season. Simply bring your Live Sports Radio to one of the LSR kiosks located in and around Tiger Stadium on game day for the free frequency updated. The LSR kiosks are located inside Gate 11, entry A and B as well as next to the airplane on the South Lawn of Tiger Stadium. Live Sports Radio is required to obtain an FCC license for every stadium that the team will be playing in throughout the season and the frequencies assigned are different each year. Please visit the FAQ section of www.LiveSportsRadio.com for more information. Please email info@livesportsradio.com or call (877) 577-5711 with any questions or concerns.