by Rachael Edmiston
How They Shot It: Toliver Game Program +0 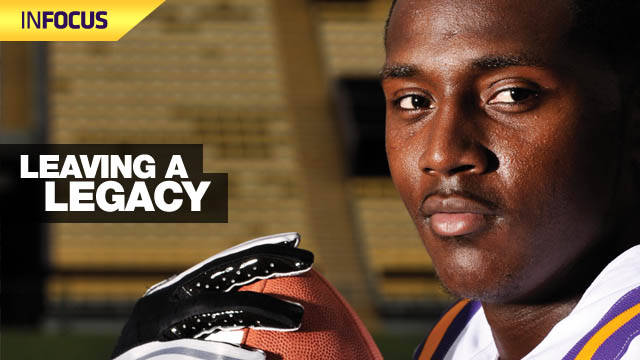 No one athlete has it all. However, if you are LSU wide receiver Terrence Toliver, then you are pretty darn close. The 6-foot-5 inch senior out of Hempstead, Texas is known for his tremendous size, unwavering speed and hot hands, all of which contribute to making him a vital part of the LSU offense and a threat to every opponent.

His knack for toughness and ability to gain yards after the catch make him a standout receiver that is expected to catch the eye of NFL scouts this season. But what sets Toliver apart from other athletes isn’t just his football talent; it’s his dedication to establishing the legacy he’ll leave behind at LSU long after he’s gone.

“I’m trying to do anything I can to help my team win,” Toliver said. “I’m not really focused on any individual honors right now. When the season ends, my contributions to this team will be the legacy I leave behind. I’m going to spend every last minute making my time here count.”

Toliver arrived at LSU as the nation’s top receiver recruit in 2007, but he’s quick to admit that despite his fancy high school football resume, he still had a lot to learn.

“It’s like a whole new ball game,” Toliver said with a smile. “You can be the best receiver the nation has ever seen in high school and still not be anywhere near ready for the level of talent and intensity that runs rampant in the Southeastern Conference. It takes practice, lots of it. And pointers from the coaches and older players, too.”

Toliver received pointers from quite the receiver trio, Brandon LaFell, Early Doucet and Demetrius Byrd – three of the top receivers in LSU history. According to Toliver, all three draftees had a significant impact on his development as a player.

“Those guys were my mentors while they were here,” Toliver said of the three star athletes. “I learned a lot from them, like learning how to run routes, learning how to read coverage and getting acclimated to the college game. I owe them all credit for my athletic progression.”

For the first time in his college career, Toliver entered his senior season in 2010 as the unquestioned No. 1 receiver for the Tiger offense. While the No.1 spot is highly sought after and well respected, it isn’t always glamorous. Because with any responsibility, there is pressure and high expectations, especially from a fan base as passionate as the one at LSU.

“It’s an intense position to be in, but I wouldn’t trade it for anything,” Toliver said. “We have a lot we want to prove this year as a team and anytime you’re the No. 1 option for your position, there’s going to be high expectations. The good news is, I have high expectations for myself and my teammates are counting on me to perform to the best of my ability. Letting the team, the coaches, the fans, and myself down just isn’t an option.”

For Toliver, his talent isn’t the only thing his teammates are counting on this season. As one of only two offensive veterans among a group of talented but inexperienced receivers, Toliver’s role expanded from playmaker to team leader as well.

“Anytime you get the opportunity to lead a group of talented people, it’s a real honor,” Toliver said. “Every one of those guys bring something special to the game, all they need is a little guidance from someone with experience. I want to help all of them reach their full potential, but if I reach at least one, I’ll be proud.”

If direction from someone with actual game-time experience is what the group of young receivers need, then Toliver is just the man for the job. In 40 career games, Toliver has recorded 85 receptions for 1,241 yards and seven TDs. Last season as the Tigers’ No. 2 option behind LaFell, Toliver recorded 53 catches for 735 yards and three scores, numbers that are greater than the rest of LSU’s current receivers’ career numbers combined.

“Toliver had 50-plus catches in the SEC last year, which is huge,” said Shepard. “He probably had the least talked about 53 catches I’ve ever heard of. He’s a great receiver, and everybody respects him.

“He has taught me how to be a complete receiver,” Shepard continued. “He has the most game experience on the team, period. From day one, from top to bottom, he’s played more games than anyone on this roster. He’s taught me how to be poised and how to lead by example, which is something I desperately needed.”

A certain degree of success has followed LSU football in recent years. Since 2007, the Tigers have had five receivers make NFL rosters. But the legacy of the LSU wide receivers isn’t just based on their football success after college. It is a compliment, to say the least, to their athletic performance in college, but it doesn’t stop there. It is also a legacy of excellence, pride, and tradition. It has a value that is impossible to measure or damage. It is a direct representation of what it means to be an LSU Tiger.

Whoever said no one athlete has it all just hasn’t met Terrence Toliver. He is more than just an outstanding wide receiver; he is a leader. When the 2010 LSU football season ends, the stadium lights of Death Valley go out and the field’s green grass begins to fade, the legacy Terrence Toliver leaves behind is sure to live on forever.