In Focus: The Preservation of Tiger Stadium 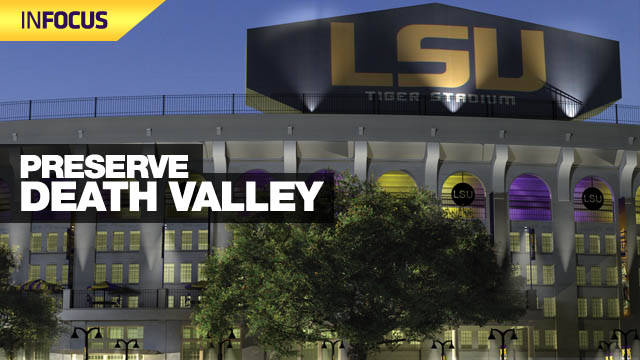 Through the years the outside of this LSU landmark has fallen into disrepair, as many of the dormitory windows that cover the outside of the stadium are cracked, rusted and broken. That is why the Tiger Athletic Foundation started a campaign to preserve Tiger Stadium.

“My first observation about Tiger Stadium when I arrived at LSU was the poor condition of the outside of the stadium, particularly the number of broken windows,” said Joe Alleva, LSU’s Vice Chancellor and Director of Athletics. “So we are launching a campaign to replace every window in the facility, beginning with the north end where thousands of fans gather each Saturday to see the football team and the Tiger Marching Band march down Victory Hill.”

Fans have the opportunity to donate $2000 towards replacing one of the 400 damaged dormitory windows around the stadium.

“We only have one Tiger Stadium. We’re not going to build a new Tiger Stadium. It’s our venue. It’s a great venue for watching football, but we need to take care of it,” Alleva explained.

In recognition of their contribution the donors’ names will be permanently displayed along the outside of the stadium. “We are going to immortalize everyone that makes a donation with a plaque on Tiger Stadium,” Alleva said.

Any extra donations received will be placed in a Tiger Stadium maintenance reserve account for future endeavors in the project.

“We are doing a good thing to preserve Tiger Stadium,” Alleva said, “and you’ll also have your name permanently displayed on the stadium.”

In addition to donations from fans, a special supporter of LSU athletics agreed to match every donation.

Alleva said the windows will not only make the stadium have a more aesthetic appeal, but will also protect its inside from Mother Nature.

“Moisture and mold have been getting into the stadium, so it’s really eating it away from the inside out,” Alleva said.

The North Stadium Drive area outside Death Valley is a popular entrance to campus for students, alumni, faculty and fans. Not only does it serve as an entryway to football games, it is also the path to class for commuting students.

The 1,500 dormitories built around the stadium housed nearly 5,000 LSU students every school year from the early 1930s to the late 1980s. In 1986, dormitories even housed the LSU football team while Broussard Hall, the athletics’ dormitory at the time, was being renovated.

“Tiger fans have grown up there, made friends there, cheered there and cried there.  The memories are endless.  That is why the preservation of the 86-year-old home of the Tigers is so important,” Alleva said.

If you are interested in making a donation or have any questions, please contact the TAF Development Department at 225-578-4823 or visit www.preservedeathvalley.org for more information.