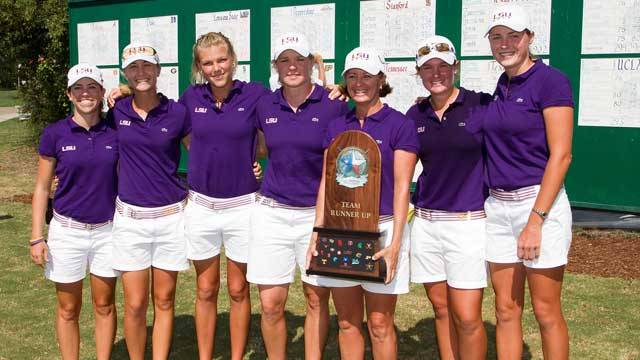 FRANKLIN, Tenn. — The LSU Lady Tigers, off an impressive runnerup finish in the NCAA Fall Preview, will try to continue their early strong play when they start Friday in the Mason Rudolph Championships at the Vanderbilt Traditions Club.

The women in the field will be playing the North course, while a subsequent men’s event takes place on the South course.

After squaring off in a near match-play round on the final day of the Preview, tournament organizers have put LSU and Alabama paired together again for the first round and they will be first off the tee at 8 a.m. on Friday. Also in the opening Wave is the host Commodore team which should be very familiar with a Traditions course that is known for surrendering some low numbers in past years.

The course, like many courses, has struggled with the continued heat, but for the players that is supposed to break for the final two rounds Saturday and Sunday with temperatures in the low 80s.

Also in the field that includes 14-of-the top 20 teams in the country are: Auburn, California, College of Charleston, Duke, Florida, Georgia, LSU, North Carolina, Oklahoma State, Purdue, Southern California, Stanford, Texas, UCLA and Wake Forest. Arizona State, waiting for its full roster of players to join the team in the spring semester, will play just two individuals in the event.

“We are looking forward to playing again,” said LSU Coach Karen Bahnsen. “We want to move forward from the Preview and continue to play steady golf and to play with the same urgency that we showed in the first tournament. This is another good field and it will be fun to play with our SEC friends in the first round. But it’s all about us, playing our game and not worrying what everyone else is doing on the course in the first round.”

LSU’s lineup will be led by senior Megan McChrystal, who earned national golfer of the week honors from the golf magazines after winning the NCAA Fall Preview individual title with a 54-hole total of 10-under par 206. She culminated the event with a final round of seven-under 65.

The rest of LSU’s lineup is the same with junior Tessa Teachman, sophomore Mary Michael Maggio, junior Jacqueline Hedwall and senior Amalie Valle. Teachman had her best collegiate finish of fourth at five-under par 211 in the preview, while Maggio tied for 13th at three-under 213.

The tournament namesake is a native of Clarksville, Tenn., who won 12 professional wins and was a member of the 1971 USA Ryder Cup team.

The three-round event is set for 54 holes each day starting at 8 a.m. CDT on Friday and Saturday and 7:30 a.m. on Sunday. Live scoring is available at LSUsports.net through www.Golfstat.com.