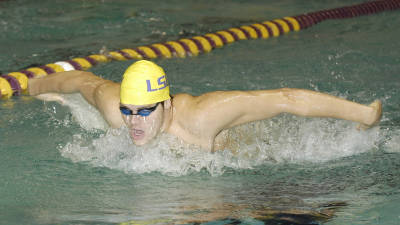 BATON ROUGE — The LSU men’s and women’s swimming and diving teams will compete for the first time in the 2010-11 season when the squads square off in the annual Purple & Gold Intrasquad meet Friday at 3 p.m. (CT) in the LSU Natatorium.

Admission to the event is free. The complex is located at the corner of Nicholson Drive and West Chimes Street adjacent to the W.T. ‘Dub’ Robinson Tennis Stadium and near the Carl Maddox Field House.

In addition, both teams welcomed an influx of talented newcomers with several expected to provide an immediate impact. The Lady Tigers’ signing class was ranked in the top 15 nationally for the second straight season.

“I’m excited to see our teams in action,” head swimming coach David Geyer said. “It’s been a few months since many of our athletes have competed, so we certainly need to get our competitive juices flowing again.

“We are definitely looking to see where our teams are at right now with our first dual meet just a month away.”

Trepp, a senior from Tallinn, Estonia, holds three individual school records and four relay marks and was a finalist in all three of her races at the 2010 SEC Championships. Kendall, the team’s top freshman swimmer a year ago, helped the squad earn a pair of All-America accolades in relay competition at the NCAA Championships last season and recorded program top-10 times in the 50-, 100-, and 200-yard freestyle.

McGee and Goates also captured their first pair of All-America honors last season in relays and will be big contributors in several stroke disciplines. St. Germain, who barely missed qualifying for NCAA’s as a freshman last season, registered program top-five scores in all three diving events and was awarded SEC weekly honors on three occasions.

The Tigers will be led by the All-America trio of Hannes Heyl, James Meyers and Andrei Tuomola, junior Brian Gemberling and sophomore Craig Hamilton.

Heyl, an eight-time All-American, was the team’s top 100-yard freestyle and 100-yard butterfly performer a year ago, while Meyers proved to be the Tigers’ fastest 100-yard backstroker for the second consecutive season as well as a critical component of the medley relays.

Tuomola, the men’s top newcomer last season, was a Freshmen All-SEC performer and emerged as the squad’s fastest 50-yard freestyler and 100-yard breaststroker.

Gemberling, a finalist in both springboard diving events at SEC’s, shattered the school record in the three-meter and was named SEC Diver of the Week twice last season. Hamilton, who broke program records in the 1000 and 1650 free at SEC’s, qualified for NCAA’s in his first collegiate season.

“We’ve worked really hard,” Shaffer said. “Our conditioning has gone really well, and our fundamentals in the pool have been excellent. This is our first opportunity to compete in a head-to-head competition, and we are excited to see what the Tigers bring to the boards.”