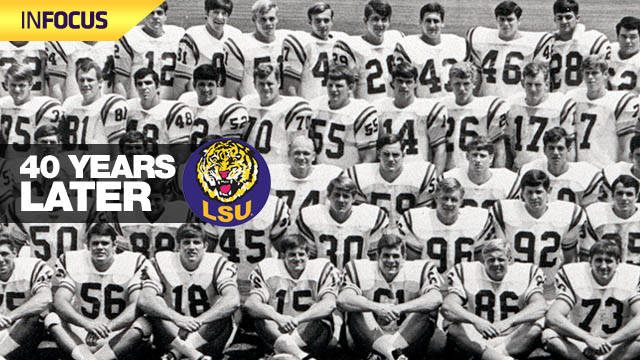 1970 Tigers Produced Some of the Greatest Moments in LSU History

Motivation was not expected to be an issue for the 1970 Tiger football team.

After ending the 1969 regular season with a 9-1 record, the Tigers were expecting an invitation to the Cotton Bowl. Instead, the bid went to Notre Dame, which surprisingly reversed a self-imposed bowl ban. With invitations only coming from less prestigious bowls, the team voted not to play in a bowl game.

Everything changed shortly before the start of the new season, however, when quarterback Butch Duhe died tragically of a brain hemorrhage. Shock and sadness permeated the team.

“That was a bad deal,” said defensive end Arthur Davis. “It shook the whole team up.”

Depleted by preseason injuries and still staggering from the death of Duhe, the Tigers opened the season at home against an inferior Texas A&M team. While leading the entire game, LSU could never put the Aggies away. Trailing with less than a minute to play, Texas A&M completed a 79-yard touchdown pass and held on to shock the Tigers, 20-18.

Fortunately, the next four weeks featured wins over Rice, Baylor, Pacific and Kentucky. While LSU got more of a game than it expected from Kentucky, the team found itself 4-1 heading into the most difficult part of the schedule with road games against Auburn and Alabama.

Though heavy underdogs, the Bayou Bengals jumped on Auburn early, recovering a fumble on the first play of the game and scoring shortly thereafter. Thanks in part to the muddy conditions, LSU was able to slow down Auburn’s dynamic offense and left the plains with a 17-9 win.

“The Auburn game seemed to be the game that took us to another level,” defensive tackle John Sage said.

LSU returned to Alabama after a week off, this time to face the Crimson Tide in Birmingham. The defense led the way again, as the Tigers held Alabama star running back Johnny Musso to 44 yards in a 14-9 triumph. The victory marked LSU’s second straight win over the Tide and its legendary coach.

The sweep of the Alabama schools remains the only time LSU has beaten both Alabama and Auburn on the road in the same season.

After easily handling Mississippi State in Baton Rouge, coach Charles McClendon‘s squad headed to South Bend, Ind., for its first-ever meeting with Notre Dame. The matchup of the two top 10 teams did not disappoint, as the Tigers and Irish engaged in a scoreless defensive struggle through three quarters. With the help of a questionable pass interference penalty, Notre Dame quarterback Joe Theismann led the Irish inside the Tigers 10-yard line, and they kicked a field goal to take a 3-0 lead with less than three minutes to play. LSU could not respond, and Notre Dame held on for the win.

Even though it was a loss, the game goes down as one of the most memorable in LSU history. By playing the Irish so close, the Tigers earned respect from Notre Dame players and coaches, as well as sportswriters across the country.

“If Notre Dame is number one, LSU has got to be one-A,” one Chicago Tribune writer proclaimed.

With the strong performance, the Tigers received an invitation to play in the Orange Bowl, contingent upon LSU defeating Tulane and Ole Miss to end the season.

The Tigers managed to get by Tulane 26-14, setting up the showdown with Archie Manning and Ole Miss. With the Rebels handing LSU its only loss in the previous season, revenge played a huge role in the contest. LSU dominated the Rebels in every aspect of the game, winning 61-17 and giving the Tigers the SEC Championship and the Orange Bowl berth. Fans hurled oranges onto the Tiger Stadium turf amid the rabid celebration.

“I was lucky to get back to the locker room,” defensive tackle Ronnie Estay said.

Meeting third-ranked Nebraska in the Orange Bowl, the Tigers faced a daunting task. With Texas and Ohio State losing earlier in the day, Nebraska learned they would be crowned National Champions with a win over the Tigers. Despite giving the Cornhuskers all they could handle, the Tigers came up short, 17-12, giving Nebraska the National Championship.

The 1970 season started with tragedy and ended in disappointment, but in between were some of the greatest games in LSU history. Forty years later, Tiger players and fans look back at the SEC Championship season with fondness.

“We did not have a big-name team,” Sage said, “but we did really well.”