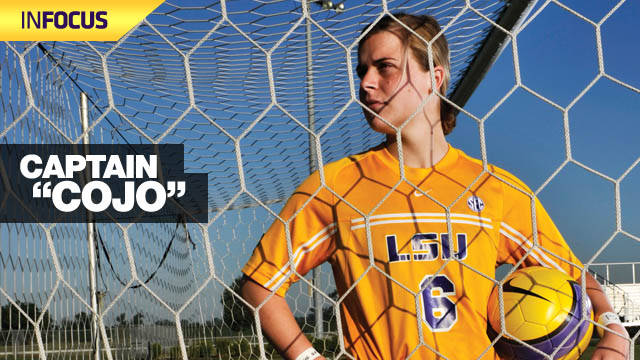 Tied 1-1 with the clock ticking away in a 2009 preseason exhibition against No. 15 ranked Texas, the Tigers needed a spark. With less than six minutes remaining, Courtney Alexander headed in the game-winner to give the Tigers their first ever win in four meetings with Texas.

But the goal itself represented more than just the victory.

Alexander, the lone senior on this year’s team, transferred to LSU from Southeast Missouri State of the Ohio Valley Conference (OVC) after her sophomore season and did not play the following spring. She redshirted the 2008 season.

“My first game back after not playing college soccer for almost two years is especially memorable. The game was against Texas at home, which was the first time I put on an LSU uniform, and that in itself was amazing,” Alexander said.

Her game-winning goal against Texas was icing on the cake and symbolized that she made the correct decision to transfer to LSU. Her short career at Southeast Missouri State was highlighted by enormous personal success. She received the 2007 OVC Medal of Honor for having the highest grade-point average of all soccer players in the conference, as well as being named First-Team All-OVC and the 2007 OVC Offensive Player of the Year.

Alexander, nicknamed “CoJo” by her teammates, decided to transfer for various academic and athletic reasons. Her experience geared her up for the more competitive SEC.

“I would say that the OVC is a very physical conference, and I think that prepared me pretty well for the SEC because the SEC is a combination of skill and physical. Week in and week out, you play better teams in the SEC than you ever would in the OVC,” Alexander said.

With the Tigers looking to extend their streak of three-straight SEC West championships and attempting to capture their first ever SEC championship, head coach Brian Lee named Alexander team captain prior to the season.

Lee said his decision to name her captain was based on Alexander’s leadership on an off the field. Alexander understands that her experience is a real asset to the team.

However, teaching her teammates how to become better people and better players requires a certain style of leadership.

“I’m definitely very vocal at times when I need to be, probably even too vocal sometimes,” Alexander said. “I also like to lead by example. I’m not the most skilled player, but I play with heart and that is kind of how I’ve gotten to where I am at today.”

Alexander possesses a unique ability to play any position on the field and started last season playing in the midfield and in defense. In 2010, she primarily plays on the back line, but Lee does not hesitate to move her around in certain situations.

“This fall we will see her as a ‘jack of all trades.’ She will start the season at left back, and if we are down, we will push her up front,” Lee said.

The Tigers opened up this season playing four of their first six games against nationally-ranked opponents on the road in the non-conference. Although their record stood at 2-3-1, Alexander believes the team improved during those games.

“If we hadn’t been playing that competition, we wouldn’t have known what we needed to fix this early in the season,” Alexander said. “We made a few adjustments that we never would have even known we needed to make if we hadn’t been playing that type of competition. The record doesn’t show how much we’ve improved, but I think the young girls are now figuring out more about the college game. They now see you have to show up to every game, play a full 90 minutes and only get one chance at beating a team.”

Alexander is confident that the non-conference schedule successfully prepared the team for SEC play. She sets the bar high when talking about this season’s goals.

“I know the upperclassmen are really gunning for that SEC championship. If we play to our potential we have a great chance of making a run in the NCAA Tournament.”