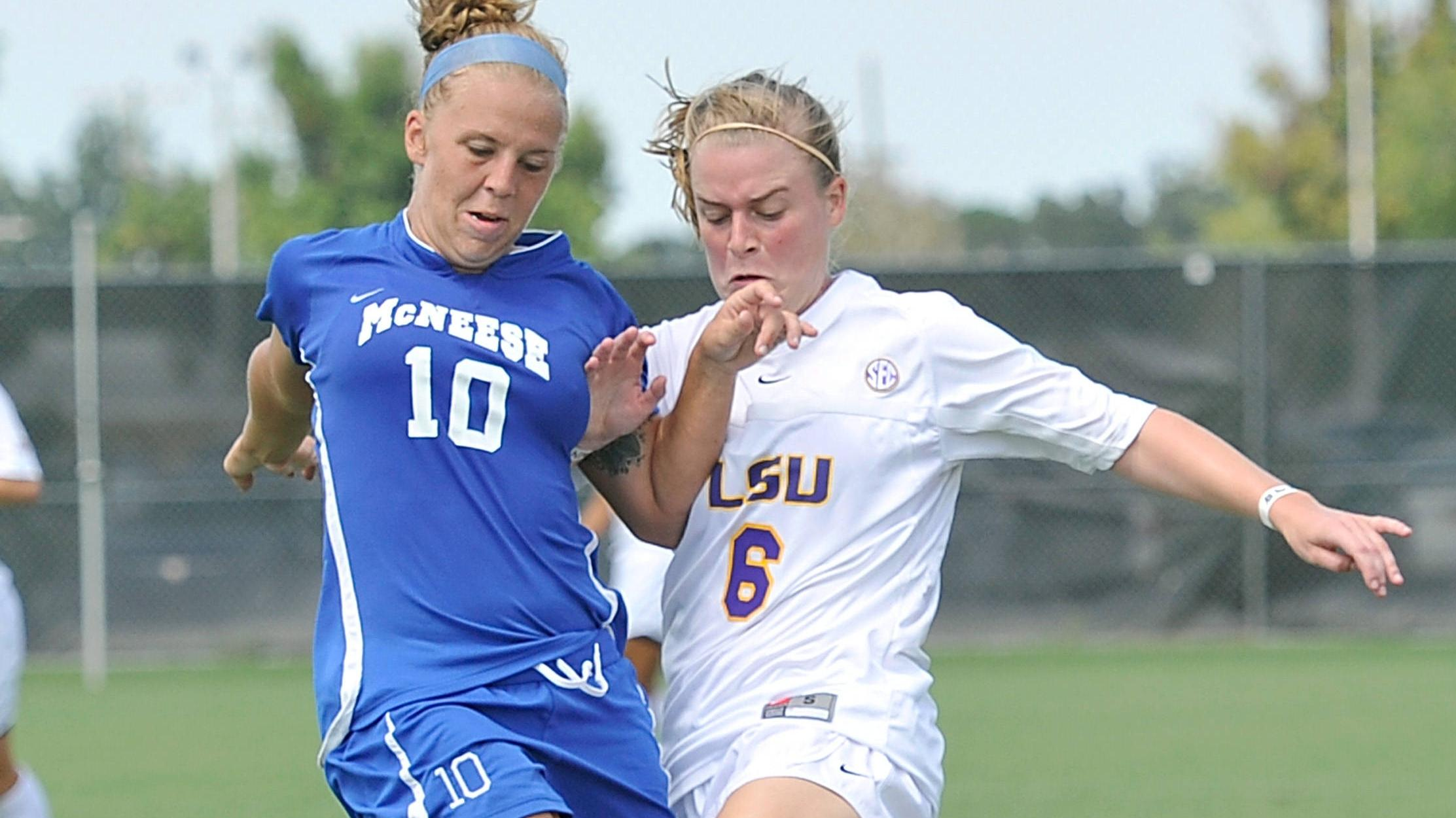 Alexander opened her account for the 2010 season in the 54th minute of play as she turned and fired a left-footed strike inside the right post from 10 yards to give the Tigers a 1-0 lead at the 53:13 mark.

Alexander, the team’s lone senior, showed great composure as she controlled a cross into the penalty area by freshman striker Addie Eggleston with her back to the goal and put a shot on frame while shielding her defender away from the ball. A native of Liberty, Mo., Alexander was rewarded for her persistence as she finished the match with five shots and two shots on goal to help lead the LSU attack.

“I’ll do whatever the team needs me to do and play the positions Brian (Lee) wants me to play to help our team be successful,” Alexander said. “We just need to get into a little bit of a rhythm and continue to work hard. I think if we keep working hard as a team, the goals will follow. We were better at that today.”

Martineau then put the game out of reach in the 72nd minute of play with her second goal of the campaign on a brilliant combination with fellow Canadian Allysha Chapman.

After taking possession of the ball along the left wing, Chapman cut back and sliced through the midfield before slotting a perfect through ball to Martineau sprinting behind the McNeese State back line. Martineau then dribbled around Cowgirl goalkeeper Cassandra Read who came out to challenge and fired a strike into an empty net from eight yards to give LSU a commanding 2-0 lead at the 71:56 mark.

With the win, the Tigers (3-4-1) extended their home unbeaten streak to 12 games dating back to the 2009 season and improved to 7-1 all-time against the Cowgirls (2-7-0) with their sixth-straight win in the series against their in-state rival. LSU is now 10-0-2 in its last 12 matches at the LSU Soccer Complex.

“I thought it was a typical Sunday game where it was tough to get moving. McNeese did a great job of slowing the game down,” said LSU head coach Brian Lee. “Getting the first goal was big for us. Courtney showed great composure in front of goal and put it away. The second goal was a real quality goal with an outstanding overlap by Natalie Martineau to put herself in a great position to score.

“We’re making progress, and we have so many young kids who just need some time on campus and in the program and in the weight room until they really get it. We’re also trying to win as many games as we can along the way. We’ve got the SEC season coming up, so I know we’re all looking forward to that.”

Junior goalkeeper Mo Isom pitched her third shutout of the season and recorded her 22nd clean sheet as an LSU Tiger as she moves into a five-way tie for eighth place on the SEC’s all-time list for career shutouts.

Isom only faced three shots in the win as the LSU defense held the Cowgirls without a shot on goal on the afternoon. The Tigers dominated the game from the opening kickoff while outshooting McNeese State by a 23-3 count with a decisive 12-0 advantage in shots on goal and a 7-1 edge in corner kicks.

With the non-conference schedule now in the books the Tigers will turn their attention to the Southeastern Conference as they open league play Friday night with a trip to Athens, Ga., as they square off against the 21st-ranked Georgia Bulldogs at the UGA Soccer Stadium at 6 p.m. CT. LSU will then travel to Knoxville on Sept. 26 to take on the Tennessee Lady Volunteers at 1 p.m. at the Regal Soccer Stadium.