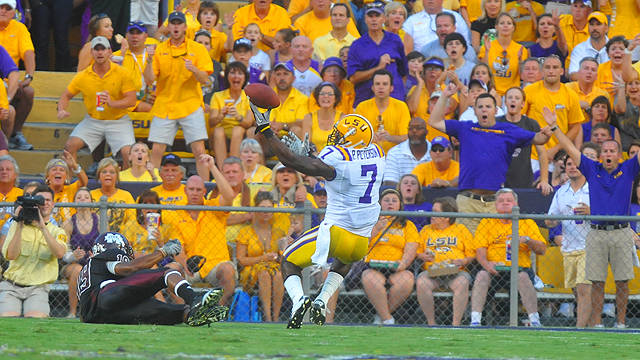 BATON ROUGE — A staunch defense that intercepted five passes and an offense that scored on its first seven possession gave the No. 15-ranked LSU football team its 11th-straight victory over Mississippi State, 29-7, in the home opener in Tiger Stadium on Saturday night.

LSU (3-0, 2-0 SEC) needed the right foot of placekicker Josh Jasper to secure a 12-0 halftime advantage with a school-record four field goals in the half. After Mississippi State scored on the opening drive of the second half, LSU answered with two touchdowns and a field goal on its next three possessions to improve to 2-0 in Southeastern Conference play.

Jasper broke his own school record with five field goals, converting from 44, 32, 51, 37 and 21 yards. LSU punted once — also Jasper — and committed its only a turnover while driving late in the fourth quarter with the game in hand.

Quarterback Jordan Jefferson completed 10-of-16 passes for 97 yards, while LSU ran 39 times for 167 yards. Stevan Ridley led the Tigers with 78 yards on 19 carries and a 2-yard touchdown. Jefferson carried 10 times for 40 yards including a 16-yard touchdown, and he was sacked once. Freshman running back Alfred Blue had five carries for 36 yards with a fumble.

Mississippi State dual-threat quarterback Chris Relf started and had 35 yards passing on 5-of-8 attempts before leaving the game in the third quarter with an injury. He ran seven times for a team-high 46 yards including a 6-yard sack. Robert Elliott added 39 yards on the ground, while Vick Ballard carried 11 times for 28 yards and the Bulldogs’ only score from 1 yard.

Tyler Russell played most of the second half at quarterback for Mississippi State, completing 5-of-10 passes for 81 yards but threw three interceptions under the heavy LSU pressure.

Mississippi State won the coin toss and elected to defer to the second half, opting to kick to Peterson to open the game. Peterson returned the kick 39 yards down the right sideline to the LSU 42-yard line. Two first-down runs by Jefferson gave the Tigers first-and-10 at the MSU 35, however, his third-and-3 pass to Toliver came up a yard short of the down marker.

Jasper came through with his first of school-record four first-half field goals. The 44-yarder gave LSU a 3-0 lead with 9:38 left in the first quarter.

The Tigers defense allowed only one first down before ending the Bulldogs’ opening drive with a 6-yard sack by freshman defensive back Tyrann Mathieu.

After a Peterson fair catch of the punt, Jefferson put the Tigers in Bulldogs territory with a 21-yard strike to wide receiver Russell Shepard. An 8-yard pass to wide receiver Rueben Randle and a 3-yard run by Jefferson each gave the Tigers first downs, as LSU had first-and-10 at the MSU 14. On third-and-11 from the 15, Jefferson’s pass to Shepard was broken up at the line of scrimmage. LSU settled for a 32-yarder by Jasper for a 6-0 lead wih 14:50 left in the half.

The Bulldogs advanced into LSU territory on a 9-yard run by Relf and maintained the drive with a fourth-and-1 convertion to the LSU 45. On third-and-1 from the LSU 36, Relf tried to catch the Tigers off guard with a deep pass. He threw in the direction of Peterson, one of the nation’s finest cornerbacks, who went high, tipped the ball to himself and intercepted the pass at the LSU 2-yard line.

Peterson’s 46-yard return to the LSU 48-yard line setup another short drive and long field goal by Jasper. Shepard dropped a pass on third down before Jasper converted from 51 yards. The second-longest field goal of his career gave LSU a 9-0 lead with 7:37 to play in the half.

Mississippi State gained two first downs and neared midfield when LSU linebacker Kelvin Sheppard pressured Relf from the left side, hit the quarterback as he threw and allowed cornerback Morris Claibourne to intercept the pass at the LSU 30. A 28-yard return to the MSU 42 setup another Tigers field goal.

A 20-yard run by Ridley moved the Tigers to the MSU 22 and a personal foul by the Bulldogs setup first-and-10 at the Bulldogs 14. However, three plays led to six yards lost and gave Jasper his school record-setting fourth field goal of the half from 32 yards.

LSU took a 12-0 lead into the lockerroom.

The Tigers’ inability to put the ball into the endzone looked to be costly early in the third quarter, as Mississippi State made its most progress when backup Tyler Russell entered in place of Relf. Russell, more of a passing threat, completed passes for 17 and 19 yards on consecutive plays to setup first-and-10 at the LSU 16. Six runs later, Ballard scored on third-and-goal from the 1.

The score woke the Tigers offense, which took only seven plays to answer the touchdown score. Jefferson connected with Toliver for 15 yards and then Randle for 18 yards to the 19 before taking the ball himself and scoring his third career touchdown from 16 yards out.

With Mississippi State nearing midfield again, the Tigers came on another third-down blitz. With defenders swarming, Russell’s pass attemped was batted into the air by Mathieu and intercepted 15 yards behind the line of scrimmage by LSU defensive tackle Drake Nevis. The Tigers big guy landed with the ball at the MSU 28, where LSU took over.

Jefferson’s 18-yard completion to Toliver on first down put the Tigers in the red zone. A 2-yard touchdown run by Ridley gave the Tigers a 26-7 lead with 1:23 left in the third quarter.

Jasper tacked on a 21-yard field goal with 12:05 to play, breaking the school record with five in a game.

Tonight’s attendance was 92,538, the 14th-largest in stadium history.