by Mark Slavich
Behind the Scenes: Sheppard Photo Shoot +0 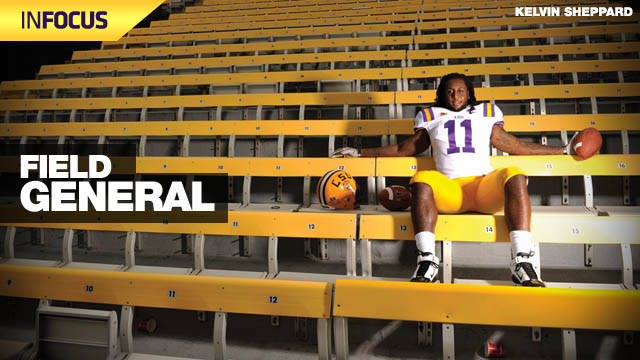 The phrase is the preeminent goal of the Tigers’ 2010 campaign after allowing fourth quarter leads to slip away a season ago.

The motto also applies to LSU senior linebacker Kelvin Sheppard. The preseason All-American returned for his senior season to lead a young and talented Tiger defense. After a stellar 2009 season, in which he led the team with 110 tackles, Sheppard decided to put the NFL on hold and return to Baton Rouge to earn his degree and finish his career with what he hopes is a championship. An in-depth look at Sheppard’s career at LSU reveals a journey that has been anything but common.

Sheppard originally committed to LSU shortly after his official visit the weekend of the Tigers’ win over Florida in 2005. But the Stone Mountain, Ga., native wavered on his pledge for months, debating between coming to LSU and heading to play at Tennessee.

“The night before signing day, I still was unsure what school I was going to sign with,” Sheppard said. “I just woke up the next day and felt like LSU was the place for me.”

Stephenson High School teammate and former Tiger Perry Riley was going through a similar process at the same time, weighing LSU and Tennessee as well. According to Sheppard, the two made independent decisions to attend LSU.

“I didn’t tell anyone I had committed when Perry made his decision,” he said.

After arriving at LSU in 2006, both Sheppard and Riley were low on the Tigers’ depth chart. But while Riley played as a true freshman, Sheppard was forced to redshirt, something he says was extremely difficult to do.

“I had second thoughts about whether I should have come here and whether this was the right place for me,” Sheppard said. “I think it was just a natural thing.”

As a redshirt freshman on the Tigers’ 2007 National Championship team, Sheppard saw limited playing time at the Will linebacker position. However, he was a key member of the special teams unit, recording 15 tackles while covering kickoff and punt returns. Still, Sheppard was a relative unknown to many Tiger fans, as he was most known for being the “other number 11.”

Many people confused Sheppard for former Tiger quarterback Ryan Perrilloux (who also wore No. 11), something the linebacker says they used to share laughs about.

“I thought it was funny because Perrilloux and I were friends, so we used to always joke about it,” he said.

Sheppard had a successful season individually in 2008, finishing second on the team with 64 tackles, including recording a career-high 17 tackles against Ole Miss. The team and the defense in particular, however, struggled. After finishing the 2007 season ranked third in the country in total defense, the Tigers fell to 32nd nationally in 2008. While some people may have been satisfied with a successful individual season, it was not the case with Sheppard. “Regardless of my individual success, it was hard when my team was struggling,” he said.

After Mallory and Peveto left to take positions at other schools following the 2008 season, the Tigers once again had to find a new defensive coordinator. This time Miles turned to a familiar face, not only to Tiger fans, but also to Sheppard, in bringing in former Tennessee defensive coordinator John Chavis.

While at Tennessee, Chavis heavily recruited Sheppard, nearly luring him to Knoxville.  “He had a lot to do with my interest in Tennessee,” said Sheppard. “That is the only thing that I was weighing it on, going to play for him at Tennessee, knowing that he was going to be my linebackers coach and how much he wanted me to come to Tennessee.”

Needless to say, Sheppard was thrilled when he learned Chavis had been hired as LSU’s new defensive coordinator.

“When I heard it was official, I was very happy and excited,” he said. “Coach Chavis and I got in touch with each other and talked.”

Following three seasons under the same defensive system, Sheppard and the Tigers were forced to learn a new scheme for the first time in the Les Miles era. The transition, however, was relatively easy.

“It went much smoother than you would think,” Sheppard said. “Coach Chavis did a great job and made everything very simple for us so that we could go out and play, and we had a pretty good year defensively.”

With Chavis leading the defense in 2009, Sheppard enjoyed the best year of his career, leading the team and ranking fourth in the SEC with 110 tackles.  He said he has learned a tremendous amount from Chavis, from improved technique to being a better leader.

“The main thing, which my high school linebacker coach originally told me, is to try to be the smartest person on the field and always know not only what I am supposed to do, but also what everyone else is supposed to be doing,” he said.

Consequently, the defense as a whole also had a great season, finishing ranked 12th in the country.

With only four returning starters on defense this season, Sheppard knows he has a huge responsibility as the leader of the defense.

“The biggest challenge is being able to help some of the guys on the field, because off the field, Coach Chavis can talk to them and show them the plays,” he said.  “I have to know all the assignments that everyone has so that I can respond and help them out.”

Even with all the inexperience on the defensive side of the ball, Sheppard and the Tigers still have huge goals this season.

As far as individual goals, Sheppard said he really doesn’t have any.

“I really don’t talk about myself too much,” he said. “I just want to earn my degree and leave here as a champion, winning an SEC and National Championship.”

The Tigers opened up the season against North Carolina in Atlanta, just 15 miles from Sheppard’s hometown of Stone Mountain. If things go well, Sheppard will make one more trip home in early December for the SEC Championship Game.

“We are going to make that trip,” he said.