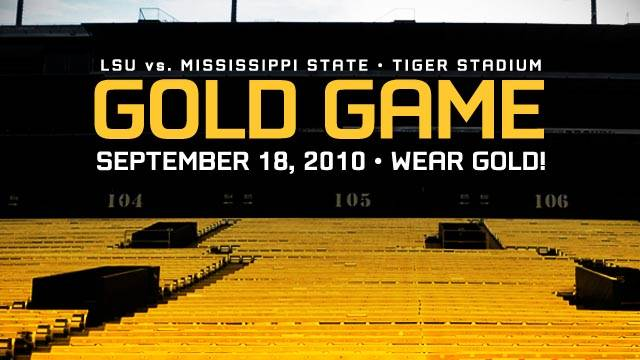 The game will serve as LSU’s annual Gold Game and fans are encouraged to wear gold in Tiger Stadium on Saturday night.

Kickoff for the Tigers and Bulldogs is set for 6:05 p.m. CT. The game, which is sold out, will be televised nationally on ESPNU and can also be heard on the LSU Sports Radio Network (98.1 FM in the Baton Rouge area) as well as in the Geaux Zone on LSUSports.net.

LSU brings a 2-0 record into the contest following wins over North Carolina and Vanderbilt to open the year. LSU is ranked No. 12 in the USA Today Coaches’ Poll and No. 15 in the Associated Press Top 25. Mississippi State is coming off a 17-14 loss to Auburn last Thursday and stands a 1-1 overall and 0-1 in league play.

Last year, a goalline stand by the Tigers as time expired proved to be the difference in LSU’s 30-26 win over Mississippi State in Starkville. Overall, LSU’s won 10 straight and 17 of the last 18 against the Bulldogs.

“We’ve had a good week of practice,” LSU coach Les Miles said. “The players have worked hard with good focus and execution on the practice field leading up to this game. Mississippi State is a very talented team and we have great respect for Coach Mullen and what he’s done in the short time that he’s been there.

“We are excited about finally getting home and playing in front of our fans in Tiger Stadium. It’s the greatest game day environment in college football; I can’t wait to lead my team down Victory Hill and to run out of that chute for the first time tomorrow night.”

LSU goes into the contest looking to continue to build on last week’s performance, one that saw the Tigers dominant the line of scrimmage on both sides of the football. Offensively, LSU rushed for 280 yards – the most by the Tigers since the 2007 season, while the defense recorded six sacks against the Commodores, giving the unit a nation’s best 10 through the first two weeks of the season.

Tiger quarterback Jordan Jefferson will lead a Tiger offense that is averaging 28.5 points and 352.5 yards per contest. Jefferson, who has an 11-5 record as a starter, has thrown for 247 yards and a pair of touchdowns during the first two weeks of the season.

The strength of the Tiger offense has been the play of their running backs, in particular Stevan Ridley, who ranks third in the SEC with 240 rushing yards. Ridley is coming off a career-best 159 yards in last week’s 27-3 win over Vanderbilt. Wide receiver Russell Shepard is second on the team with 115 yards rushing and he’s scored on TD runs of 50 and 30 yards during the first two weeks. The Tigers are averaging 221 yards on the ground per game.

Rueben Randle and Terrence Toliver both have six receptions to lead the Tigers, while tight end Mitch Joseph has developed into a receiving threat during the first two weeks with four catches for 51 yards.

“The key is to improve and get better with each game,” Miles said. “Last week, we did a great job of running the football. I think our line play has improved in our first two games. I think we need to get off to a better start on offense; last week we started slow and didn’t get into any rhythm.

“Jordan can run this team. We have get to more consistent play at that position and I think the key is getting Jordan to be more aggressive and trust his reads. He had a very good week of practice, now he needs to bring it from the practice field to the playing field, which we have confidence that he can do.”

Defensively, the Tigers have been dominating against the run, allowing just 44.5 yards per game, while also averaging 5.0 sacks a contest. Senior defensive tackle Drake Nevis, the SEC Defensive Lineman of the Week for his play against Vanderbilt, leads the league with 3.5 sacks to go with nine tackles and a quarterback hurry.

Linebacker Kelvin Sheppard leads the team with 19 tackles, while true freshman cornerback Tyrann Mathieu is second on the squad with 12 tackles.

The Tiger defense will be challenged this week by a Mississippi State offensive attack that features a two-quarterback system in Chris Relf and Tyler Russell. The duo has combined to throw for 501 yards and five touchdowns.

“They are going to do a variety of things on offense,” Miles said. “Both quarterbacks can throw and both of them can run a little, one of them more than the other. There are some things that one quarterback does over the other, but there is still the duality of run and pass.

“I think they are very committed to running the football.  We are going to play the run down after down, and that is going to be in my opinion a real challenge to our defense.”