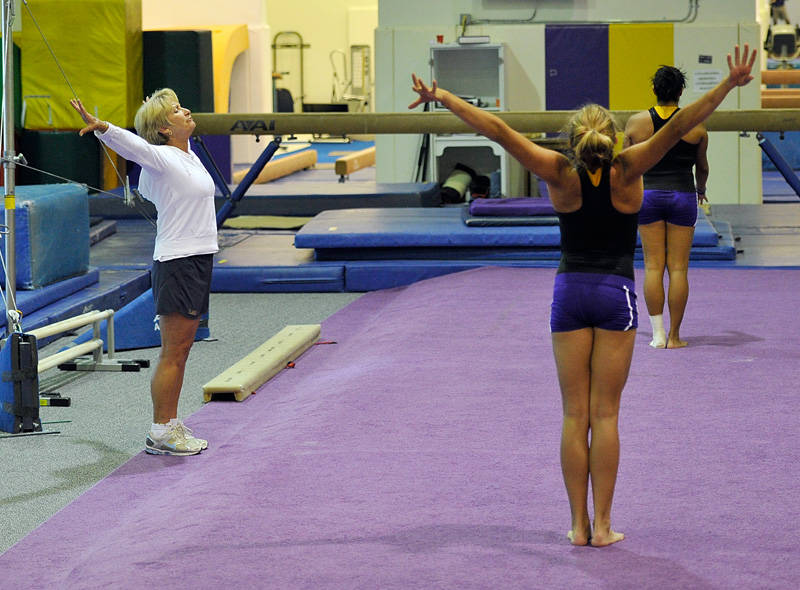 D-D Breaux enters her 34th season as head coach of the Tigers, and assistant coaches Philip Ogletree and Bob Moore begin their 11th and 12th seasons with the team, respectively.

The coaching staff welcomed a young team for the first day of practice with just one senior on the squad in All-American Samantha Engle and two juniors in All-American Ashley Lee and All-SEC Gloria Johnson. LSU features three sophomores, two redshirt freshmen and seven true freshmen for the 2011 season.

“We are young and unproven in a lot of individuals, and we will rely on some brand new freshmen in 2011,” Breaux said. “It is exciting because the kids are eager to learn in the preseason segment of what we are doing, and we are optimistic about this team.”

The coaches put the team through conditioning exercises as well as line drills on the floor before having the team begin workouts on vault, bars and beam.

“We have a lot of skill development to do, a lot of routine construction to get done in the gym, so we have a long road ahead of us,” Breaux said. “It will all come together by January when we open the season.”

The Tigers will continue fall workouts on Friday before preparing for the annual team reception on Sept. 24 at the LSU Faculty Club.

For the latest information on LSU gymnastics, check out LSUsports.net/gymnastics and follow the team on Facebook.com/lsugym and @LSUgym on Twitter.