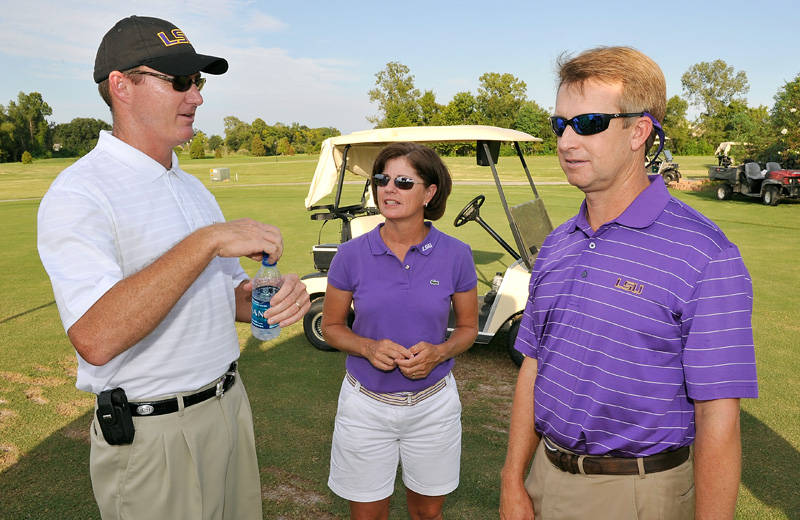 BATON ROUGE – The home course of the LSU men’s and women’s golf team was officially reopened by PGA major champion and former LSU All-American David Toms Thursday evening as the public got a first-hand look at some of the recently completed renovations of the University Club.

Toms, who earlier in the afternoon had spent time at the LSU Golf House on the back of the range hitting golf balls with members of the LSU golf teams, put on a 40-minute exhibition on the front of the range in front of several hundred golf enthusiasts ranging from junior golfers to those who play from the senior tees.

“This project has really turned out to be something special,” said General Manager Jared LeBouef. “Not only for LSU, but for the neighborhood, for the members and for Baton Rouge as well.”

The course received recognition even before it was opened as it was awarded the 2013 NCAA men’s golf regional, the first time the LSU men’s team will host a regional in Baton Rouge.

“We wanted to strengthen the driving areas so that when they went to a golf tournament, the players felt they could drive the ball if they were playing the U-Club every day and working on their driver and we wanted to challenge them in the short game,” said Toms.

“Putting is the name of the game so we elevated the greens where they would roll off. The greens are firm so you have to be able to pitch the ball, lob the ball, bump and run whatever you got to do. We’ve created both of those things and at the same time, especially now, second shots are at a premium. So it’s about as tough a course as they are going to find.”

Toms in his exhibition went through many of the clubs in his bag, smoothly starting with his wedge, then a 7-iron, advancing up to a three-hybrid club before breaking out his driver.  Toms answered questions from the audience even while hitting shots.

Club member Chad Magee was chosen from the names of the spectators to play a three-hole exhibition with Toms on the par four 10th, the par five 11th and the signature hole, the long par 4 18th that has native grasses and plenty of water to deal with.

Magee stayed with the former LSU All-American, as both bogeyed the 10th and parred the 11th. On the 18th, both players hit near perfect drives into the fairway, but Magee was a little long and hit his approach through the green into a difficult chipping area. Toms, on the other hand, hit a perfect approach that rolled up to 15 feet in the gathering darkness.

Magee’s difficult chip rolled over the green and he would take a bogey. Toms birdie putt appeared to be on line all the way until the last possible second when it broke off the hole and he settled for par.

The gallery enjoyed walking down the middle of the fairway with the players with Toms answering questions and cracking jokes along with Magee who showed few nerves in the situation that include multiple still photographers and videographers from four media outlets recording the event.

The event then moved into the clubhouse for a reception and more interaction with Toms who will play here Friday in a TAF event and then as per the norm in the fall, attend the LSU football game with Mississippi State on Saturday.

“It hasn’t gone unnoticed what the membership has gone through to allow this to happen,” said LSU men’s golf coach Chuck Winstead regarding the closing of the course for some nine months. We think this event will grow not only LSU golf, but will grow the U Club as well.”

“The course is already living up to what we are selling,” said LSU women’s golf coach Karen Bahnsen. Citing the men’s opening tournament win and the women’s record-setting second place finish in the NCAA Fall Preview, Bahnsen said, “Our golf team by playing out here just in the short time the course has been open, it was the most prepared we’ve ever been for a tournament.”

Toms did say his year was a success on the tour although he did not qualify for the Tour Championship next week in Atlanta.

“Overall it was solid year but any time you don’t win it’s kind of a downer,” he commented. “I got close a couple of times and look forward to getting off to a fast start next year. I’ve got a couple of tournaments this fall I can build on in the fall series and try to get some confidence going into next year.”