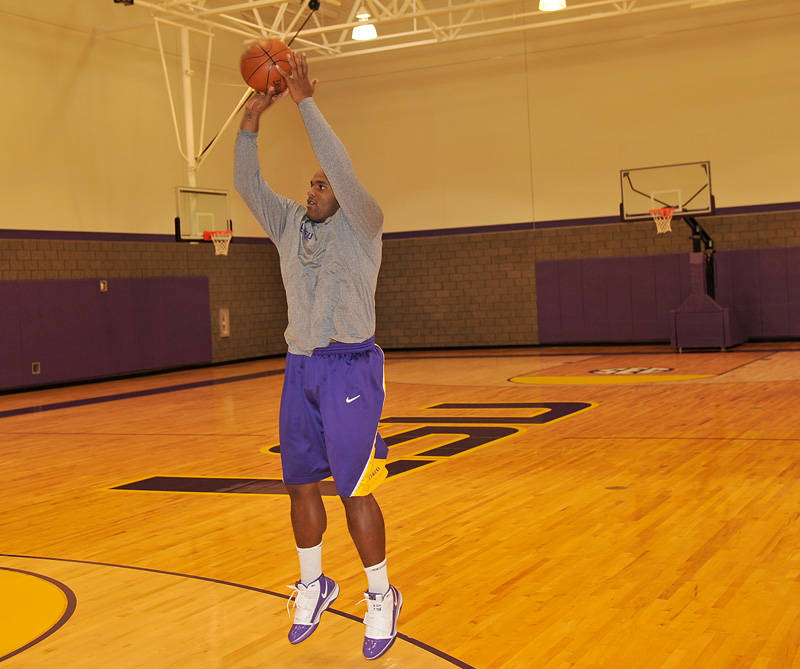 BATON ROUGE – He walked down the hall of the new practice facility toward a mural of the 16-members of LSU’s All-Century team.

His face is easily recognizable in the mural and when he shook my hand and gave me a big hug the face was the familiar one I knew well for three years here at LSU.

Big Baby, Glen Davis, was back in town.

Davis is enjoying a little down time before the team gathers again on Sept. 27 for Media Day in Boston before beginning training camp on the 28th at Newport, R.I.  Training camp to figure out a way to erase the painful memory of a game 7 loss to the hated Los Angeles Lakers. More importantly, training camp to figure out how to be the best in the Eastern Conference that is more loaded and structured a bit differently with the off-season developments in Miami.

“Miami has built their team to be a strong competitor,” he said. “And then you have Chicago with young talent and Carlos Boozer is with them. The East will be really strong. It’s going to be interesting to see how it all plays out in the East.”

Davis said he has been working hard, working especially to get his game to be a straight four player like he was in 2008-09 season. That will be more his spot with the Celtics addition of Jermaine O’Neal and some other guy who did his thing at LSU as well, Shaquille O’Neal.

“It’s crazy,” Davis said smiling. “I can remember days when I was just a little boy watching him play here at LSU. Shaq was everywhere in the city. To be in the NBA and play against him and now having him on the same team it’s unbelievable. I’m so glad he’s on our team and he can help us get back to that championship.”

Now that he’s about to enter his fourth season and as the owner of an NBA championship ring, Davis admits to understanding and feeling all there is about the Celtics’ longstanding traditions and history.

“Most definitely, especially when you win a championship because that’s what the Boston Celtics are most known for,” he said. “Being a part of the NBA and in Boston, the people there have welcomed me as a part of their family  and to be able to play with the Celtics has really been a blessing.”

Davis is quick to point out there are a lot of fans in LSU purple and gold cheering him on when he plays as well.

“You know what? There are a lot of purple and gold fans everywhere. The places I’ve been and seen, you’ve be surprised how many LSU fans there are in Boston. “

And while they cheer for the Hornets in the New Orleans Arena, Davis gets his share of love when his team comes to town.

To play in front of a hometown crowd like that is unbelievable,” he said. “They have always shown me love down there. I always look forward to playing the Hornets in New Orleans.”

But back in Baton Rouge on Wednesday, Davis met with Coach Trent Johnson, watched some of the walk-on tryouts and got a tour of the new practice facility from the LSU coaching staff and that facility is what had Davis’ eyes open wide.

“Man I’m jealous, I’m so jealous,” Davis smiled. “To see how beautiful this is. The things that LSU has put together here. Just to be a part of this program is amazing. I just wish we had this when I was here, but hey, I feel like we helped pave the way for these guys and this beautiful facility. I’m glad they can enjoy something like this to better their careers.”

Davis was the 2005 SEC Freshman of the Year and the 2006 SEC Player of the Year as the Tigers advanced through the NCAA Championships to the Final Four. On the way, the Tigers best No. 1 ranked Duke and nationally-ranked Texas to advance to the national semifinals. Davis earned first-team Wooden All-American honors as a sophomore for that 2006 season. He left LSU after his junior year and was drafted by Seattle, who made Davis’ future bright by trading his rights to Boston. It was his spirited play, his ability to score from anywhere and a nose for the ball in rebounding that earned him his spot on the prestigious 100th anniversary team announced in Jan. 2009.

“When I think about (the 100th anniversary team), it is almost like immortality,” he said, pondering his picture on the wall behind him. “No matter what, I’ll always be a part of LSU. Just being a part of that team, it’s unbelievable. There were so many big games, the Final Four, just so much. It just means a lot to be recognized as one of the good players that came through here.”

Davis’ time was unique in that it really wasn’t just three years on campus, it was his high school years on campus at the University Lab School where the Cubs won two state basketball titles. The Baton Rouge boy who grew to be a basketball star still loves his hometown and the chance to come visit.

“You can go everywhere in the world, but there is no place like home,” Davis said. “That’s what I realized. Baton Rouge has this special feeling. There are things you can always remember and think about. LSU has been great to me. I’ve grown up here. I went to high school on campus. I went to college here. It’s been amazing. Just coming back means so much to me and just to be a part of the LSU family means a lot.”

Which translates to don’t be surprised if there’s a Big Baby sighting Saturday night when the Tigers play football against Mississippi State. The Boston Garden, the PMAC, Tiger Stadium, the LSU campus. Home is where the heart is and Davis’ big heart has several spots he can enjoy the moments, past and present.