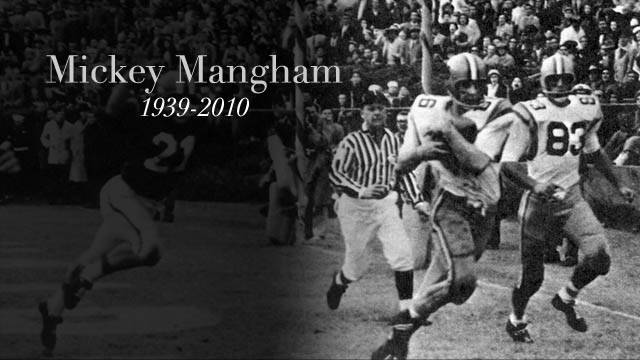 Visitation will be held Friday from 4-8 p.m. at Martin & Castille Funeral Home, 330 St. Landry Street in downtown Lafayette. Services will be at Episcopal Church of the Ascension at 10:30 am on Saturday with visiting afterward at the Mangham home. View the obituary and guestbook online at www.mourning.com.

Mangham lettered at LSU from 1958-60 and helped lead the Tigers to the 1958 national championship as the right end on the “White” team, or first-string unit.

Mangham scored the only touchdown in LSU’s 7-0 win over Clemson in the January 1, 1959 Sugar Bowl, a victory which culminated the ’58 national championship season. Mangham caught a nine-yard TD pass from Billy Cannon in the third quarter to provide the game-winning points.

Mangham was named a first-team Academic All-America in 1959, and he earned second-team All-SEC recognition the same year. He graduated from LSU in 1962 with a petroleum engineering degree, and he earned an LSU Law School degree in 1966.

Mangham, who worked as an attorney in Lafayette, served with distinction as the chairman of the Tiger Athletic Foundation during the 1990s.