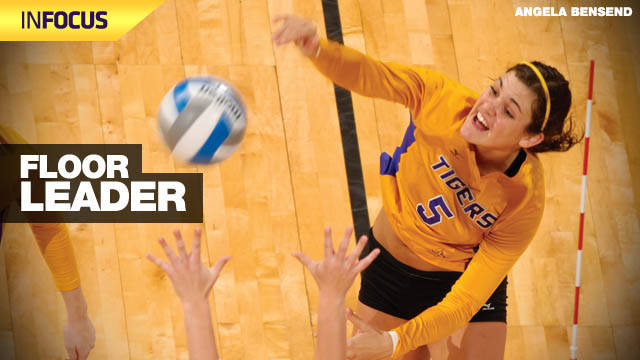 From the first day she stepped on campus as a freshman, Angela Bensend has been a driving force for the LSU volleyball program. Her work ethic and team-first mentality have distinguished her career.

Part of her success can be credited to her experience at Frisco Centennial High School in Texas where she developed her skills as an outside hitter playing both the left and right sides. She has been counted on to fill those same roles at LSU. Bensend excels no matter where on the court head coach Fran Flory needs to play her.

During her freshman season in 2007, Bensend played in all but one match and made 29 starts, the most of any freshman that year. She had a career-high 16 kills and six blocks, each happening twice that year. One of those 16-kill performances was versus New Mexico State in LSU’s 3-2 comeback win the first round of the NCAA Tournament.

She played in all 28 matches in her sophomore season, starting in 26 of them. She went on a tear against SEC opponents, powering home 108 of her 153 kills. But it was during that season things suddenly started taking a turn for the worst.

“They had to tighten the ligaments in my shoulder because every time I hit [the ball] my ligaments were so loose that my arm would pop out of its socket,” she said.

The road to recovery seemed long and grim, but determination and hard work pushed Bensend to get back on the court sooner than predicted.

“They said my recovery was going to be six to nine months, but I came back playing in around five to six [months] so I just had to ease into it slowly,” she said.

Bensend started in the final 22 games of her junior season in 2009, playing stronger than ever. She posted a trio of double-digit kill performances and her enhanced level of play helped the Tigers capture their first SEC title since 1991.

Having won the SEC West Division Championship and advancing to the NCAA tournament every year that she’s played at LSU, Bensend expects nothing less from her team this season.

“We always have goals to get as far as possible. We expect ourselves to become SEC West champions, and we hope to compete within the SEC to be one of the top two or three teams in there,” she said. “We just want to make sure we compete well the whole season so that we get further in the tournament and work our way up.”

Although earning two SEC honors her freshman year, Bensend focuses on team achievements rather than personal ones.

“I don’t really care about individual awards. I’m not really into that. I’m just more about us winning because individual awards don’t matter at the end of the day if your team doesn’t win,” she added.

Although there’s no concern for personal awards, Bensend does set personal goals. One goal that she set as a freshman was to be named a team captain her senior year. With her positive attitude and consistent hard work, that goal was achieved over the summer.

She and Lauren Waclawczyk were voted captains by their teammates before the season began. With her title comes the responsibility of being a role model for the rest of the squad.

“I always try to be a leader on and off the court,” Bensend said. “That means working hard every day in practice. Outside of practice I’m being a good citizen and at the same time working hard on my academics. I’m just trying to be a good example for the younger players.”

Bensend has put her leadership skills into action to start 2010. She ripped a career-best 20 kills and added a career-high 26 digs during LSU’s 3-2 win at TCU, and the Tigers are currently ranked in the AVCA Top 25.

Lessons learned on and off the court throughout her career have made Bensend a better player and leader. There is one important lesson she’s learned that she tries to instill in the younger players: the spirit and camaraderie of being an LSU Tiger.

“I love the atmosphere and I love the coaches and our teammates,” she said. “We’re just really a team and it’s a lot of fun. I’ve loved all the years I’ve been here, ever since the day I arrived.”