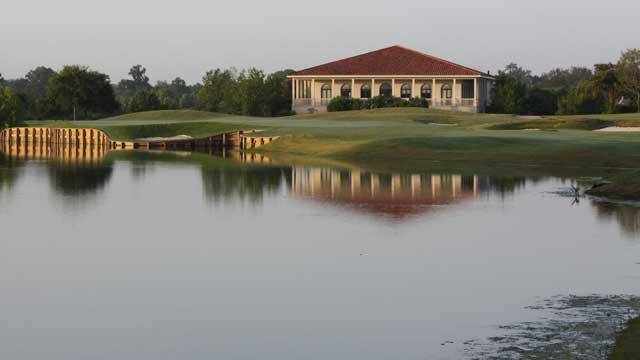 BATON ROUGE – PGA Champion and former LSU All-American David Toms returns to the University Club for an exhibition and ceremonial re-opening of the course that has been closed for most of the year for an extensive renovation that has turned the course into one of the toughest in the state of Louisiana.

Toms will appear beginning at 5:30 p.m. Thursday on the Club’s driving range along with LSU women’s coach Karen Bahnsen and men’s coach Chuck Winstead. Toms will lead an exhibition session on the rage before heading out at 6:30 p.m. to play the newly designed 10th, 11th and the signature 18th hole.

All three have undergone significant changes that include bunkering, native grasses and water extension, which will be more than visible as it comes into play along the long par four 18th with 180-yards of bulkhead down the left fairway up to the green.

In all the course was lengthened from 7,200 yards to 7,700 for the Tiger Tees and the course has more definition and character than the original layout. Jim Lipe, one of the game’s premier course designers, with design help from Toms, has reworked the course into one that already has been selected to host a men’s NCAA Regional in 2013.

The site has already paid off as a prep for the men’s and women’s teams for their first tournaments, a win for the men’s team and a second with a record low score for 54 holes for the women in the prestigious women’s NCAA Fall Preview.

Back when the renovation was announced in September 2009, Toms said, “You want (your players) to be able to play a golf course that’s going to challenge their game off the tee. Not just into the greens and second shots, but also around the greens. You want them to be able to show up at other golf courses and be prepared to play at that level. It’s going to be a great tool for the golf teams, for the university and something we can all be proud of.”

The course has been open for member play for less than a month. For more information on membership contact the U-Club at 225-819-9855.