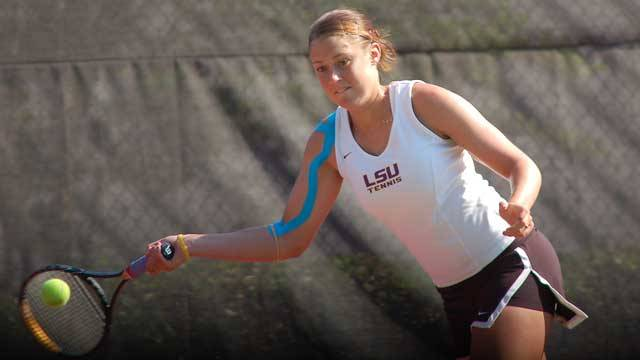 AUBURN, Ala. — LSU junior Whitney Wolf and freshman Ariel Morton each captured victories in singles to lead the Lady Tiger tennis team on Day 1 of the SEC Coaches’ Classic in Auburn, Ala., Friday.

Wolf, who was ranked No. 122 in the preseason Intercollegiate Tennis Association singles rankings released earlier today, took down 20th-ranked Kristi Boxx of Ole Miss in three sets, 6-3, 2-6, 6-4, in the Flight 1A draw. Morton defeated Auburn’s Jacqueline Kasler in a tight, straight-set victory, 7-6 (8), 7-5, in the Flight 3B draw.

Wolf will advance to face her second-straight top-20 opponent, No. 18 Anouk Tigu of Arkansas Saturday, and Morton will take on Florida’s Olivia Janowicz.

“That was a huge win for Whitney,” head coach Tony Minnis said. “That’s the highest-ranked player she’s ever beaten. Ariel also stepped up today, coming through as a freshman in a really tight match.”

The freshman doubles duo of Morton and Hayley Everett also got off to a nice start. After falling to Vanderbilt’s Rachael Dillon and Megan Gornet in Round 1 of the Flight 5 draw, the tandem rebounded in Round 2, sweeping Kentucky’s Meredith Morrow and Nicole Scates, 8-0.