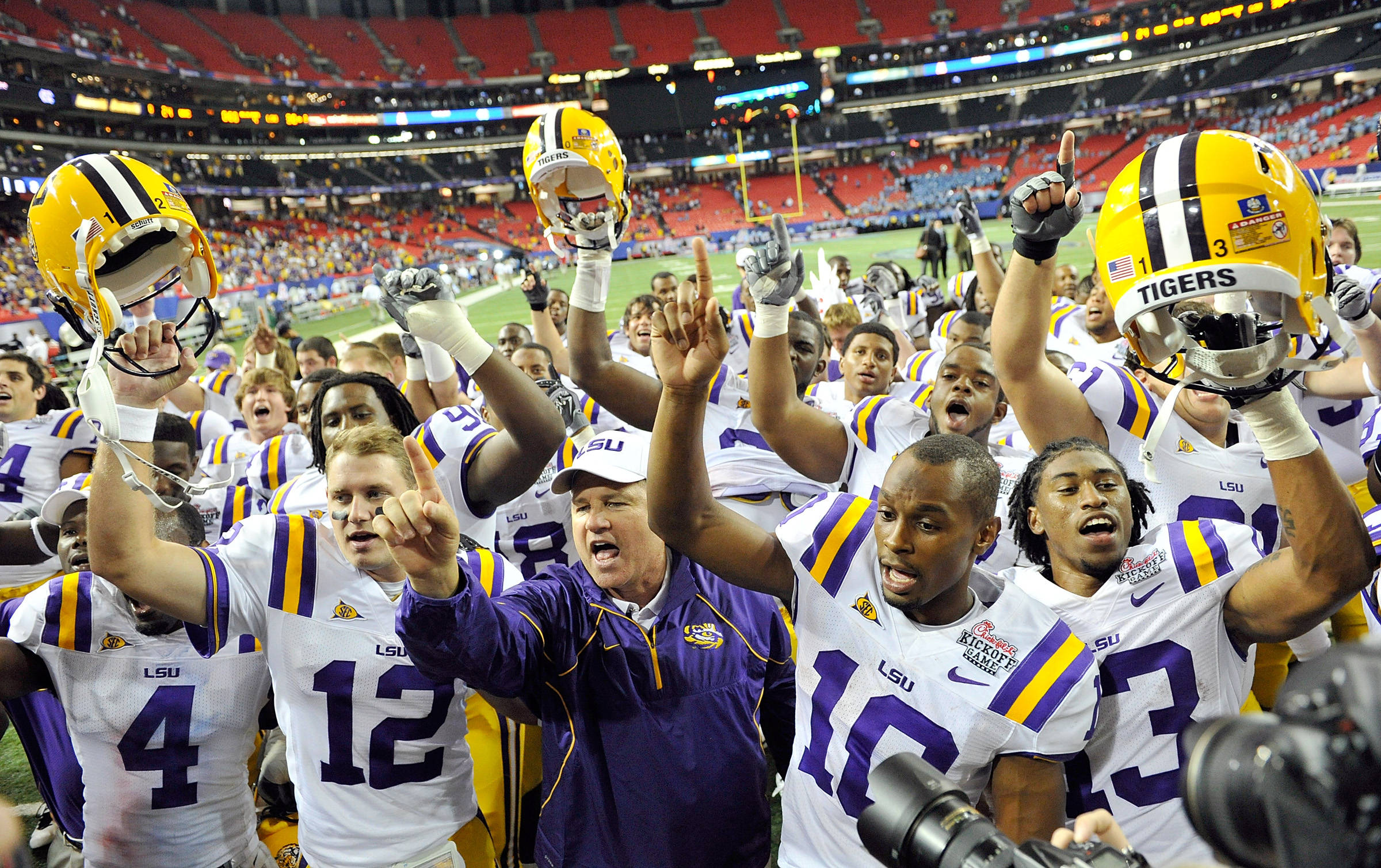 BATON ROUGE – LSU remains on the road for the second straight week on Saturday as the No. 16/19 Tigers travel to Nashville to face Vanderbilt in the Southeastern Conference opener for both teams.

Kickoff for the contest is scheduled for 6:05 p.m. CT and can be seen on ESPNU. The game will also be broadcast on the LSU Sports Radio Network and in the Geaux Zone on LSUsports.net.

LSU goes into the contest with a 1-0 record following last week’s 30-24 win over North Carolina in the Chick-fil-A Kickoff Game in Atlanta. The Tigers bring a school-record 14-game winning streak during the month of September into the contest. Vanderbilt, under first-year coach Robbie Caldwell, is 0-1 after dropping a 23-21 decision to Northwestern last weekend.

A week ago, LSU played 18 first-timers, including eight true freshmen, nine redshirt freshmen. The Tigers also had eight players start for the first time in their career. LSU got some good news this week as starting linebacker Ryan Baker along with backup safety Karnell Hatcher and backup wide receiver Chris Tolliver all returned to action. All three are expected to play on Saturday.

Saturday’s game will be LSU’s first trip to Nashville since 2005 when the Tigers posted a 34-6 win over the Commodores. Last year, LSU beat Vanderbilt, 23-9, in a rain-soaked Tiger Stadium.

“We’ve had a good week of practice,” LSU coach Les Miles said. “I liked the intensity and focus that we had on the practice field this week. We have continued to emphasize finishing and ball security.

“I think our guys understand that we have to take care of the football and to finish off games when we have that opportunity. We have upped the intensity in our ball security drills this week so we will see how that pays off when we get to Saturday.”

Last week, LSU lost four fumbles – one on the North Carolina 12-yard line and the other on the UNC 18-yard line – in the win over the Tar Heels.

Offensively, the Tigers will continue to look for big plays from its trio of wide receivers – Russell Shepard, Terrence Toliver and Rueben Randle – along with consistent play from quarterback Jordan Jefferson. Last week, Shepard scored a pair of touchdowns, including one on a 50-yard run, while Randle caught a 51-yard TD pass from Jefferson.

Jefferson finished last week 15-of-21 for 151 yards and two touchdowns, the ninth time in 15 starts that he’s thrown for at least a pair of scores in a game. Jefferson is the second-winningest active quarterback in the SEC with a 10-5 mark as LSU’s starter.

In the backfield, Stevan Ridley leads the way after rushing for 81 yards on 19 carries last week.  Ridley did put the ball on the ground twice, halting potential scoring drives for the Tigers inside the North Carolina redzone.

“I let my team down,” Ridley said earlier this week when asked about his fumbles in the first game. “My main focus is to prepare to make the right cut, make the right reads, and picking up the blitz protection. You have to have ball security.”

Ridley is expected to share carries with Richard Murphy against Vanderbilt. Murphy had two carries for minus 1-yard in the season-opener. Three freshmen – Michael Ford, Alfred Blue, and Spencer Ware – are also expected to see action in the backfield on Saturday.

Defensively a week ago, LSU allowed just 24 yards rushing to North Carolina as the Tigers recorded 15 tackles for losses and four sacks in the win over the Tar Heels. The 24 rushing yards was the second-lowest total in a season-opener by an LSU team dating back to 1970.

Linebacker Kelvin Sheppard led the Tigers with 10 tackles a week ago, while true freshman Tyrann Mathieu had one of the best all-around efforts by a Tiger in his debut with nine tackles, one sack for a 19-yard loss, two tackles for losses and a forced fumble late in the fourth quarter.

The key for the LSU defensive unit will be staying off the field as the Tigers were on field for 79 plays and nearly 35 minutes in the season-opener.

Special teams play – in particular that of Patrick Peterson – was a highlight for the Tigers a week ago as Peterson set a school-record with 257 return yards (157 punt, 100 kickoff). Peterson was named the SEC Special Teams Player of the Week for his performance and has now been included in conversation about the Heisman Trophy. Peterson, who returned a second quarter punt 87-yards for a score, added five tackles on the defensive side for the Tigers.

Against Vanderbilt, the Tigers will face a Commodore team that is also youthful with eight new starters and 10 true freshmen seeing action in the opener against Northwestern. The Commodores rolled up 432 total yards in the contest – 240 passing, 192 rushing – with quarterback Larry Smith leading the way. Smith threw for 240 yards and three scores and added another 48 yards on the ground.

“Vanderbilt is a very capable team,” Miles said. “They are very sound on both sides of the ball and they have a veteran quarterback who makes good decisions and manages the game well.

“Defensively, they have some outstanding linebackers and they fly to the football. I’m looking for us to play with intensity and with focus for 60 minutes.”