No. 21 Volleyball Ready for Home Opener 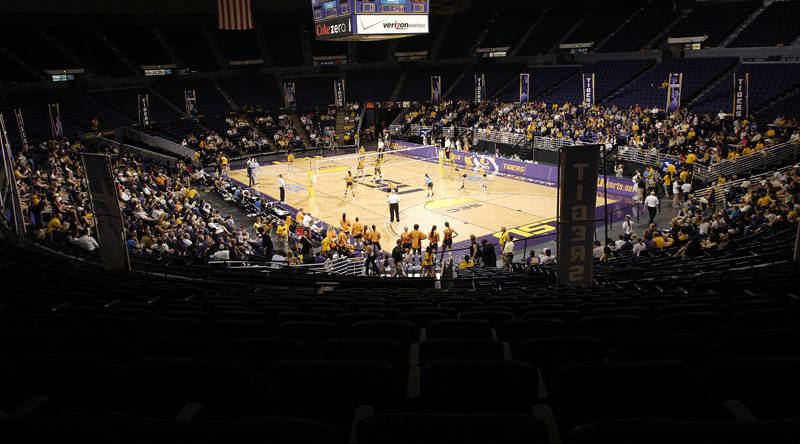 BATON ROUGE – After capturing a pair of tournament titles on the road, the No. 21 LSU volleyball team makes its much-anticipated home debut as New Mexico State, North Carolina and Rice visit the Maravich Center this weekend for the Tiger Classic.

The Tigers (6-0) will unveil a banner to honor the 2009 SEC champions prior to Friday’s home opener at 7 p.m., against North Carolina. Fans also will have the opportunity to pick up a commemorative poster by renowned Louisiana artist and LSU alumnus Jack Jaubert, which celebrates the history of LSU volleyball.

“This will be our toughest tournament of the season by far and one of the premier tournaments nationally of the weekend,” head coach Fran Flory said. “All four teams are NCAA Tournament teams and have postseason expectations again this season with a great chance of winning their respective conferences.”

Angela Bensend has earned All-Tournament accolades in LSU’s first two weekends highlighted by MVP honors at the TCU Molten Invitational. Bensend has reached double figure kills in four of six matches en route to team-best 76 kills at a 4.22 per set ratio to rank second in the SEC.

Lauren Waclawczyk has secured four double digit dig efforts and matched a career-high 26 digs at TCU. Her 4.16 digs per set are fifth in the SEC as Waclawczyk has garnered an impressive .969 reception rating to spark LSU’s back row.

“We’ve developed a great discipline in our system during the first two weeks of the season,” Flory said. “Our players have defined some roles and understand what our expectations are. Angela and Lauren continue to do an excellent job of setting the standard in the gym with great leadership and work ethic. It’s a huge positive this team is already taking on that personality.”

Brittney Johnson has passed out the second-most assists in the SEC at 10.58 per set and became the newest member of LSU’s 1,000-assist club last weekend. The Baton Rouge native has set the Tigers to over a .300 hitting percentage on three occasions. LSU connected for a .509 mark against Alcorn State, which marked the first time that the Tigers have hit over .500 for a match since 1992.

Michele Williams and Desiree Elliott continue to be forces in the middle for the Tigers. Williams has smacked 65 kills on a .350 hitting percentage and added 27 blocks. The 1.29 blocks per set average is second, while the .390 hitting clip is 10th in the SEC. Elliott boosted her hitting percentage by over 200 points between the two weekends.

“Desiree is very difficult to defend and a little unorthodox with some things,” Flory said. “She’s so fast, and we feel that we use her speed very well in our system. She fits right in and is paying huge dividends for us right away.”

“Madie had a coming out time during the spring,” Flory said. “She’s put the ball away with great authority and developed more shots. Her shot selection also has improved and hitting efficiency has increased significantly.”

Sam Delahoussaye and Meghan Mannari have reeled in 48 digs apiece as LSU’s defense has held its opponents to a SEC-best .091 hitting percentage. The duo also is ranked among the SEC’s Top Six in aces per set.

“Sam and Meghan do a great of job of making the amazing play that no one in the gym thinks is possible,” Flory said. “Not only do they get the tough ball up, they get it up to target and give our offense great transition chances. They have really stabilized our defense for us.”

First serve for Friday’s match against North Carolina is on-tap for 7 p.m., with live video and live stats available on LSUsports.net. Fans also can follow live in-match updates on the team’s official blog at http://lsuvolleyball.posterous.com.