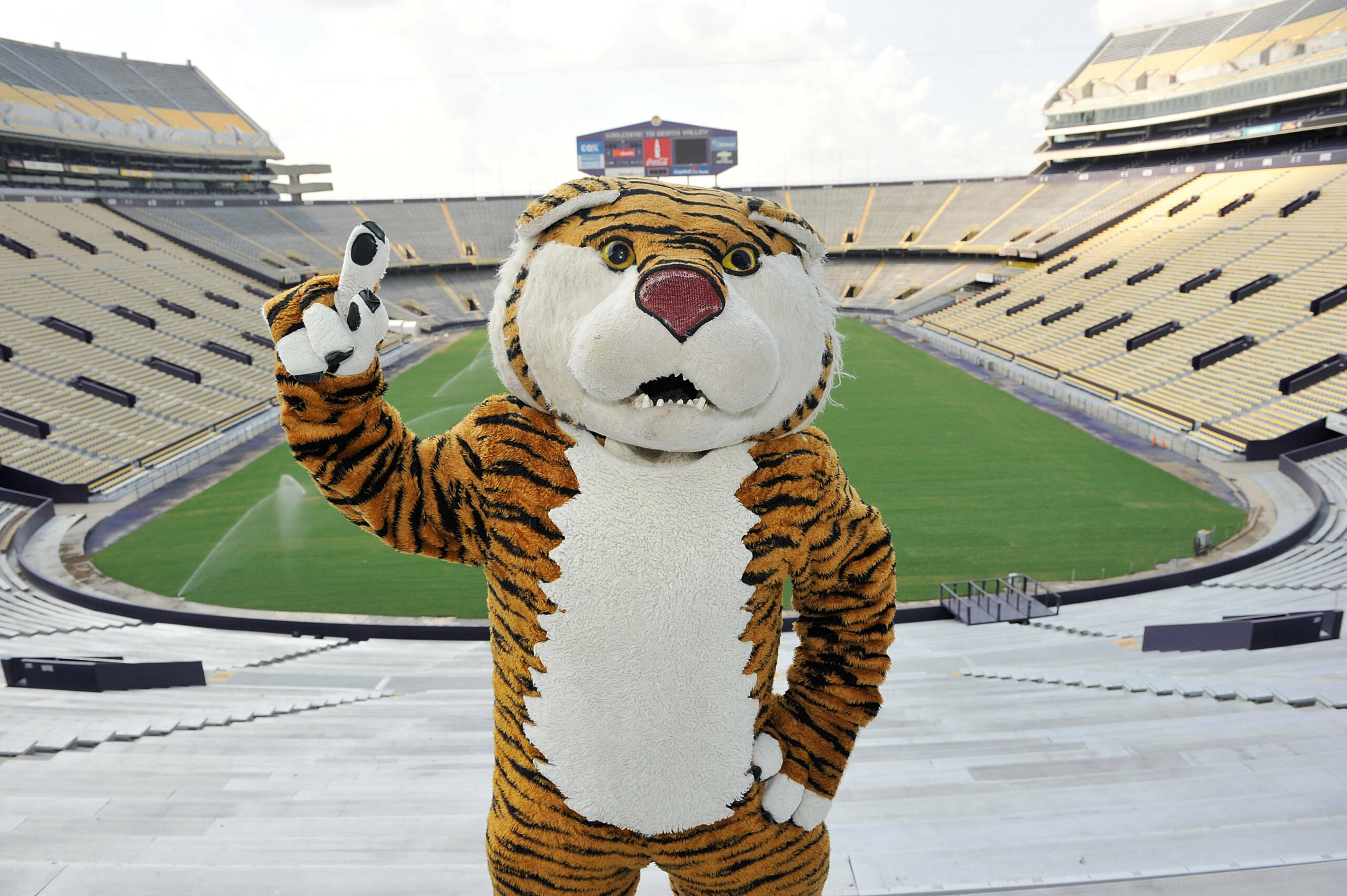 BATON ROUGE – LSU’s mascot “Mike the Tiger” received one of the highest honors in his field when he was named today by Capital One Financial Corporation to its ninth annual Capital One All-America Mascot Team.

This year’s team represents the breadth of college football teams and their fans — ranging from the glitz of UCLA’s Joe Bruin and the history of Ohio State’s Brutus Buckeye to the mononymous mascots Smokey (University of Tennessee), Duck (University of Oregon) and Testudo (University of Maryland).

“It’s a great honor to be named to the All-America Mascot Team,” said Mike the Tiger through a mascot interpreter. “Mike looks forward to representing my school with honor and bringing home the scholarship funds on January 1.”

With their cartoonish, oversized heads, the All-American mascots will compete throughout the 2010 college football season to claim the coveted title of “Capital One National Mascot of the Year”. Each participating school’s mascot receives $5,000 for its university mascot program, and the Capital One National Mascot of the Year receives an additional $15,000 scholarship to help fund its school’s mascot program. The winner will be announced at halftime of the Capital One Bowl game, airing on ESPN at 1 pm EST from Orlando, Fla., on Jan. 1, 2011.

Immediately following the announcement, the nation’s largest mascot coalition — the United Coalition of College Mascots (UnitedMascots.com) — issued a statement calling for fans to support their mascots, who deserve their day in the sun (with water breaks at regular 15 minute intervals, of course).

“We appreciate Capital One’s longstanding support for our way of life,” the University of Montana mascot Monte, chairman of the United Coalition of College Mascots, said through a mascot interpreter. “We work just as hard as the athletes we represent. And when the games are over, we also head to class and hit the books, despite our challenges fitting into classroom seats.”

The Capital One National Mascot of the Year is determined through fan voting. Each week throughout the college football season fans visit capitalonebowl.com to vote for their favorite All-American Mascot. Voting consists of 12 weekly head-to-furry-head match ups between the All-Americans, with fans being able to vote daily at capitalonebowl.com for their favorite mascots. The mascots with the best win/loss records face off in online playoffs starting November 22, and the winner will be pronounced Capital One National Mascot of the Year on January 1, 2011 during the Capital One Bowl.

“We’re proud to help recognize and celebrate the hard work of these unsung heroes,” said Pam Girardo of Capital One. “And with the University of Cincinnati’s Bearcat returning to defend his title, we expect a spirited effort by all 16 mascots looking to be named the Capital One Mascot of the Year.”

Fans can also follow this year’s Capital One National Mascot of the Year competition at www.Facebook.com/MascotChallenge or www.Twitter.com/CapitalOneBowl.

About Capital One
Capital One Financial Corporation (http://www.capitalone.com/) is a financial holding company whose subsidiaries, which include Capital One, N.A. and Capital One Bank (USA), N. A., had $117.3 billion in deposits and $197.5 billion in total assets outstanding as of June 30, 2010. Headquartered in McLean, Virginia, Capital One offers a broad spectrum of financial products and services to consumers, small businesses and commercial clients. Capital One, N.A. has approximately 1,000 branch locations primarily in New York, New Jersey, Texas, Louisiana, Maryland, Virginia, and the District of Columbia. A Fortune 500 company, Capital One trades on the New York Stock Exchange under the symbol “COF” and is included in the S&P 100 index. Capital One, an NCAA corporate champion, began its affiliation with college sports with the sponsorship of the 2001 Capital One Florida Citrus Bowl (now the Capital One Bowl) and ESPN’s Capital One Bowl Week. In addition, Capital One sponsors the ABC College Football Halftime Report, all 88 NCAA Championships including the Division I Men’s and Women’s Basketball Championships, and numerous other collegiate athletics programs.