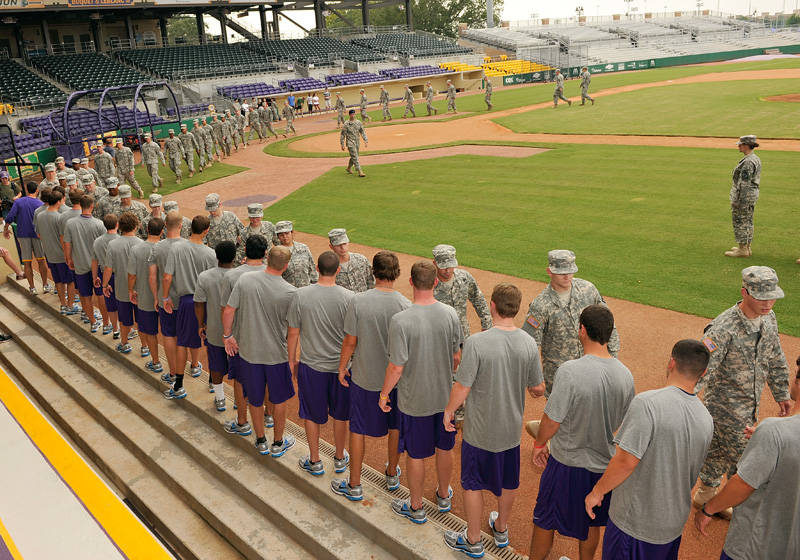 LSU coach Paul Mainieri and his players observed the ceremony as 11 cadets took an “Oath of Obligation,” affirming their commitment to the United States, the President and the Army. The cadets stated their desire to fulfill the duties required to complete the ROTC Advanced Course and become Second Lieutenants in the Army.

“LSU Baseball and Alex Box Stadium were requested as the site for this momentous occasion for several reasons,” explained CPT William Conger, Recruiting Operations Officer for LSU Army ROTC. “First, LSU Army ROTC wanted to conduct the ceremony in a special location that would be something that the cadets would be able to cherish for a lifetime. Alex Box Stadium is named for Second Lieutenant Alex Box who was an LSU Army ROTC Graduate that was killed in action during WWII. Simply put, “The Box” is a special place because it bears the name of one of our own.

“Second, LSU Army ROTC shares a very special connection with Coach Mainieri. Not only has he had a military connection in the past as the coach at the Air Force Academy; he has also graciously visited with our cadets to discuss his leadership philosophy, and has made a verbal commitment of support to each of them as patriots of this great country. “

Mainieri said he and the Tigers were grateful to be a part of the ceremony.

“The men and women of our military are people of great character and courage, and we were honored to be included in such a significant ceremony,” Mainieri said. “LSU has a tremendous military history, and I wanted our players to understand what the soldiers mean to our country and our way of life.”

Conger said the final reason Alex Box Stadium was selected as the ceremony site was ” because of what it represents to so many LSU Fighting Tigers, a ‘House of Champions.’ Many great players have stood at home plate in “The Box” and have, through hard work, tenacity, determination and a willingness to never quit, driven in that game-winning run, particularly during the 2009 NCAA Championship season.

“These are the same attributes that our cadets possess as future Army officers so there is a connection between the baseball team and the cadets. Having Coach and the team participate was Louisiana lagniappe that took the ceremony from being really cool to being an event of a lifetime.”