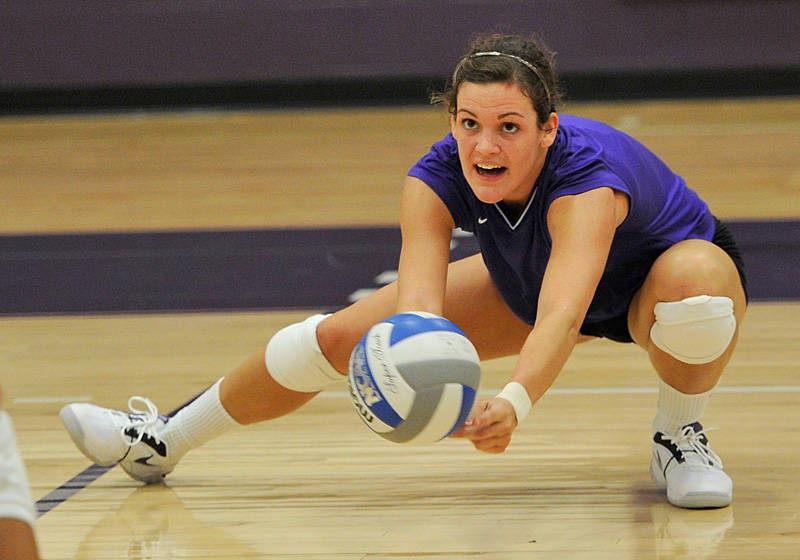 Angela Bensend, OH, Sr., Plano, Texas
Bensend headlined the defending SEC champions to another 3-0 weekend and notched Tournament MVP honors at the TCU Molten Invitational. She powered home 4.33 kills per set to vault up to second place in the SEC rankings and secured 3.89 digs per set, a full dig over her season average. The Plano, Texas native cranked five or more kills in four frames and belted a career-best 20 kills to go along with a career-high 26 digs at TCU, a 2009 NCAA Tournament Second Round opponent. It marked LSU’s first 20-20 performance since Marina Skender against Alabama during the 2006 campaign. Bensend also slapped 14 kills and connected for a .360 hitting percentage against Central Arkansas.

Lauren Waclawczyk, DS, Jr., San Antonio, Texas
Waclawczyk continued her strong play on LSU’s back row as the Tigers compiled another 3-0 weekend and won the TCU Molten Invitational title. The Tigers, one of four remained undefeated teams in the SEC, limited their opponents to a .115 hitting percentage for the weekend as Waclawczyk garnered 4.33 digs per set. The San Antonio, Texas native equaled a career-high 26 digs at TCU, a 2009 NCAA Tournament Second Round opponent, in addition to registering five or more digs in four of her nine sets of action.  She also passed out 0.89 assists per set and tallied a perfect-passer rating in 20 attempts against the Horned Frogs.

Desiree Elliott, MB, Fr., Cypress, Texas
Elliott was a key part of LSU’s second consecutive undefeated weekend and picked up All-Tournament Team accolades as the Tigers won the TCU Molten Invitational title. Elliott ripped a pair of double figure kill performances highlighted by a career-best 11 spikes on a .471 hitting percentage against Central Arkansas. She followed that up with 10 kills on a .300 hitting clip at TCU, a 2009 NCAA Tournament Second Round opponent. She also notched 0.45 blocks per set as LSU held its opponents to a .117 hitting ratio.

Notes on the Tigers
Angela Bensend, Desiree Elliott and Michele Williams picked up All-Tournament Honors. Bensend ripped 4.33 kills per set highlighted by a career-best 20-kill effort at TCU. She also reeled in a career-high 26 digs versus the Horned Frogs and posted LSU’s first 20-20 effort since Marina Skender against Alabama during the 2006 season. Desiree Elliott tallied a pair of double figure kill efforts, while Michele Williams equaled a career-best 16 kills and posted eight blocks against TCU. Madie Jones posted double figure kills for the first time in her career with 11 kills on a .500 hitting clip against Central Arkansas and followed up with a 12-kill effort which included three critical sideout spikes deep in the fifth set versus TCU. Nicole Willis tallied her first career kills against Alcorn State. Brittney Johnson handed out 10.45 assists per set sparked by 51 helpers against TCU. LSU’s back row defense was stellar as the Tigers limited their opponents to a .115 hitting percentage for the weekend. Against TCU, the Tigers had five players registered double digit digs for the first time since the Tigers emerged with a five-set upset of No. 13 Tennessee in 2006. Meghan Mannari matched her career-high with 12 digs versus the Horned Frogs. LSU makes its much-anticipated home debut as North Carolina, Rice and New Mexico State visit the Maravich Center for the Tiger Classic.