LSU to Open 2011 at Cowboys Stadium vs. Oregon 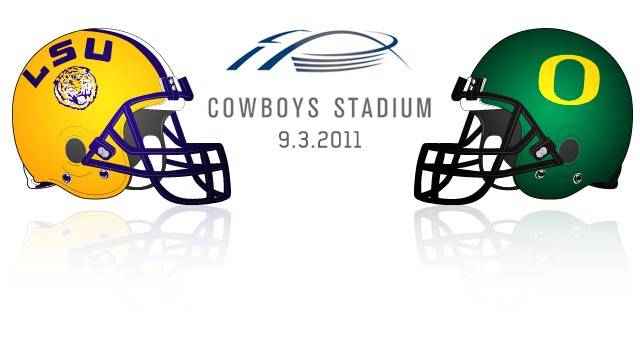 Billed as the “Cowboys Classic”, LSU and Oregon will square off for the fourth time in football in what is the home of the NFL’s Dallas Cowboys. The Tigers and Ducks also played in 1932, 1934 and 1977, with LSU leading the series 2-1.

The LSU-Oregon contest will mark the second consecutive year in which the Tigers will open the season at a neutral site and on prime time national television. LSU opened the 2010 season last week with a 30-24 victory over North Carolina in the Chick-fil-A Kickoff Game in Atlanta.

The LSU-Oregon game has been slotted for a prime time kickoff on Saturday, Sept. 3, 2011 on either ESPN or ABC.

“This will be a great opportunity to showcase our football program on national television against a quality opponent from the Pac-10,” Alleva said. “Cowboy Stadium is perhaps the finest football venue in the country and to be able to bring our team and our fans to that facility will be a tremendous experience for everyone involved.

“The Dallas area also has one of the largest LSU alumni bases outside Louisiana so it will be exciting to bring our football program and the LSU football experience to the state of Texas for a game.”

In other football scheduling news, LSU has added games to future schedules, hosting Western Kentucky in 2011, Idaho in 2012, Furman and UAB in 2013, Georgia Southern in 2014, Jacksonville State in 2015, and South Alabama in 2016. LSU also announced that its game against Southern Miss, originally scheduled for next year, has been moved to the 2016 season.