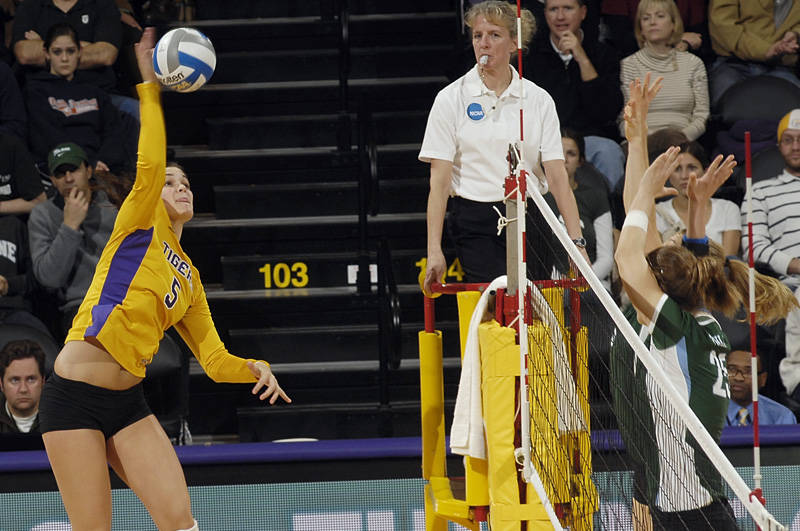 “Our team showed great resilience, and I was impressed with how we fought back,” head coach Fran Flory said. “I can’t say enough about Angela’s performance, she was the heart of our team and did a little bit of everything throughout. She was the stabilizing force that led our young team to this win tonight. We chose to come to this tournament because TCU is a tough place to play. They’re all over you, very similar to a lot of SEC venues.

Brittney Johnson passed out a match-high 51 assists and equaled a career-best with 15 digs for her second double-double of 2010. The Baton Rouge native also popped seven kills and added a pair of aces.

Desiree Elliott was the fourth Tiger to reach double figure spikes with 10 kills on a .300 hitting percentage and distributed four assists, while Tania Schatow recorded seven blocks and four kills.

“It was a great match and a learning experience for us,” Bensend said. “We knew we had to stay confident, and we persevered in the end.  During the offseason, we’ve worked hard on defense. I’ve come to love it and worry about hitting later.”

LSU’s back row defense was stellar as five players registered double digit digs for the first time since the Tigers emerged with a four-set upset of No. 10 Florida last season.

The Tigers racked up 103 total digs highlighted by Lauren Waclawczyk, who joined Bensend and reeled in a career-high 26 digs of her own. Delahoussaye notched 15 digs with Johnson, while Meghan Mannari tied a career-best with 12 digs.

LSU raced out to a 6-0 lead in the deciding frame behind a strong Waclawczyk serving run. Bensend and Williams connected for kills, while Williams and Schatow ignited the Tigers with two blocks. The Horned Frogs responded with seven of the next nine points to draw back to 8-7.

Out of a LSU timeout, the Tigers turned to Jones. She powered home three huge sideout kills from the outside to push the LSU advantage back to 12-9. Bensend slapped the final two spikes to cap her first 20-kill performance and secure the 15-11 triumph.

“Madie struggled a little during the middle of the match. We were trying to create for her and couldn’t get her the ball in the right situation,” Flory said. “I told her before the fifth that she had to take us home and she told me she had it. Those three swings were match-makers for us.”

TCU ran out to a 19-10 advantage in set one capped by a Kristen Hester ace. The Tigers fired back on Waclawczyk’s serve and forced the Horned Frogs into six straight attack errors highlighted by quartet of block, all involving Williams, to pull back to 19-18.

LSU caught TCU on three separate occasions at 23-23, 24-24 and 25-25 before Schatow knocked a kill on a slide and paired with Elliott for a block to emerge to wrap up the 27-25 comeback win.

The Tigers cranked up the offense during the second set en route to 22 kills on a .362 hitting percentage. Bensend contributed eight kills as LSU led a majority of the frame. TCU got within 19-17, but the Tigers used consecutive kills by Johnson and Elliott to reclaim the momentum for the 25-19 victory.

The Horned Frogs took set three 25-20 by running off the last five points of the frame and came away with a 25-18 win in the fourth set to level the match.

Irene Hester and Meghan Horio compiled double-doubles for TCU. Hester hammered 23 kills and corralled 12 digs, while Horio, the Horned Frog libero, moved to setter at the end of the first set. She dished out 37 assists to go along with 17 digs.

“We knew TCU is a solid team,” Flory said. “Their setter [Megan Munce] who is great player got injured at the end of the first set. I’m sad she went out. At the same time, I’m proud how our team finished that set. We’re a very difficult team to beat when we decide to play our tempo and discipline.”

LSU concludes the TCU Molten Invitational Saturday against Alcorn State. First serve is on-tap for 11 a.m. and live stats are available on LSUsports.net