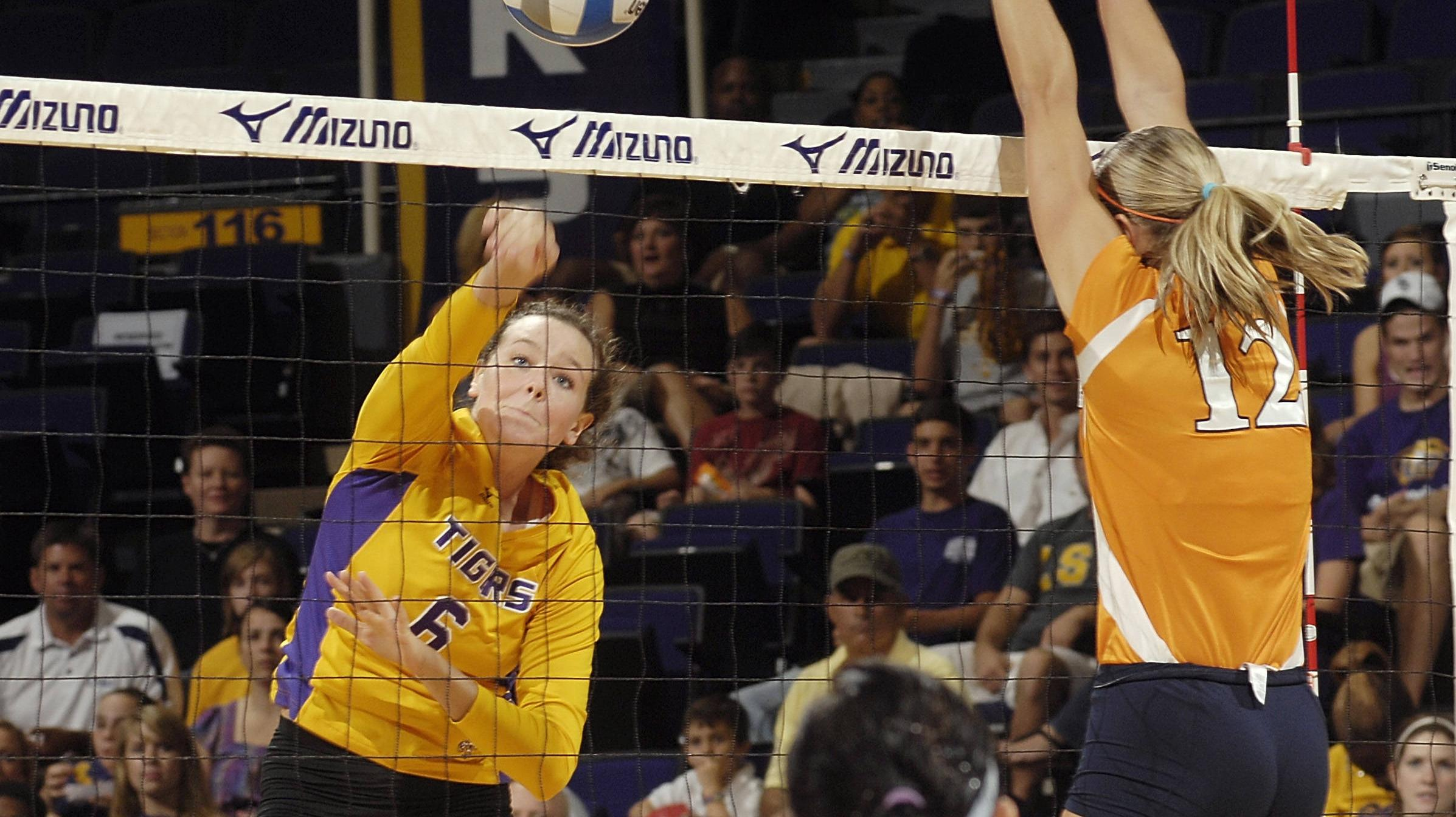 FORT WORTH, TEXAS – Brittney Johnson dished out 42 assists to trigger the No. 21 LSU volleyball team to a .370 hitting percentage and a 3-0 sweep over Central Arkansas [25-20, 25-20, 25-15] Friday to open the TCU Molten Invitational at the University Recreation Center.

Johnson added five digs, three digs and two aces. The Tigers (4-0) have ripped over a .300 hitting clip in seven of their last nine sets with Johnson as the primary setter.

“Our team put a lot of balls away, and I was proud of the hitting percentage because it showed our offensive efficiency,” head coach Fran Flory said. “Central Arkansas is a scrappy team and challenged us to match them defensively. This is a great type of match, both style and tempo, for our team to play. It will help us prepare for the rest of our season.”

LSU had three hitters connect for double figure kills headed by Angela Bensend with 14 spikes. The Tigers have emerged with wins in 17 of 18 matches when Bensend reaches double-digit kills over her career. Desiree Elliott and Madie Jones made the most of their 35 combined swings and smacked 11 kills apiece, a career-high for both players.

Michele Williams tacked on nine kills and a pair of blocks. On the back row, Sam Delahoussaye and Lauren Waclawczyk posted 11 and 10 digs, respectively. Meghan Mannari added five digs and matched a career-best with four assists.

“We wanted to come in and prove that last weekend was the type of team we really are,” Jones said. “This week in practice for me was about controlling my speed and kicking off the net. The coaches are geniuses because it was a big improvement which helped me see the block better.”

UCA jumped out to 6-0 lead during the first set behind three Nagy kills coupled with a pair of LSU hitting miscues. The Tigers pieced together 17 of the next 23 points to grab a 17-12 edge of their own and maintained the momentum for a 25-20 win as Bensend and Elliott powered home seven kills each.

“Central Arkansas jumped on us right off the bat,” Flory said. “I thought our kids did a great job of clawing back. Angela Bensend stepped in with some great leadership and took us most of the way. We also worked this week in practice to create better opportunities for Desiree and helped her select the right type of shot to hit depending on the situation.”

Jones popped all 11 of her kills over the final two sets. Her first kill gave LSU a 5-4 lead in the second frame, while back-to-back spikes on consecutive sideouts pushed the spread to 18-13. The Tigers never looked back en route to another 25-20 triumph.

LSU’s offense saved its best effort and cranked a scorching .556 hitting percentage during the third set. The Tigers turned up the serving intensity with two Delahoussaye aces followed by a Waclawczyk ace to build an 11-6 advantage. Johnson fed Jones and Williams for five kills apiece to allow LSU to cruise to a 25-15 victory and secure its third straight sweep.

“Madie struggled to catch a rhythm [last weekend], but 11 kills on 18 swings is an outstanding performance for her to start this weekend,” Flory said. “She can really put the ball on the floor when she gets going. It’s a faster tempo for her and Brittney did an excellent job of finding her.”

LSU returns to action versus TCU Friday at 7 p.m. to wrap up day one of the TCU Molten Invitational. Live stats and video are available at LSUsports.net.

“We’re going to have to play better tonight and win those momentum changing plays to be successful,” Flory said. “Great teams make those big plays when it counts and when their back is against the wall. Tonight will be a great test for our team.”